In 1985, a Naxi doctor He Shixiu opened the Yulong Snow Mountain Herbal Clinic on the street of Baisha town, which is famous for treating tracheitis, stomach disease, rheumatism and various difficult and complicated diseases. He Shixiu (1923 – 2018), a famous Naxi doctor, is known as one of the “three outstanding doctors of Lijiang”.

Who is Doctor Ho?

He Shixiu was admitted to Shanghai Naval Machinery College for science with the outstanding achievement of Lijiang Top Scholar. Later, due to physical reasons, he transferred to Nanjing Foreign Language College and graduated in 1949.

In 1949, he joined the Second Field Army of the Chinese People’s Liberation Army, and later returned home for recuperation due to tuberculosis. After returning home, He Shixiu inherited his father’s career, carefully studied medical books, collected folk Chinese herbal medicine prescriptions of Naxi nationality, and became a doctor after a long illness, making him a little famous herbal medicine doctor. During the Cultural Revolution, He was criticized ,and after the Cultural Revolution, he was hired to teach English at Lijiang Diqu Middle School and Lijiang Finance School.

In April 1985, He Shixiu’s “Yulong Snow Mountain Herbal Clinic” finally opened. Over the past 30 years since its opening, numerous people have been treated by He Shixiu. The Ethnic Times calls him “A Wonderful Naxi People” and many overseas Chinese newspapers call him “Miracle-working Doctor around the Jade snow mountain area”.

Since its opening on April 7, 1985, Yulong Snow Mountain Herbal Clinic has consistently advocated free treatment for the masses because it uses Naxi folk herbs, which has relieved the suffering of countless patients at home and abroad, thus gradually attracts the attention of many domestic and foreign news media. At the same time, with the increasing number of visitors from home and abroad, the clinic has become an indispensable window for the outside world to understand Lijiang and Naxi people.

Doctor Ho Snow Mountain Clinic is a small clinic of tens of square meters renovated with an old ancestral residence. It is simple and primitive. Compared with modern clinics, they are really very old. But when you enter the clinic, you will be attracted by the house full of banners and objects left by visitors.

Since its opening on April 7, 1985, Yulong Snow Mountain Herbal Clinic has consistently advocated free treatment for the masses because it uses Naxi folk herbs, which has relieved... 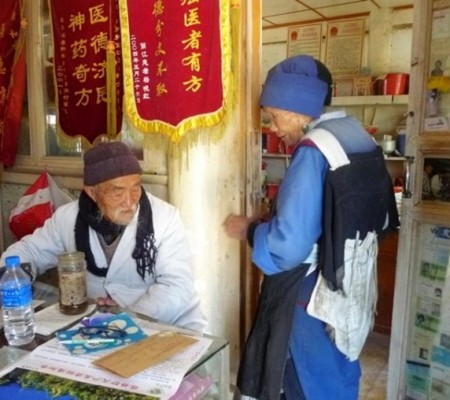 Chinese Name:丽江白沙古镇和士秀医生 English Name: Doctor Ho Shixiu in Baisha Ancient Town, Lijiang He Shixiu (1923 – 2018), a famous Naxi doctor, is known as one of the “three outstanding...