Yunnan abounds in natural resources. It is known as the kingdom of plants, animals and home of non-ferrous metals and medicinal herbs.

A main source of wealth lies in its vast mineral resources; indeed, mining is the leading industry in Yunnan. Yunnan has proven deposits of 86 kinds of minerals in 2,700 places. Some 13% of the proved deposits of minerals are the largest of their kind in China, and two-thirds of the deposits are among the largest of their kind in the Yangtze River valley and in south China. Yunnan ranks first in the country in deposits of zinc, lead, tin, cadmium, indium, thallium and crocidolite. Other deposits include iron, coal, copper, gold, mercury, silver, antimony and sulfur. More than 150 kinds of minerals have been discovered in the province. The potential value of the proven deposits in Yunnan is 3 trillion yuan, 40% of which come from fuel minerals, 7.3% from metallic minerals and 52.7% from nonmetallic minerals.

The province not only has more plant species of tropical, subtropical, temperate, and frigid zones than any other province in the country, but also has many ancient, derivative plants, as well as species introduced from foreign countries. Among the 30,000 species of plants in China, 18,000 can be found in Yunnan.

Yunnan has sufficient rainfall and many rivers and lakes. The annual water flow originating in the province is 200 cubic kilometres, three times that of the Yellow River. The rivers flowing into the province from outside add 160 cubic kilometres, which means there are more than ten thousand cubic metres of water for each person in the province. This is four times the average in the country. The rich water resources offer abundant hydro-energy. China is constructing a series of dams on the Mekong to develop it as a waterway and source of power; the first was completed at Manwan in 1993.

Yunnan is endowed with unique energy resources, especially hydropower and coal resources. Geothermal energy, solar energy, wind energy and bioenergy also enjoy good development prospects. 82.5% of the water resources are provided by Jinsha River, Lancang River and Nujiang River, with Jinsha River being the largest, accounting for 38.9% of the total water resources in the province.

Yunnan is attractive with its rich tourism resources, including beautiful landscape, colorful ethnic customs, and a pleasant climate. 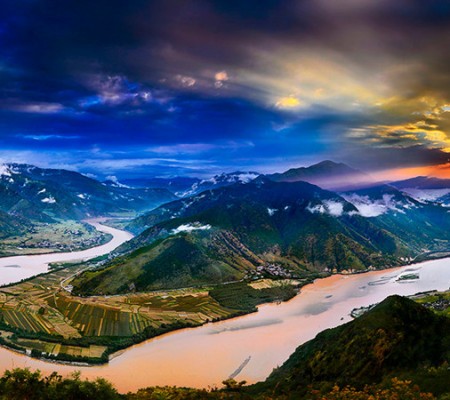