Long history, 25 ethnic minorities, complex terrain and landform and changeable three-dimensional climate determine the ethnic costumes and decorations in Yunnan must be bright and colorful, presenting a splendid sight. Ethnic costumes is the carrier of ethnic culture, and is an important category of ethnic cultural relics. From different costumes, you can identify the different ethnic minorities, can understand the gender, age, occupation and marital status of a minority person. You can also see the festivals, marriage and funeral, religious beliefs, etiquette and other customs of various ethnic groups from their ethnic costumes. To exaggerate, a suit of ethnic dress is the epitome and encyclopedia of a ethnic group.

Costumes of Ethnic Minorities in Yunnan

Yi costumes are colorful, with unique style and nearly 100 forms. Historically, due to the large number of branches of the Yi ethnic minority and the scattered residence, the costumes in different places were obviously different, with different styles and strong regional colors. Yi clothing is mainly divided into 6 types, and distributes in 6 different Yi areas. However, women usually wear clothes embroidered with beautiful flowers, trousers with delicate lace or skirts with many pleats. Men like to wear black short-sleeved clothes and loose trousers. Both men and women wear headbands, and the women’s headscarves are embroidered with beautiful designs. Yi clothes are usually hand-made from pure wool, and all of them are hand-made by Yi people from collection, spinning, dyeing, weaving, cutting and embroidery. On November 11, 2014, Yi costumes were approved by the State Council to be included in the 4th batch of national intangible cultural heritage list.

This kind of dress is mainly popular in the counties and neighboring areas of Chuxiong Yi autonomous prefecture in Yunnan. Generally speaking, it is the basic style of modern women’s dress to wear a right lapel jacket and long trousers. The ornamental designs of women’s top are various, and beatiful in colors. Pattern is given priority to flowers and plants like Maying flower, decorated on the the chest, shoulder and other specific parts of jacket. Women’s headwear can be roughly divided into three categories, or more than 40 if subdivided, and each kind of headwear often becomes a symbol of Yi ethnic minority in a certain area. Men’s clothing is becoming more and more Chinesizing and fashionable, but there are still many areas retaining the custom of wearing sheepskin gown(羊皮褂), fire weed(火草) and linen clothing(麻布衣), which is rare in Yi costumes in other areas.

This kind of dress is mainly popular in Honghe prefecture of southern Yunnan, with Jianshui, Shiping, Yuanyang and other counties as the most typical. The dresses of women were very colorful, including both right lapel long gown and short top, and they generally wear long trousers and apron. There are also a variety of headwears decorated with silver pore or floss for embroidery. Clothing tone is extremely strong, and consistent with matching contrasting colors, bright and eye-catching, decorative strong. The patterns are mostly natural patterns, followed by the geometric patterns. Men’s clothing is not very different from other places.

Bai is an ethnic minority in southwest China, mainly distributed in Dali Bai autonomous prefecture of Yunnan province. Bai ethnic minority advocates white, and their dresses are given priority to with white color. White in Chinese is pronounced ‘Bai’, so maybe this is where their name derives from. Women in Dali ethnic minority wear a white coat trimmed with a black or purple collar and blue loose trousers; embroider shoes, silver bracelets and ear rings. Women’s headwear represents Dali’s “wind, flowers, snow and moon”. Men wear tie-dyed mandarin jackets.

Hani people mostly live in the western part of Yunnan province. They are a mountainous farming people who cultivate rice on terraced fields. Their unique living environment has formed a colorful costume culture of Hani people. Hani costume is the essence of Hani traditional culture, which carries extremely rich cultural information and forms a materialized carrier to display and recall the heroic achievements of their ancestors’ migration.

The colors, styles and patterns of Hani costumes are not only the reflection of the geographical environment of the survival region of the ethnic group, but also the identification of the social identity and role of the people. Hani costumes are colorful, with more than 100 different styles. Adapted to the work of terrace farming and having shared embroidery patterns, decorative items and aesthetic colors are the basic features of Hani costume. Hani people think that black is beautiful, solemn, holy and pure, and regard it as auspicious color, life color and protective color. In other word, black is the main tone of Hani costume. The decorative articles and embroidery patterns on the costumes of Hani ethnic minority are essentially the refraction of the geographical environment in which the ethnic group lives, as well as the memory and description of the heroic achievements of their ancestors.

Hani people like the navy blue clothes they weave and dye themselves. Men wear a front opening coat and wrap their heads with black or white cloth; while women’s clothes have a right forepart without a collar. Silver decorations are popular among them to hang.

Dai people live in tropical and subtropical areas, where the climate is damp and hot, with dense forests and abundant products. Dai costumes are elegant and beautiful, practical and decorative, which can reflect the ethnic personality of loving life and advocating the beauty of harmony. Dai men’s clothing varies little from place to place, often wear collarless short gown, long trousres, and white, bright pink or blue headwear. Dai women’s clothing varies from region to region. Dai women in Xishuangbanna wear colorful body-hugging underwear with a tight collarless and narrow sleeve blouse, and a colorful long skirt with a exquisite silver waistband. Some of the Dai women in Dehong prefecture wear long skirt and short gown with bright colors, while some Dai women in Luxi and Yingjiang wear white or other light-colored blouses, trousers and embroidered aprons. Huayao Dai people in Xinping, Yuanjiang area wear short gown, black skirt decorated with colorful cloth and silver pore forming various patterns. All kinds of Dai women’s clothes can show the graceful appearance of women. Dai women love to wear long hair, tied in the top of the head, decorated with a comb, flowers, headcloth or bamboo hat.

Zhuang costumes in different areas are varied. Compared with the Han style, Zhuang men’s wear is hardly different. However, Zhuang women have costumes in many different styles. For example, some Zhuang women wear the collarless, embroidered jackets buttoned to the left along with loose and wide trousers, or pleated skirts and embroidered belts. Some prefer collarless jackets buttoned to the left with black square headbands on the head and loose trousers. Most of them decorate their outfits with silver ornaments.

Miao costume is the most gorgeous costume among all ethnic costumes in China. It is not only a wonderful flower in Chinese culture, but also a treasure of historical culture. In 2006, the Miao costumes declared by Baoshan city of Yunnan province were included in the first batch of national intangible cultural heritage list approved by the State Council. Miao clothes are diverse in different regions. Men wear short coats and trousers, while women decorate themselves with very dainty and dazzling skirts and jewels. On their skirts, there are many patterns based on the theme of life and nature, such as flowers, birds and so on. One of the most attractive features is that their pleated skirts has as many as forty layers.

The main symbol of Hui costume is in the head. Men love white round hats. Hui women often wear hijab. Elderly Hui women wear black or brown headscarves in winter, white gauze scarves in summer. Young women wear red, green or blue headscarves in winter and red, green, yellow and other colors in summer. Hui women in mountain area love to wear embroidered shoes, and have the habit of pierced earrings. Apart from the role of protecting the body and decoration, there are also factors of belief, which constitute the folk characteristics of the Hui costumes. The clothing of Hui ethnic group has distinctive national features. They mainly comprise of waistcoat, Dasdar (the cloth wrapped on head), Maisaihai (leather) socks, Zhunbai (robe), worshipper hat, headscarf, and so on. The waistcoat is made of cloth, silk, thin silk, linen and has types of two-layer, cotton and single-layer. It can be worn both in summer and winter and can serve as underwear and coat. It is convenient for people to fold up the sleeves and do chores.

Wa costumes vary from place to place. Cangyuan Wa men wear the round collar front opening jacket, short and loose trousers, with black or red cloth wrapped around the head. Women wear their long hair, wearing silver or aluminum earrings and necklaces, round collar and narrow-sleeved short garment, as well as straight long skirt, with a variety of decorative design. The Wa costumes of Yongde and Zhenkang are basically the same as those of the local Han nationality.

The ancient and simple Naxi costume is a wonderful work of its traditional culture. The dress colour of young female lays particular stress on more at lively and gorgeous tone, the dress colour of middle-aged and old female uses the blue and black fabric, appears solemn and elegant. Men’s clothing of Naxi ethnic minority in Lijiang area is the same as that of local Han nationality, and is similar to the Han Chinese gown replete with Mandarin-style jacket with buttons. However, the female costume has its own unique features. It consists of a long, unlined gown and a colorful, embroidered cape. The gown is slightly longer in back and reaches to the calf of the leg, and it reaches the knee in the front. Underneath this gown, Naxi women wear trousers, and on their feet they wear the traditional boat-shaped shoes. A Naxi woman’s dress is traditionally in one of three main colors- blue, white or black, and is trimmed with lace about the collar and on the sleeves.

The most distinctive feature of a Naxi woman’s clothing is the cloak on her back. It is made of black sheepskin and embroidered with seven round designs. The seven circular designs represent stars. White and black are the main colors. White symbolizes the sky, while black symbolizes the earth. The sky, earth and stars sewn on the Naxi women’s cloak stand for the diligence of the Naxi people. 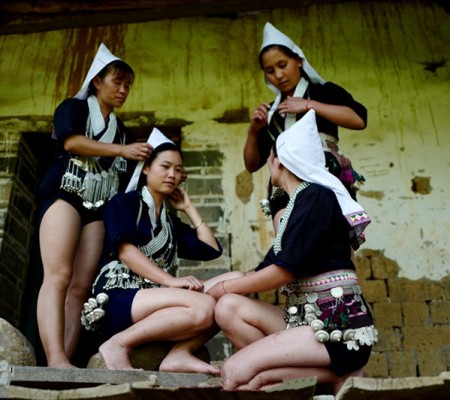 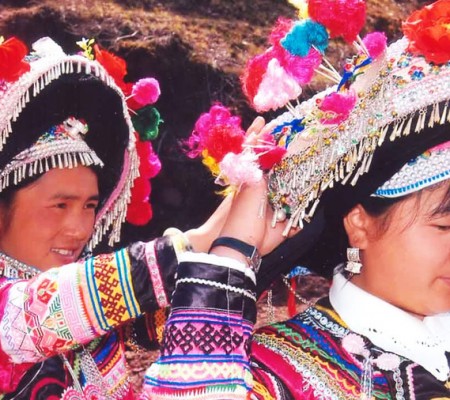 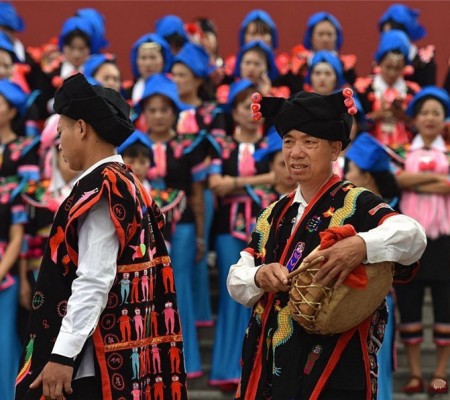 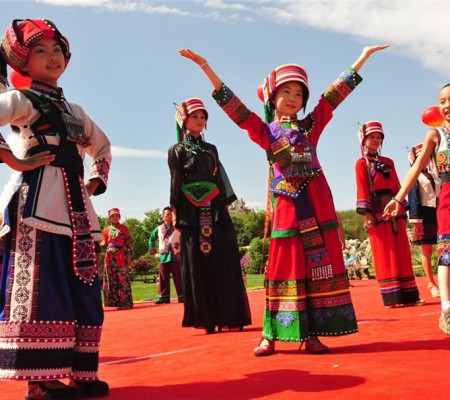