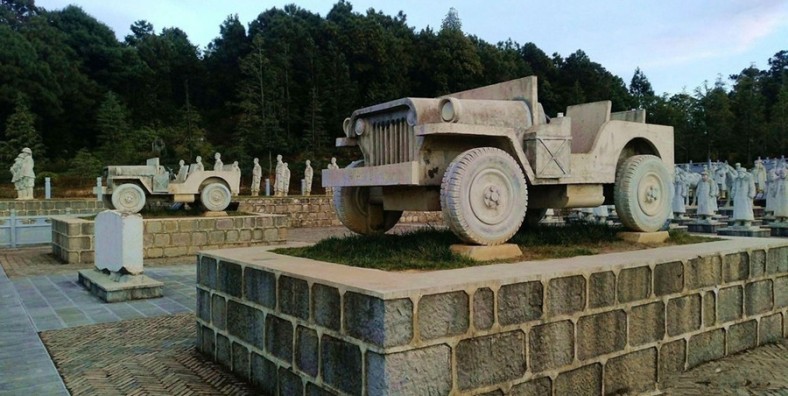 Songshan Battlefield(松山战役旧址), located in Mengla Town of Longling County, was the main battlefield of the Anti-Japanese War in west Yunnan during the second World War. Songshan is the highest peak in Longling County. The terrain is steep and easy to defend. It is known as the “Gibraltar” of the East. It is the most well-preserved battlefield of the WW II, with trenches, bunkers and powerhouse etc. There are also the the monuments built for the fallen soldiers of the Songshan Battle, as well as the martyrs cemetery, hero sculpture, Huitong Bridge and other buildings.

Why is Songshan Battlefield so special?

Songshan Battlefield is the most well-preserved battlefield of the WW II.

Where is Songshan Battlefield?

The Songshan (Pine tree mountain) is located in the Gaoligong mountains range and controls the Burma Road’s approach to the vital Huitong bridge spanning the Nujiang (Salween) river. The Songshan mountain was the fortified base of theJapanese invading forces closing off the Burma Road during WW-II. It is 39 km from the county seat of Longling.

How to get to Songshan Battlefield?

Songshan Battlefield is located in Mengla Town of Longling County, 39 km east of Longling County. Travelers can get to Songshan by taking the bus to Mengla. It will be more convenient to get back by self-driving.

On May 11, 1944, some 32,000 soldiers of the Chinese Expeditionary Force (before known as Y-force) crossed the Nujiang on bamboo rafts and American supplied inflatable boats. Later to be followed by more men and thousands of pack animals. During the Cultural Revolution the Red Guards destroyed the monument because it honoured the Kuomintang army. In 2004 the Songshan monument was reconstructed. Only a few of the original stones, those which were used in the floor of the local school, survived. The now with pine trees overgrown trenches at Songshan still can be seen clearly even after more than 60 years. In 2012 walkways have been constructed to make it easier to visit the battlefield at Songshan Mountain. The Battle for Songshan

On June 4, 1944 the attack on Songshan started. Japanese army forces had dug themselves in there already from well before the campaign and a complex network of fortifications interlinked by trenches covered the mountain. The Chinese dug attack trenches covered by metal plates towards the top while being mortared from above. This First World War style of fighting accumulated into the construction of two, hundred fifty meter long tunnels under the two command bunkers which were blown up with the use of 50 and 70 boxes of American TNT respectively. The holes left by these explosions still can be seen today.

The mountain was finally captured on September 7, after more than three months of heavy fighting at a cost of 7,600 Chinese soldiers and some 3,000 Japanese defenders. On January 20, 1945, after nearly eight months of fighting the whole of Yunnan was freed of the last Japanese invaders.

On January 12, 1945 the first convoy left Ledo in India to arrive on February 4 in Kunming over a road now officially named the “Stilwell road”, a road that combines the original Burma Road and the American constructed Ledo road.

The road enabled the transport of heavy equipment like trucks and artillery pieces to China which had not been possible by air. Thousands of army trucks were sent up the road not to return and to stay in service with the Chinese army.

Parallel to the road was a fuel pipeline which at that time was the longest pipe line in the world and was intended to supply China with fuel and thus would greatly expand the capacity of both the road transport and Hump flights because no longer fuel had to be transported of which a lot was used to fly back to India. A Liberator bomber used as oil tanker for a round trip required three tons of fuel to deliver one ton. However the road played only a limited role during the rest of the war which ended before the road and pipeline were fully operational.

The Kuomintang government erected a monument on Songshan to commemorate the battle. The monument got demolished later by the Red Guards during the Cultural Revolution. The stone slaps were reused among others to pave the floor of the local school. In 2004 some stones were found back and used to erect the monument again also some stones are still missing.

The Songshan battlefield and the Huitong Bridge are on a part of the Burma Road that is no longer actively used and this remoteness gives it a special charm and enables one to reflect on how things ones were. Sit down and imagine an army of 100,000 men and thousands of pack animals coming across the river on bamboo rafts and inflatable rubber boats.

The old Burma road here is a good location for cycling with interesting climbs. From the river up to the top of the Songshan is 1346 metres.

In the changed Chinese political climate more attention is paid to the Kuomintang period and especially since the airing of a TV-series “West Yunnan in 1944” depicting the battle of Songshan and the activities of the Chinese Expeditionary Force.

This attention has resulted in the resent construction of walkways over the former battlefield to ease the visitors. It is hoped that this will not result into a battlefield Disneyland that is often the case in China. The Songshan battlefield as a historic site got forgotten because it was a Kuomintang battle site.

The Songshan monument even got destroyed during the Cultural Revolution by Red Guards.

It was up to the local inhabitants to preserve the history. Just after the war the locals collected the metal parts left behind at the battlefield for their scrap metal value and most remains got molten down. More recently bits and pieces still found in the fields around Songshan are collected by the local farmer and amateur historian Yang Guogang for his private museum he constructed.

He collected as well all the local stories like those of his grandfather who was sent up the mountain to retrieve the wounded soldiers under the cover of darkness. Yang Guogang spend 80,000 Yuan over the last 20 years to build up his collection. A considerable amount of money for a farmer.

Yang Guogang in his museum. This local farmer and historian build the “Songshan Military Campaign Memorial” museum by himself and on his own expense at his own house in Dayakou village next to the Songshan battlefield site. All items come from the area and were bought from local farmers who found them in their fields or are war souvenirs handed down through the generations.

The Huitong Bridge is now preserved as a monument. The present form stems from 1950 when the Eastern bridgehead was rebuilt (Note the communist red star on it). A new bridge was build in 1977 just a few hundred metres downstream.

Statues of Generals and Soildiers

The soldiers of the new Songshan monument are lined up and face the double summit of Songshan Mountain. In 2013 a new monument was constructed at Songshan. Heavely inspired by the Terracotta Warriors in Xi’an this replica army is made out of concrete and instead of chariots there are two American Jeeps. Songshan was the first place in China where Jeeps were used during the war.

Like their terracotta predecessors every statue at Songshan has its individual face and scattered among the Chinese soldiers are the visages of some of their American advisors.

At the time of construction 84 soldiers were still alive out of the 100,000 Chinese forces that were involved in the campaign. These 84 are depicted in their present day appearance. Central in their group is Fu Xin De who was the main physician of the Chinese Expeditionary Force. He was born in 1899 and died at the age of 114 just after the official opening of the monument in September 2013.

The monument is a symbol as well of the changed political climate in China. Until recently the only monuments that were created were those for the PLA. So an monument for Kuomintang soldiers is something new.

If you want to learn more about the Songshan Battle, you can read A story on Yang Guogang and his museum.

There are no books in English describing the “Battle at Songshan” but there are two good Chinese publications:

History and Culture of Songshan Campaign

The “Songshan Battle” book (Left) has an interesting collection of original pictures from both Chinese and Japanese sources. It contains battlefield maps and diagrams of fortifications.

The “History and Culture of Songshan Campaign” book (Right) has chapters on recent excavations, battlefield maps and maps of fortifications, diagrams of fortifications, list of finds with their geographic location and interviews with local people who took part in the action.