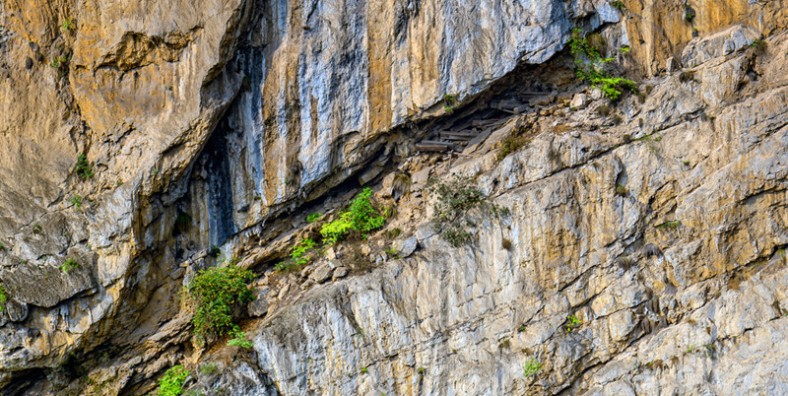 Bo People Hanging coffin burial is a symbol of auspiciousness. The longer the forebears' remains are preserved, the better they can sustain the prosperity of their descendants.

About the Bo People

The Bo people were an ethnic minority in the ancient southwest of China, for their earliest home was an infestation of thorns and tigers and wolves. They went through all kinds of hardships to explore the wilderness and build their homes and were praised as the one who broke open a way through brambles and thorns. The Chinese character 棘(Ji), means brambles and thorns. So they add another Chinese character 人(Ren), which means people under the 棘. Thus it became 僰(Bo). When the Bo people died, they were neither buried nor cremated, but placed in coffins on the cliffs. In the mind of the Bo people, the spirits of the dead should live forever in the hearts of the posterity. The longer the forebears’ remains are preserved, the better they can sustain the prosperity of their descendants. Therefore, hanging coffin burial is a symbol of auspiciousness.

About the Hanging Coffin of Bo People

The hanging coffins of Washi Village are located on the Guanmu Cliff(棺木崖) and Baihu Cliff(白虎岩) in Changan Township(长安乡) of Weixin County(威信县), Zhaotong City. The coffins are generally about 10 meter to 50 meters to the ground. The highest is about 100 meter. There are three ways of placing the coffins. One is to punch 2-3 holes on the cliff and insert wedges to support the coffin, another is to make a horizontal or vertical cave on the cliff to place it, and the last one is to use the natural cave or crack between the rock walls.

The coffin is large at head and small in the end, mostly in a whole wood, and fixed with button and tenon. The burial goods placed on both sides of the foot are pottery, bamboo, iron and hemp. On December 28, 2003, the provincial government announced that Washi hanging coffins were the sixth batch of provincial-level cultural relics protection units, and in April 2013, the state council announced it is the seventh batch of national key cultural relics protection units.