The 26 ethnic groups in Yunnan follow their own religions and beliefs, making Yunnan a multi-religious province. Yunnan is a religious resort well known in China as well as an important place where many world religions gather. Besides the traditional religions, the ethnic groups in Yunnan also believe in  Buddhism, Catholicism, Christianity and Islamism. For more about the four major religions, please read Yunnan Religions.

According to surveys conducted in 2004 and 2007, in those years approximately 32.22% of the province’s population was involved in worship of ancestors and 2.75% declared a Christian identity. Most of the population of the province practices traditional indigenous religions including the Chinese folk religion among the Han Chinese, Bimoism among the Yi peoples and Benzhuism among the Bai people. The Dai people are one of the few ethnic minorities of China that traditionally follow the Theravada branch of Buddhism. Most of the Hui people of the region are Muslims. Christianity is dominant among the Lisu, the Jingpo and the Derung ethnic groups.

Indigenous religions is a category used in the study of religion to demarcate the religious belief systems of communities described as being “indigenous”. This category is often juxtaposed against others such as the “world religions” and “new religious movements”.

Chinese folk religion (also called Chinese popular religion or Shenism) is the most widespread form of religion in China, and among Chinese people worldwide. It is the religious tradition of the Han Chinese, and involves veneration of forces of nature and ancestors, exorcism of harmful forces, and a belief in the rational order of nature which can be influenced by human beings and their rulers as well as spirits and gods.

Bimoism (Chinese: 毕摩教) is the indigenous religion of the Yi people, the largest ethnic group in Yunnan after the Han Chinese. It takes its name from the bimo, shaman-priests who are also masters of Yi language and scriptures, wearing distinctive black robes and large hats. In 1996, the Bimo Culture Research Center was founded. In the early 2010s, the government of China has helped the revival of the Bimoist faith through the construction of large temples and ceremonial complexes.

Benzhuism is the indigenous religion of the Bai people, which consists in the worship of the ngel zex, the Bai word for “patrons” or “lords”, rendered as benzhu (本主) in Chinese, that are local gods and deified ancestors of the Bai people. It is very similar to common Chinese religion. While many of the Bai are Buddhists, the local government of China has recently helped the revival of the Benzhu ethnic religion, for example through the promotion of the Gwer Sa La festival.

Lijiang is the main settlement where Naxi ethnic minority is inhabited, which is the only Naxi autonomous county in China. The Naxi people believe in Dongbaism. The term dongba refers to priests of the Nakhi people of Southwest China, who are masters of traditional culture, literature and Dongba symbols. The dongba are Bon priests. They play a major role in Nakhi culture and preach harmony between man and nature. Their costumes show strong Tibetan influence, and pictures of Bön gods can be seen on their headgear. Tibetan prayer flags and Taoist offerings can be seen in their rituals.

Now, Islam has spread all over Yunnan Province, mainly in Kunming, Yuxi, Honghe, Wenshan, Dali, Baoshan, Zhaotong, Chuxiong, Simao, and Qujing prefectures and municipalities. It is believed by the Hui, some Dais, Bais, Tibetans and Zhuangs. Muslim population in Yunnan are about 698265 by 2010, there were 717 mosques in service, 11 qubbahs (domed buildings) and Yunnan Branch of the Islam Association of China was founded in 1984 and its office is set in the Shunchen Mosque in Kunming.

Christianity is a minority in Yunnan province of China. There are two divisions of Christianity in Yunnan Province: Protestantism and Catholism. There are more than a million Protestants in the province. Yunnan has persecution of Christians. Fugong has a Christian majority. Nujiang has a notable Christian minority. Yunnan has Hmong Churches and many Lisu Churches. Han Chinese are a minority among the Christians in the province. The Roman Catholic Church, affiliated directly with the Vatican, has approximately 60,000 members in Yunnan. Membership is composed primarily of Yunnan’s ethnic minority communities.

Chinese ancestor worship, is an aspect of the Chinese traditional religion which revolves around the ritual celebration of the deified ancestors and tutelary deities of people with the same surname organised into lineage societies in ancestral shrines. Ethnic groups in Yunnan including Yi, Jingpo, Lahu, Hani also practice sacrificial ceremonies to their ancestors.

Reproduction worship has existed throughout history. It successivlely went through three stages: phallicism, totemism and ancestry worship.The practice of reproduction worship had its definite utilitarian purpose: praying for growth of population. For example, the Bai women in Yunnan have taken Ayangbai (a stone carving symbolizing female genitalia) in Jianchuan Grottoes as their child-seeking object to pray for the prosperity of the population. Moreover, there is a stone pillar on Manhe Mountain in Xishuangbanna, Yunnan Province. The local Dai people regard it as a stone ancestor and believe that women come into contact with it and then reproduced human beings. This is intrinsically related to the worship of male ancestors, which is the ideological basis of patriarchy. 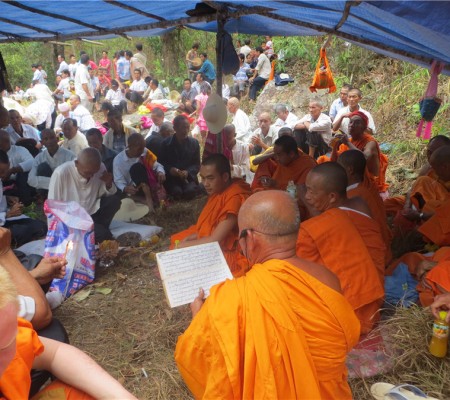 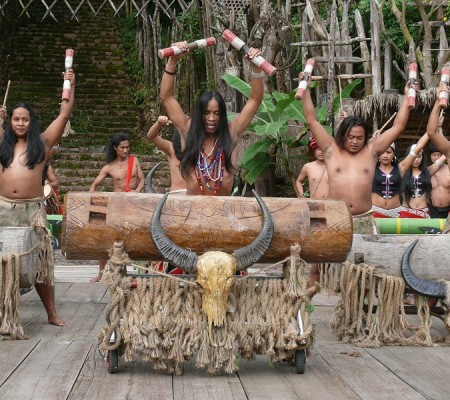 Wooden Drum: A Magical Instrument to Connecting with God for Wa People “Kong Lang… Kong Lang…”, at nightfall, bold drum is played in the area where Wa people live...