Bailuo, a branch of the Yi ethnic minority, is distributed in the southeast of Wenshan prefecture, Yunnan province. Bailuo ethnic people has a long history and culture, they have no their own character, but language. Women over the age of 30 generally do not speak Chinese, so the ehtnic language remains relatively intact. Compared with the Yi minority in other areas, the food, clothing, housing and transportation of Bailuo people are quite different. Well-preserved clothes of primitive simplicity, exotic folk customs and distinct stilt style architecture are of great concern to people from all walks of life in recent years.

The Bailuo ethnic people in Malipo County say their ancestors came from the remote Kunlun mountains. Bailuo people have no written language, so there is no way to prove their migration path. We can only know from the ancient songs they have been singing for generations what a long and difficult journey their ancestors went through to settle in today’s Guangnan County, and then moved to Malipo, Fuzi and other places in groups. Part of the Bailuo people got into Malipo county territory, and stayed to build the village and settle down. They called the place Chengzhai Village. The village is considered to be the oldest Bailuo village in the world. People living in this ancient and mysterious primitive tribe called themselves the Bailuo people. Until the founding of new China, experts and scholars identified them as a branch of the Yi minority.

The Stories of Yunnan(Dian Zhi滇志), which was compiled in the Ming Dynasty (1368-1644), once had some records about the Bailuo people. However, it still remains unknown exactly when the Bailuo people’s ancestors began to move to the southeast of Yunnan. In 2009, Chengzhai Village was listed into the second batch of the intangible cultural heritage list of Yunnan Province. The Bailuo people have their own special ethnic customs. Like the Zhuang and Buyi minorities in Wenshan and Qujing, they make dyed rice (colored rice) during festivals and celebrations. But the color of the rice depends on what festival they celebrate, such as, multi-colored or blue rice for the Spring Festival, while yellow for the “buckwheat festival”. And when there are guests at home, women won’t eat with men on the same table.

The hardworking Bailuo people are mostly skilled craftsmen. Rough, free and easy residential buildings tell us the modesty and tenacity of Bailuo men. The house of Bailuo people is wooden except roof tiles. The upper layer is inhabited by people and the lower layer houses livestock. 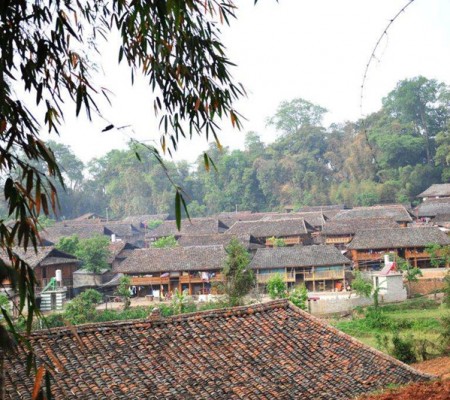