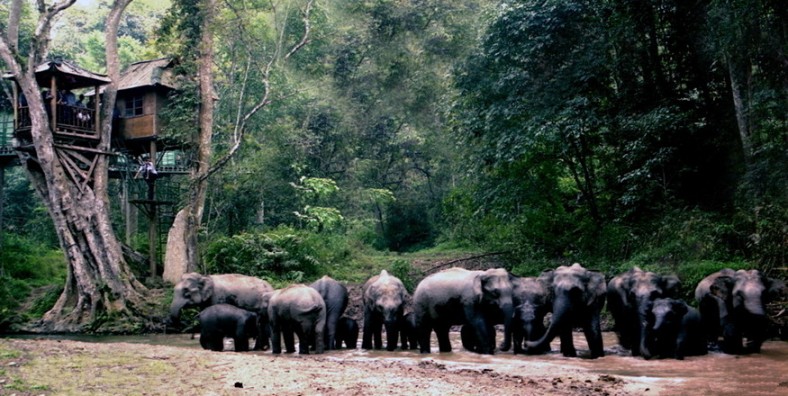 Why is the Wild Elephant Valley so special?

China’s wild elephant can only be found in the tropical forest in Xishuangbanna, while Wild Elephant Valley is the very place where you many find wild Asian Elephants much easier and more frequently. It is recorded that, there are about 130 wild Asian Elephant living in this region.

Where is the Wide Elephant Valley?

How to Get to Wide Elephant Valley? Main Attractions and Things to Do

Outside the main scenic spots of the Wild Elephants Valley, tourists can appreciate wonderful performances given by the first elephant-domesticating school of China, the butterfly world inside the first butterfly-farming park in China, and the tropical birds in the hundred-bird park.The Wild Elepha annts Valley will show you a genuinely beautiful and mysterious Xishuangbanna.

The Elephant-domesticating School is the first of its kind in China. Visitors are able to appreciate performances given by adorable elephants. Well-trained elephants will salute visitors with formal bows, posed in a pyramid, headstand, dance to music, pass the single-log bridge, kick footballs, etc. Visitors can sit on an elephant or take photos with them. The show will going on 11:00-12:00 am, 2:00-3:00 pm every day. Xishuangbanna Wild Elephant & Nature Reserve lies at the crossroads between the eastern and western zones of the Mengyang Tourism Area, at 747–1055 meters above sea level. The reserve is made up of low hills and small hillocks, with wide valley bottoms rich in waterholes that contain enough salt to meet the biological needs of the wild Asian elephant. The wild elephant groups that roam about in the protection zone between Mengla and Mengyu are designated as National Elephants, while those that roam about inside the Mengla protection zone are designated as International Elephants, as the latter often come and go across the China-Laos border.

The Xishuangbanna Wild Elephant & Nature Reserve, with its dense forest and its rich variety of animals and birds, many of which are rarely seen outside a zoo, is one of the few places in the world where wildlife can be viewed in its natural habitat, where it is us humans who are “caged in”, as it were, as we watch the wild animals and birds go about their daily lives with as little interference as possible from us humans, while still allowing us to witness these fantastic creatures in their natural setting. All of which makes Xishuangbanna Wild Elephant & Nature Reserve something of an open-air museum, but an open-air museum with a difference: these creatures cavort about in their natural habitat, not in a man-made, city zoo habitat. ‣ Four sites of interest to the visitor:

● An Asian Elephant Breeding Center, established in Xishuangbanna by the Chinese government’s State Forestry Commission, but still under construction;

● The natural corridor, or ravine, where wild animals roam freely (and where the visitor may observe these animals via a cableway over the ravine), including – besides the wild elephants, of course – the bear and the water buffalo, and where there is a Python Pavilion, a Bird Park that is home to a number of rare birds, and a Butterfly Park;

● And lastly, a Jinuo ethnic minority village with a tent camping facility offering campfire parties, and, for those who require a more tranquil stay, mountain huts for rent.

At the Jinuo village the visitor can observe first-hand the unique lifestyle of this special minority group, and, with a bit of luck, one might observe a Jinuo religious ceremony where ritualistic music is played involving the use of very large – and sacred – sun-drums (the Jinuo are animists, i.e., they believe, as do many other ethnic groups around the world, including American Indians, that all things, inanimate as well as animate, possess a spirit, the sun being especially sacred to the Jinuo etnic minority.

‣ A Survey of the Reserve’s Natural Resources
The planned area of Xishuangbanna Wild Elephant & Nature Reserve is 369 hectares. The reserve is abundant in various natural resources including subtropical forests, tropical rainforests (these are found in the valleys below 800 meters above sea level), half-deciduous rainforests (distributed between 800-900 meters above sea level), and subtropical evergreen broad-leafed forests. And of course, there is the usual range of naturally-occuring wild animals in these various forest habitats. In addition, there are more than 400 types of plants on either side of the ravine that is home to the wild elephant herds, including the banyan, olive, and longan tree.

There are several groups, or families, of wild elephants living in the city zoo habitat, numbering about 60 head in all. They share the ravine with the bear, the wild buffalo, and the cobra, to name some of the more exotic species. It would be unfair not to point out that the reserve is also home to many wild birds which attract the attention not only of international bird experts, but also of groups of visiting bird-watchers.

China has traditionally been a breeding grounds for the Asian elephant (aka Indian elephant), which is somewhat smaller than its African cousin. Because of naturally-occurring as well as man-made changes in the wild elephant’s habitat over time, there are today only about 300 Asian elephants living and multiplying in the free on the virgin forest lands of Xishuangbanna Wild Elephant & Nature Reserve. The Asian elephant represents the largest land mammal native to China.

With its richly varied flora and fauna, its many streams and waterholes, and with the added state protection that the reserve enjoys, Xishuangbanna Wild Elephant & Nature Reserve is truly an ideal habitat for the many wild animals and birds that make their home here. ● The Water-Splashing Festival,  the most important festival for the Dai People to celebrate New Year, is usually celebrated in the middle of April.

● Try to avoid Chinese public holidays, such as Labor Day (May 1st to 3rd) and National Day (October 1st to 7th). It is recommended that you start your day early so as to avoid crowds.

●The wild elephants are more likely to appear at drawn or dusk.
●Elephant shows are given everyday at 11:00-12:00, 14:00 and 15:00. Taking photos with elephants charges at least CNY 10 once.
●It is better to prepare some mosquito products and sun block in case of insects and sunlight.
●Keep a distance with the wild elephants to avoid attack. Sometimes people get attacked by elephants in the area. A tourist was attacked here in 2008. So it is best to watch the elephants in designated places and along with the guides.
●Respect the local customs of Dai and other minorities.