The history of Chinese cold dishes can be traced back to the Zhou Dynasty and the pre-Qin Dynasty period. For every cold dish, it is not only the food itself that you eat, but the seasoning that is the soul. Yunnan people like to eat cold dishes. Hardworking and brave Yunnan people are good at making cold dishes with various wild vegetables. We recommend several Yunnan cold dishes below for your reference.

Cold rice noodles are very popular in Yunnan, especially in Yuxi. It tastes so soft and its golden yellow adds a little touch on the white base. In Yuxi, homemade vinegar is called “tianzi”(甜子) which is not as sour as brown vinegar that we see in restaurants or supermarkets. Locals put some rice noodles and chopped Chinese leek in the bowl, and to add a teaspoon of tianzi, soy sauce, sesame soy and a pinch of salt into the bowl, and then put the wandoufen on top and last but not the least, place some fried chili and chili sauce accordingly. Although it’s a cold dish, it is still popular in winter.

Cut the baked pork (mostly from the hip and rear lag) and pork liver into filaments, and then add onions, garlic, parsley, stewed plum, spicy noodles, soy sauce, etc. As the condiments, put the filaments in the condiments for eating. This is known among the people as “eating raw hide”.

Jidou bean jelly is the signature food in Lijiang Ancient Town. Jidou, namely, chickpea, is a unique type of legume in Lijiang. Chickpea is a kind of soybean and it is just like the eyes of the chicken in shape. Chickpea is main ingredient of chickpeas Bean Jelly. Soak the chickpea, grind the socked beans into soybean milk, boil it the milk until it turns gray-white and pour it into different-shape containers for modeling, then Chickpeas Bean Jelly is made. The chickpeas bean jelly is so luring in appearance and palatable in taste.

Duosheng is a traditional dish made by mixing minced raw meat with condiments like salt and hot pepper. Ingredients are chicken, pork, fish and other wild animal meat. These meats is firstly cut into very small pieces, and then mixed with wild fragrant plants and pepper.

Named as  the “kingdom of plants”, Xishuangbanna is a gourmet paradise for many visitors who will find smashed papaya which is a representative of the assorted Dai ethnic snacks. Prolific papaya trees are one of the enticing sights in most Dai ethnic villages. Locals like to mix papaya filaments and spices such as fresh pepper, tomato, garlic, lemon, salt, sugar and fish gravy, etc, and pestle them in a mortar to make smashed papaya. Tasting sour, sweet, spicy, salty and a little fishy, smashed papaya is available in most parts of  Xishuangbanna. Smashed Chicken Claw is also popular in Xishuangbanna.

Zheergen is the edible rhizome of Houttuynia cordata with a fresh, spicy, peppery flavour that is used in southwestern Chinese cuisine. Raw consumption as part of cold-tossed salads, when it is most frequently combined with coriander, vinegar, fresh chilli, and soy sauce.

Mint is a staple in Yunnan province, where flavors often take on a Southeast Asian inspiration. Perhaps the best mint dish is this simple cold mint salad, which combines fresh mint leaves, soy sauce, vinegar, sesame oil, spicy fresh hot peppers, into a refreshing mix that is the perfect appetizer, invigorating your taste buds with a combination that is at once minty, salty, spicy and acidic. 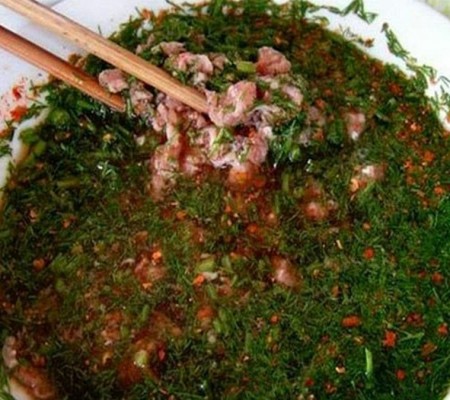