Yunnan is foremost among the Chinese provinces in its variety of animals, with some 250 species of mammals, 360 of fish, 140 of reptiles, 90 of amphibians, and 780 of birds. In the tropical forests of the south, mammals—including monkeys, bears, elephants, and porcupines—are found in large numbers. Some of them, such as the black snub-nosed monkey(Rhinopithecus bieti) and the Hoolock gibbon(Hylobates hoolock), are now under state protection. A wide variety of domesticated animals are kept in both the western canyon region and the eastern plateau region.

The richest province for birds in China with over 770 species recorded including nearly 40 of the Chinese endemics and many species with ranges restricted to Yunnan, northern Myanmar and northeastern India, the latter of which shares a very similar avifauna.

Best Times for Birds and other wildlife in Yunnan

The best time for birds in Yunnan is during the northern winter, especially December-January, when migrant species from further north are present, and late April-early May for many forest species. Because of the wide range of altitudes weather conditions during the winter are very variable, from cold and damp, including snow, to hot and sunny. High up, gloves and warm clothes are essential. Also during this time it is best not to travel during the Chinese New Year holidays which usually last two weeks at the end of January and/or beginning of February. The best time for the widest variety of flowering plants is late May through June.

The black snub-nosed monkey (also known as the Yunnan snub-nosed monkey) is a medium-sized primate species named for its black fur and a distinctive upturned nose, which results from a lack of nasal bones. Adult females weigh in at roughly 20 pounds (9 kilograms) and adult males at 30 pounds (14 kilograms).

The monkey lives almost exclusively in the Yunling mountain region of Southwestern China. The black snub-nosed monkey lives at higher altitudes than any other primate species (aside from humans), inhabiting coniferous forest roughly 10,000 feet (3,000 meters) to 15,000 feet (4,700 meters) above sea level. In the winter, the monkey moves to highest part of its range despite increasingly cold temperatures. This is because lichen is more abundant at these heights.

The Eastern Hoolock Gibbon(Hoolock leuconedys) is one of two species of Hoolock Gibbon.  This species is found particularly east of the Chindwin River in Myanmar and in southwest Yunnan (China). Hoolocks are the second largest of the gibbons, after the siamang. They reach a size of 60 to 90 centimeters and weigh 6 to 9 kilograms. The sexes are about the same size, but they differ considerably in coloration: males are black or blackish in color, with a white strip above their eyes. Females are lighter, ranging from pale and buff to a gray-brown fur, which is darker at the chest and neck. Both have black faces. White rings around the eyes and around the mouth of females give their face a mask-like appearance.

Phayre’s leaf monkeys, also known as Phayre’s langur, are an endangered species under China’s first-class protection, which mainly inhabit in Yunnan and neighboring Myanmar. The Phayre’s leaf monkey is a species of lutung mainly living in primordial broad-leaved forest below an altitude of 2700 meters, these creatures love foraging and playing on the top of woods. They usually live in groups – 60 to 80 at most.

The beautiful Black Giant Squirrel is one of the largest squirrels in the world. It inhabits tall primary forest and generally remains high in the canopy, but at times may be found at lower levels when feeding. It is largely  solitary in habits and extremely shy, rarely coming to ground. It can confidently make huge leaps from branch to branch in the high canopy. Its upperparts and tail are jet black, but the cheeks, chest, front of the forelimbs and underparts are  cream or orange. The tail is long and dorso-ventrally flattened. It is found in forests from northern Bangladesh, Northern India, Eastern Nepal, Bhutan, Southern China, Myanmar, Laos, Thailand, Malaysia, Cambodia, Vietnam and western Indonesia.

Flying squirrels are a tribe of 50 species of squirrels in the family Sciuridae. They are not capable of flight in the same way as birds or bats but are able to glide from one tree to another with the aid of a patagium, a furry, parachute-like membrane that stretches from wrist to ankle. Their long tail provides stability in flight. Anatomically they are very similar to other squirrels but have a number of adaptations to suit their life style; their limb bones are longer and their hand, foot bones and distal vertebrae are shorter. Flying squirrels are able to steer and exert control over their glide path with their limbs and tail.

Wild elephants are very few now, and in some southeastern Asian countries, there are many domestic elephants and serving elephants. The wild elephants of China are only distributed in the southern Yunnan Province, on the border areas with Myanmar and Laos. The number of wild elephants is very rare, and they are often hunted and killed, and the damage is very serious. Wild elephants belong to the national first class protected animals.

Slow Loris inhabits in tropical rain forests and subtropical monsoon rain forests. They live entirely in trees and rarely go to the ground. They move very slowly but accelerate when attacked, so also known as the “loris monkey”. Distributed in Yunnan and southern Guangxi, and slow loris is mostly distributed in southeast Asia. It is national first class protected animal.

Due to varied terrain and enough sunshine & rainfall, Yunnan boasts half of China’s plants and animal species. Since the weather in most areas of Yunnan is mild in winter, thousands of various birds migrate to Yunnan, Mainly from Sibiria during the winter. Of course, apart from Winter, You can pay a visit to Yunnan to watch the birds and take nice pictures in other seasons. Birding tours are usually around lakes or on the mountains, and birding tours at Gaoligongshan are most famous and popular in Yunnan. Six Tips for Birding by Ear

Yunnan box turtle (Cuora yunnanensis) is a species of turtles in the family Geoemydidae (formerly Bataguridae). It is believed to be endemic to Yunnan, China (in Kunming and Huize) and was suspected to be extinct since the early 20th century; the last verified specimen was collected in...

Yunnan lar gibbon (Hylobates lar yunnanensis), also known as the Yunnan white-handed gibbon, is a subspecies of the lar gibbon, a primate in the gibbon family, Hylobatidae. This Chinese subspecies is thought to be extinct. Taxonomy This animal from Yunnan is listed as... 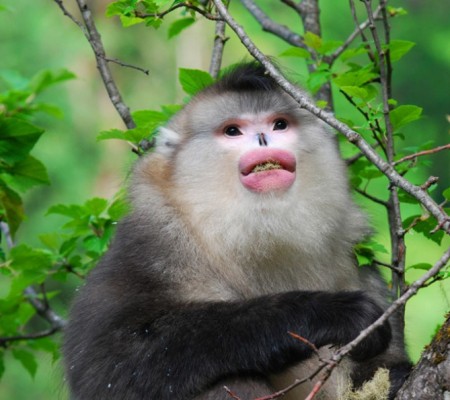 The Black snub-nosed monkey (Rhinopithecus bieti), also known as the Yunnan snub-nosed monkey, is a large black and white primate that lives only in the southern Chinese province of Yunnan,where it is known...