As one of the important destinations in the classical Yunnan Travel and a multi-ethnic place, Lijiang is the base camp of 22 ethnic minorities. In addition to the Han people, Naxi and  Yi minorities are the main ethnic groups in Lijiang. Lijiang Ethnic Culture is very colorful. When you come to the mysterious Lijiang, it is easy to find Naxi architecture everywhere and listen to the Naxi language said by Naxi people and feel the Dongba culture. Each ethnic minority there has its own unique customs, traditions and architectural styles, making Lijiang picturesque place. You will have the chance to experience the life of Naxi people, learn about their lifestyle, religion and cuisine. The unique scenery, coupled with fascinating Lijiang Ethnic Culture makes it attractive and charming. Come to Lijiang and take a Lijiang Cultural Tour.

The famous ancient Lijiang City has a history of 800 or 900 years. As early as the South Song Dynasty (1127—1279AD), the city had already begun to take shape. From the Ming Dynasty (1368-1644), Lijiang was called “Dayan County”, literally meaning ‘ink stone’, because the city is situated in the middle of the Ljiang Dam and surrounded by green mountains and a river running through the forest, evoking a green ink stone, from which Lijiang itself was then named. Since the Qing Dynasty (1644-1911), it has been the distribution center and a confluence for trade along the old tea-horse road. In 1997 Lijiang was listed as one of the UNESCO Heritage Sites.

More about History of Lijiang

Since ancient times, because of its unique ethnic origin and geographical location, the religious culture is very prosperous. It not only has its own original religious Dongba religion, but Taoism, Chinese Buddhism, Tibetan Buddhism and Western Catholicism and Christianism are also continuously transmitted to Lijiang. In the mutual opposition and exclusion, merger and absorption, Lijiang eventually becomes a place with multi-religion. By the early 1950s, there were more than 60 churches and temples in Lijiang, which was less than 400 square kilometers, including five famous Buddhist monasteries of Tibetan Buddhism. What's more, the Catholic churches and Christian churches began to take shape. This multi-religion mixture has made the religions popular in the Lijiang area and presents a rich and varied form, which has a multi-level and multi-angle influence on the culture and folk customs of the various ethnic groups in Lijiang.

Throughout the ages, the temples have carried people's beautiful sustenance to life, attract countless believers to come to worship. The temples in Lijiang can be described as numerous. There is always one that will make you stay and feel the beautiful sceneries of Lijiang.

The Lijang Ancient Town is also famous for its architecture, which is an important representative of Lijiang Architecture.  Just take a walk through the local streets, you will find many things catch your eyes. Every house has its own unique characteristic that stands out. Most of the buildings are made of woods. And most of them consist of a living area and a yard.  The architecture in Lijiang is influenced by Han, Naxi,  Yi, Bai and other minority groups in China. The most common style has three rooms and one wall, and four units and 5 yards. Standing inside the yard, you face the main room and your back will be facing a wall. After you enter the main room, you will find one smaller room on each side. The main room is used for guests. And the two smaller rooms on each side are bedrooms. These kind of designs are efficient for people the day to day living in Lijiang.

Lijiang Dining is as beautiful as the sceneries here. Especially, the dishes historically cooked by the Naxi people, the main ethnic group in Lijiang, should not be missed when you come to Lijiang. To some extent, Lijiang is a melting-pot for many different cultures. Therefore, when you come to Lijiang, you can eat the food from around Yunnan Province and other Chinese dishes. Whether in the small stalls, or in a small restaurant with a strong Naxi style, you can taste a lots of different and delicious food in Lijiang. Lijiang delicacies are characterized by refreshing tasting dishes and mellow soups.

One of the best known aspects of Mosuo culture is its practice of "walking marriage" (走婚 ), although this practice remains poorly understood. Walking marriages are the most prominent form of marriage in Mosuo culture; however, it is not unheard of for women in Mosuo culture to marry outside of their culture, therefore participating in marriages other than walking marriages. In a walking marriage, both partners live under the roof of their extended family during the day; however, at night it is common for the man to visit and stay at the women's house (if given permission) until sunrise. Therefore, they do not technically live in the same household, but they are free to visit when granted permission. Children of parents in a walking marriage are not raised by their father. The brothers of the mother (maternal uncles) in the marriage take on the responsibilities of the father since the father isn’t typically around during the daytime. Due to the separation of the father and mother, it is crucial for the uncle(s) to play a large role in the development of the child.

The Naxi Ancient Music is a living musical fossil of human civilization; it contains sacred cultural heritage of Chinese history and has great importance in Chinese cultural development as well as the world music industry. The Naxi people live in the area of “three parallel rivers” northwest of the Yunnan province. They enjoy the lifestyle of being very close to the nature and wild lives, and they are born talent dancers and singers. Thanks to the unique geographic and natural environment of Lijiang City, the diversified culture groups have been living in harmony.The Naxi music reflects the rich cultural diversity; it is deeply rooted and widespread in the social, economic and daily lives among Naxi people. Naxi music would be performed in various forms like wedding songs, banquet performance, entertaining musicals, funeral dirges and so on.

Dongba painting is one of the important contents of Naxi culture and art. It is spread in Lijiang Ancient Town and Yulong Naxi Autonomous County, and also distributed in Shangri-la of Diqing Tibetan Autonomous Prefecture. Dongba paintings are mainly made of wood chips, Dongba paper, linen, etc. The Dongba paintings come in a variety of forms, such as scrolls, woodblock paintings, playing cards, scroll paintings and so on.

As a multi-ethnic place, Lijiang is the base camp of 22 ethnic minorities. In addition to the Han people, Bai, Yi, Lisu, Naxi, Dai, Mosuo, Pumi are the main ethnic groups in Lijiang. When you come to the mysterious Lijiang, it is easy to find Naxi architecture everywhere and listen to the Naxi language said by Naxi people and feel the Dongba culture. What’s more, tourists can not only enjoy beautiful landscape in Lugu Lake but also explore mysterious matriarchal system of Mosuo people.

More about Ethnic Towns in Lijiang

There are 22 ethnic groups in Lijiang City, including,  Bai, Yi, Lisu, Naxi, Tibetan, Dai and other ethnic groups. As the prominent ethnic minority inhabited in Lijiang City, Naxi Ethnic Minority created brilliant culture and customs, among which the unique traditional festivals of Naxi people enjoy good fame and attract tourists home and abroad to visit.

With a large number of ethnic minorities, Lijiang has many intangible cultural heritages with ethnic characteristics, such as Remeicuo Song and Dance of Dadong Naxi Ethnic Minority in Lijiang, Mosuo Museum for Intangible Cultural Heritage in Yongning Town, Lijiang. Every intangible cultural heritage has its inheritors, who play a vital role in the promotion and inheritance of culture.

Xu Yunkui(徐云奎), born in 1956,the most famous provincial strong colour woodblock printer ,one of the most important memeber of the National Art and Culture Asiociation,the principal of Baisha Naxi... 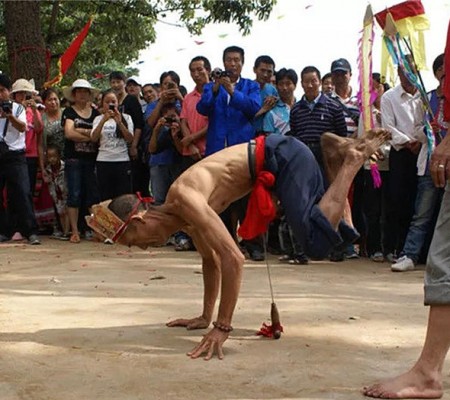 Profile:  He Guowei (和国伟) was born in 1951, and he is Naxi ethnic minority, a member of Laoding village Daju Township, Lijiang City.(丽江大具乡劳丁村人). Personal Experiences He was a ninth-generation ancestor...