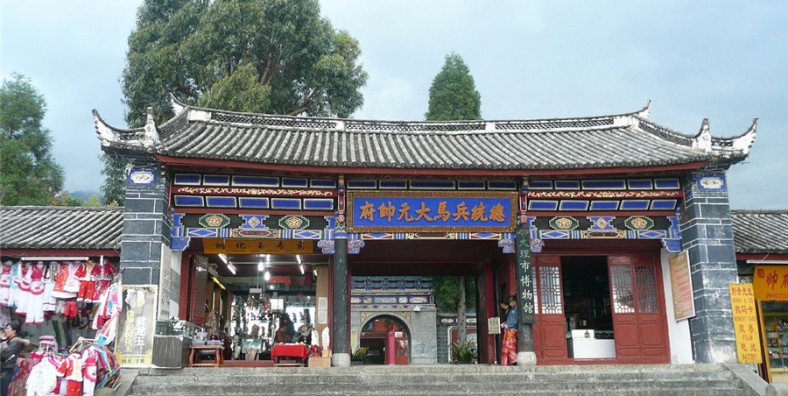 Why is Dali City Museum so special?

The mansion was listed as a culture relic under provincial protection in 1993. Due to the significance of Du Wenxiu’s uprising and his resistance to the control by Qing Dynasty, the mansion was appointed as the Patriotism Education Base in 1998 by the Yunnan Provincial Party Committee and the People’s Government of Yunnan Province.

How to get to Dali City Museum?

Take No.8 bus in Xiaguan Railway Station and get off in FuxinG Road Station, then walk 1000 meters south along Fuxing Road.

Take No.4 bus in Meideng Bridge of Xiaguan and get off in Honglongjing Station, then walk along the Bar Street.

Once named the Marshal Mansion, the Museum was originally home to Du Wenxiu(杜文秀) (1828-1872). Du is well known for leading the Hui ethnic minority revolt against the Qing Dynasty (1644-1911) in 1856. Once Du conquered Dali, he was elected Marshal of the military forces and the original mansion of Yunnan Province was re-named the Marshal Mansion. The battle lasted 18 years. The mansion was destroyed soon after Du’s defeat in 1872. It was not until 1884 that the mansion was restored.

Extensive renovations returned the mansion to its original glory, the mansion finally opened to the public as a museum in 1987. The 360 meters (1181 feet) high wall once surrounding the mansion can now only be found in the southern section of the estate. The museum consists of a front hall, a back hall, Meridian Gates inside the mansion and two floral halls in the southern and northern parts. The mansion also boasts many functional rooms: military-political-affair setup, living rooms, studies, and storerooms.

The Flora Hall (located in the southern paThe costumes of ethnic groupsrt of the museum) has more than 120 pieces of stone steles carved in different dynasties ranging from Song Dynasty (960-1279) to Qing Dynasty on display. It is reputed as the most influential forest of steles in Yunnan Province. These exhibits provide valuable materials and historical data tracking the development of the local culture in the past dynasties. The Flora Hall (located in the northern part of the museum) showcases stoneware, crockery, bronze implements, porcelains, and jade articles that were excavated in and around Dali. On display throughout the museum are also wood carvings, stone carvings, jade carvings, calligraphies and paintings. The wood caving ‘Manjusri Bodhisattva Riding on a Lion’ has received recognition worldwide while exhibiting in Japan and Switzerland during the 1990s.

Dali has a long history and is known as the “City of Letter”, enjoying many rich cultural heritages. The Beiqiu Site of Yinsuo Island in Dali Haidong is the earliest Neolithic site in Yunnan, dating back more than 5,000 years. In 1253, Yuan Shizu Kublai led troops to destroy the Dali Kingdom and established the Yunnan Province. At the beginning of the Ming Dynasty, the bureaucrats at all levels of Dali were sent from other places, and the productivity was further improved. Dali’s porcelain handicraft industry began to develop. In Qing Dynasty, the Admiral House was set up in Dali, making Dali once again the political, cultural and economic center in Yunnan. The historical exhibition hall displays the remains of these historical developments. Dali is known as the Kingdom of Buddhism. In 1978, when the main towers of Chongsheng Temple were repaired, thousands of precious religious relics of the Nanzhao and Dali Kingdom were found. The metal statues of the Dali period were called “Dali Buddha.” The Buddhist Art Exhibition Hall displays Buddhist art statues from different periods unearthed and collected in Dali.

1.Best Time to Visit Dali City Museum
A lot of festivals and events of Bai nationality focused on March to April each year, travel at this time you will feel rich ethnic customs. And there is a song: “March in Dali has good scenery”, so in the spring, it is suitable whether it is traveling to Dali, or climbing Canshang Mountain, visiting Erhai Lake.

2. What to Pack
Dali belongs to the low altitude plateau monsoon climate and ultraviolet ray is strong. Travelers should bring usual clothes and necessities as well as sunscreen cream and sunglasses to protect yourselves.