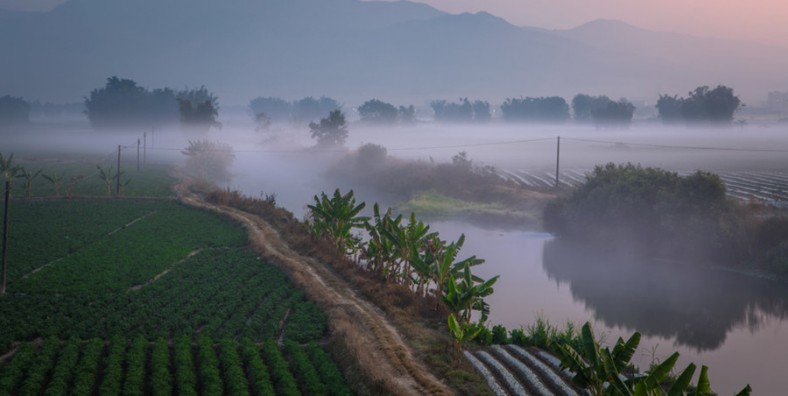 Beautiful Dayingjiang River runs through Yingjiang County in west Yunnan border area. The river mouth is open and its surface is as flat as a mirror. In the sunny days, the limpid river lies as smooth as silk. Along the both sides of the river, distant mountain loom and forest is dyed black. Umbrella-like banyan groves looks lush and green. In the converging place of clouds and water, a bamboo raft is moving away… In the distance, since the river is set off by bamboo forest, a unique scene appears that the river overflows the bamboo groves and bamboo groves place the river in between. The hundred-meter-wide river is tightly locked by two pieces of rock cliff at Tiger-jumping Gorge. The distance between the two cliffs is only seven meters. The pouring torrent clashes the high mountains which rise abruptly along the gorge. The increasingly large fall of river generates glittering foam and the thundering uproar in the gorge can be heard several kilometers away. Considering the pouring torrent, deep riverway and giant stone emerging in the middle of the river, small waterfalls can be seen everywhere. The mountains stand facing each other on both sides of the river, posing a natural wonder of “a seam of sky if people look up and a thread of river when having a bird view.”