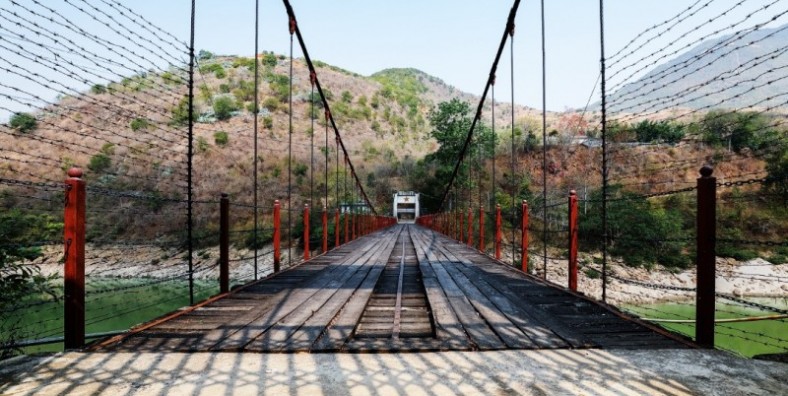 This “Burma Road” bridge (Sometimes spelled as Hwei Tung), with a span of 123 metres, has been preserved as a monument because it was here that the Japanese army was stopped during World war-II. The invaders coming up the Burma road from the South were unable to cross the Nujiang river (Salween) after the bridge was blown up on the 5th of May 1942 by the Chinese defence.

The bridge was reconstructed to handle the supplies coming up the Ledo road after the Chinese recaptured Songshan mountian and the far Western part of Yunnan again at the end of 1944. The present form dates from 1950 and carries the communist star on the rebuild Eastern bridgehead.

The Huitong Bridge seen from the West bank in 1944. The blown Eastern bridgehead is still missing and there are no overhead cables thus the bridge can only handle limited traffic. (©2)

The Huitong Bridge seen from the East bank in 1945. The Eastern bridgehead has been improvised and the bridge can handle fully loaded trucks again. Note the fuel pipeline hanging under the bridge. (©2) The overgrown eastern bridgehead of the Huitong Bridge was once one of the busiest spots on the Burma Road.

The Huitong Bridge seen from the eastern bridgehead.

Much has changed since World war-II. What ones was a vital and impressing 123 metre crossing 15 metres above the water now looks like a toy. In 1977 a whole new bridge was build just downstream that now dominates the view.

Huitong Bridge was originally a chain bridge built in the late Qing Dynasty(1644—1911) and was abandoned in 1900. In 1932, Liang Jinshan, president of the Myanmar Overseas Chinese Association, contributed 200,000 silver dollars to rebuild it. In 1935, the Huitong Bridge once again reopened to traffic.

In 1937, imperial Japan began a war of aggression against China. At that time, Japanese troops cut off the majority of land and sea channels between China and the international community, including the Yunnan-Vietnam Railway, which was blocked with the fall of Vietnam. In order to restore a supply lifeline for the Chinese People’s War of Resistance against Japanese Agression, 200,000 compatriots from different ethnic groups in western Yunnan began to construct the Yunnan-Myanmar Road.. In 1938, Huitong Bridge was transformed into a highway bridge that was strong enough to support a ten-ton truck.

In their attempts to destroy Huitong Bridge, Japanese forces launched six air strikes from October 28, 1940 to February 27, 1941. More than 4,000 bombs were dropped over the course of 168 sorties. Huitong Bridge was damaged to varying extents after each bombing, but it stand steadily over the Nujiang River. On May 3, 1942, Japanese troops invaded China from Wanding. They advanced over 200 kilometres in two days and captured Longling City on May 4. One day later, 500 Japanese troops disguised as refugees tried to seize Huitong Bridge by surprise. In the afternoon, a quarrel was started on the bridge, and a Chinese soldier fired a warning shot. The Japanese troops thought they had been exposed and immediately launched an attack. At a critical moment, the defending soldiers detonated the explosives that had been laid there in advance.

With the destruction of Huitong Bridge, the Chinese People’s War of Resistance against Japanese Aggression also changed its course. The rapidly advancing Japanese army was kept at bay on the west bank of the Nujiang River. In the two years that followed, Japanese forces never crossed the Nujiang River. In May 1944, the Chinese Expeditionary Force surged across the Nujiang River and began the Western Yunnan counterattack. In August 1944, Huitong Bridge was reopened to traffic, and a large number of military supplies were transported to Western Yunnan counterattack battlefields. The restoration of the Huitong Bridge sounded the death knell for the Japanese invaders.

Today, Huitong Bridge has become a cultural relic, but still majestically and solemnly bears witness to the rapid changes on both sides of the Nujiang River.