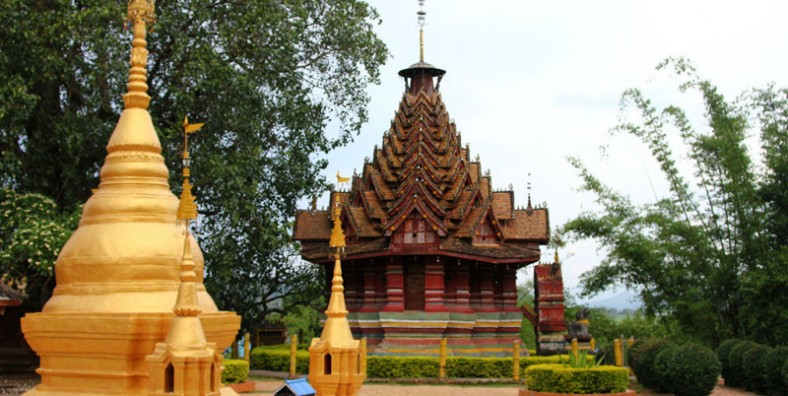 Jingzhen Octagonal Pavilion (Chinese name: 景真八角亭), an famous ancient Buddhism architecture in China, is one of the most important cultural relics in Xishuangbanna. Located in the Jingzhen Village, this pavilion is called Octagonal Pavilion which means a place to hold the holy religious ceremony.

As one of the important relics of Xishuangbanna, the Jingzhen Octagonal Pavilion is named after the place where it is located. The octagonal pavilion, called “Wo Su” in the Dai language, is a place where the senior Buddhist monks giving sutra, repenting, holding meetings and memorizing Buddha. In the village of Jingzhen, about 14 km northwest of Menghai, is the Octagonal Pavilion, first built in 1701 as a place of Buddhist worship. The original structure was severely damaged during the Cultural Revolution but renovated in 1978 and the ornate decoration is still impressive. The temple also operates as a monastic school. The paintings on the wall of the temple depict scenes from the Jatatka, the life history of Buddha.

Where is Jingzhen Octagonal Pavilion?

The Octagonal Pavilion at Jinzheng locates on the hill of Jingzhen village, Mengzhe area, Menghai County of Yunnan Province,  about 14km away from Mang Hai County.

How to Get to Jingzhen Octagonal Pavillion?

Take a bus at Jionghong Bus Station to Menghai County, and then take a bus to Mengzhe Town which will pass by Octagonal Pavilion. CNY 10 for the ticket

According to the historical materials, this pavilion was constructed in 1701. In Ch’ing Dynasty, some Buddhists of “Han” the majority tribe, from inland China and Buddhists of Dai from the area want to commemorate the founder of Buddhism named Sakyamuni, therefore they designed the building according to his gold cap.

The pavilion was built with bricks, four doors, eight-sides and many angles. Decorated by brilliant craftsmanship, it covered with colorful flowers pattern and numerous lively birds made of clay fill the ridges through out the building. The building top is all wood, and the structure appears cone shape with many layers of eaves. The roof laded with tile looks as the fish scales and is similar with the look of the Sakyamuni Buddha’s hair. Jingzhen Octagonal Pavilion is a Buddhism pavilion built on the top of mountain. With brick materials, it is in a height of 21meters, 31 sides, 32 corners. On the wall, there are 31 carving pictures which are all about elephants, lions, tigers, etc. And the mirrors and colored glassed are inlayed outside the layout of the pavilion. The room of the pavilion is 6.4-meter-width and 2.5-mete-height. There are 24 sides wall that decorated with golden patterns. The top of the pavilion is wooden material. Each pavilion angle has an elaborate carvings such as golden chicken, phoenix, etc. The Octagonal Pavilion is the typical Buddhism architecture in Xishuangbanna, absorbing the southeastern Asian style as well as the traditional Chinese ancient architectural factors.

Other Information of Jingzhen Octagonal Pavilion

● Symbol of culture exchange between Dai and Han

On it umbrella shape top covered with thin metal slices, each come with small hole, when light breeze blows it will release gentle sound. The architecture is magnificent and structure is beautiful, the construction art of the building truly represents goodie of Buddhism among Dai. This building also is the symbolic of culture exchange between Dai and Han. The most interesting is that the location of pavilion, were in the same place of the Dai folktale “Calabash Letter”. The bridge over Liusha River from Menghai to Lancang the former address of Jinzheng bamboo bridge in “Calabash Letter”. The story spread the moving love story between the prince of Nanman (another minority tribe) and a princess named Nanmuhan. This story created many more stories in the area.

Allegedly in Ch’ing Dynasty, this octagon pavilion was used as meeting chamber. On 15th and 30th of each month in Dai calendar, the faithful Buddhist of Jinzheng area gather here, listening to the high monk preach and have discussions about religion event. It is also the place that the many locals discussed their important issues. It is a place to promoted monk to a higher position. Today, it is the tourist spot for many Buddhists when they travel to Menghai area.

The Water-Splashing Festival, New Years Day by Dai calendar, will be celebrated in the Jinghong City Proper between April 12 and 18. The grandest festival of the Dai is usually held along with activities such as dragon-boat racing, sending off skyrockets, and throwing love pouches. It is believed that everyone being splashed at will have good luck.

Do not miss out the Dai annual Water-splashing Festival if you are there. Many minority tribes of Yunnan will emerge here and their mass celebrations, entertainment from different tribes will be exhibit at this annual event. Can visit all around the year. Belonging to tropical rainforest climate, Xishuangbanna’s dry season is from November to April the next year and rainy season is from May to October. With annual average temperature of 21c, it has long summer and no winter. With cool and pleasant four seasons, the best time for traveling Xishuangbanna is from October to June the next year.