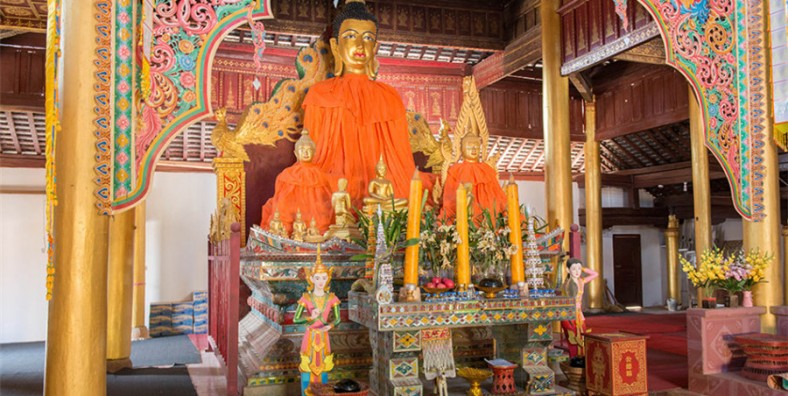 Shangcheng Buddhist Temple, also known as Jinger (Dai language, meaning Longcheng Buddhist Temple), is located in Menglian Town, Menglian County, Yunnan Province. Located on Jinshan Mountain, close to the Dragon Blood Tree Community, Shangcheng Buddhist Temple is an important part of the Nayun Ancient City. According to legend, there is a stone cave in the temple connected with the Dragon Pool of the Nanlei River(南垒河). Because the dragons in Dragon Pool often follow the passage to the Buddhist temple, to sermon and accept the incense baptism, also named “Long Mian Temple.” The Buddhist temple has a high reputation and it is a special Buddhist temple of the Chieftain’s family in the Ancient time. People usually visited here with domestic and foreign monks who came to Menglian. Today, it has become a place for Buddhism believers to engage in Buddhist temple activities. It is the center of communication for Dai culture, art, and folk customs. It is also an important collection and exhibition hall for the cultural classics, folk art and architectural style of the Dai people.

What to see in Shangcheng Temple

The Shangcheng Buddhist Temple was built in 1868 and covers an area of ​​more than 5,000 square meters. It consists of a Buddhist temple, a mortuary, a gate, a gallery, a pavilion, a golden pagoda, and a silver tower. The main building is a three-story vestibule-style civil structure. A total of 56 cylinders are arranged in 8 rows of symmetry. Each column, raft, beam and raft has a variety of flowers, animals and figures printed with gold powder. The roof is a small tiling tile. On the Buddhist temple, there is a statue of Sakyamuni. There are various kinds of chantings dedicated to the worship of the believers. The myths and legends of the Dai people are recorded on the plaque. The patterns of life are painted, and folk paper-cuts, brocades, paintings, etc. The art form, vividly expresses the history, architecture, production, life, religion, and faith of the Dai people.

How to get to Shangcheng Temple

Take the taxi or rent a car to go to the Shangcheng Temple, which is near the Nayun Ancient Town.

Show respect: Turn off mobile phones, remove headphones, lower your voice, avoid inappropriate conversation, remove hats, and no smoking or chewing gum. You are likely entering an actual consecrated area, where locals go to commune with the sacred; any hint of irreverence might cause deep offense.

Remove your hat and shoes: Shoes should always be removed and left outside of the main worship area. The pile of shoes is an obvious indication of where to leave them.

Cover yourself: This is the rule most ignored by tourists who dress for the heat in countries around Southeast Asia. Shoulders should be covered and long pants should be worn rather than shorts. Some temples in tourist places may be more lenient, but your modesty will be appreciated.

Respect the Buddha Statues: Never touch, sit near, or climb on a Buddha statue or the raised platform. Get permission before taking photographs and never do so during worship. When exiting, back away from the Buddha before turning your back.

(Disrespect for the Buddha, after all, can have legal repercussions in these parts, as some tourists have discovered the hard way.)

Don’t point: Pointing at things or people around the temple is considered extremely rude. To indicate something, use your right hand with the palm facing upwards. When sitting, never point your feet at a person or image of Buddha.

Stand up: If you happen to be sitting in the worship area when monks or nuns enter, stand to show respect; wait until they have finished their prostrations before sitting again.