The Moon-shaped Bend of Jinsha River in Deqin County, Diqing 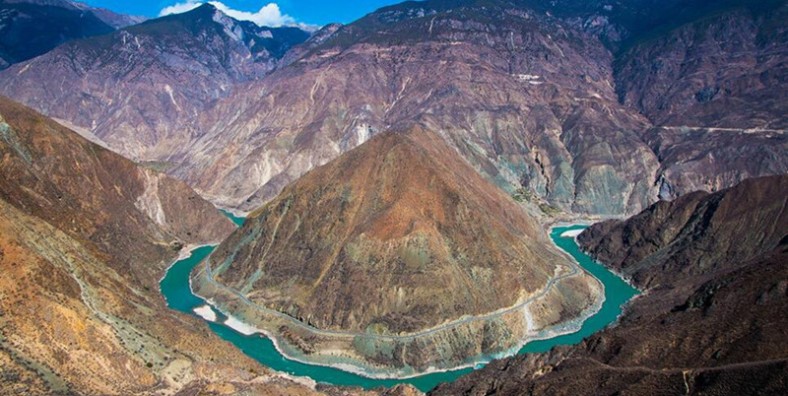 Why is Moon-shaped Bend of Jinsha River So Special?

Also called the Great Bend of Jinsha River, it is one of the top 40 landscapes in China. Jinsha River, the upper reach of the Yangtze River, is blocked by mountains on its way southward, running around the pyramid-like Rizhui peak and forming a beautiful U turn as a natural wonder. A panoramic view from the observation platform on the hill makes one feel relaxed and happy.

Where is Moon-shaped Bend of Jinsha River – Location

The bend is 15 km north of Benzilan Township of Deqin County, between Deqin County in Yunnan and Derong County in Ganzi Tibetan autonomous prefecture, Sichuan.

At the Shangri-la Passenger Station there is a scheduled bus running to Benzilan Town. While rent a car getting there is the best way. Yunnan Exploration can provide car-rental service for you with the best skilled driver and good vehicle.

The view platform for the Moon-shaped Bend of Jinsha River is the best position to see the whole bend. There are some free view poingt along the roadside while you can only see half of the bend. Spring and Autumn are the best seasons to visit the bend for the clear water. Summer is the rainy season of Yunnan province and the color of the river is yellow which is not recommended.

Dongzhulin Monastery
Built in 1667 and located in Benzilan Town of Deqin, Dongzhulin Monastery is the largest one of the three Gelu Sect monasteries in Deqin County and one of the religious cultural activity centers in Kangnan District. With orderly-distributing architecture complex, the lofty monastery can be mistakenly deemed a town when looked from the distance.

Baima Snow Mountain
Baima Snow Mountain National Nature Reserve is located at the south-eastern part of Deqin County of Diqing Tibetan autonomous prefecture, northwest of Yunnan province. It’s high in the north and low in the south, in the transitional zone between Qinghai-Tibet plateau and Yunnan-Guizhou plateau. It is the largest national nature reserve for protecting Yunnan golden monkey in China. The main objects of protection are alpine coniferous forest, mountain vertical vegetation landscape and Yunnan golden monkey.

Feilaisi Monastery
Feilai temple, the best place to watch goden peaks of Meili mountain at sunrise. So if u plan to watch sunrise, it’s absolutely a good idea to live at Feilai temple the night before. But actually it is unusual to see the goden peaks. The peaks of the mountains are often surrounded with clouds due to the high altitude they are. And this makes more interestings for Meili. There’s a kind of saying that, if any Japanese appears in this area then people can’t see the golden peaks that day. This is because Japanese are not welcomed by Tibetan people. Yes, they hate Japan and Japanese, just like people in notheast of China.

5 thoughts on “The Moon-shaped Bend of Jinsha River in Deqin County, Diqing”