The Upper Section of Tiger Leaping Gorge (Lijiang Side) 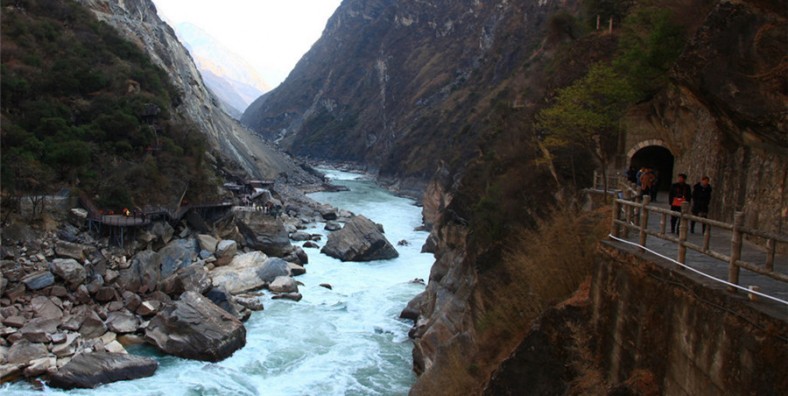 About the Upper Section of Tiger Leaping Gorge (Lijiang Side)

The Upper Section of Tiger Leaping Gorge (Lijiang Side)(上虎跳峡丽江段) is well-developed with nearly 3.5 km of walkway and a prefered spot for most visitors. In fact, there are two tourist areas of the Upper Tiger Leaping Gorge. One is in Shangri-La, and the other is in Lijiang. More exactly, it’s a scenery spot divided by Jinsha River(Gold Sand). It’s better for travellers who are going to head for Shangri-La to hike along the upper section in Shangri-La for saving some time. For visitors ready to back to Lijiang, hiking along the walkway in the Upper Section of Tiger Leaping Gorge in Lijiang would be a better choice because there is a available way leading to the observation deck for viewing the Tiger Leaping Stone and surging riptide in Jinsha River. Throughout the trail, the grand view of Jade Dragon Snow Mountain and the Jinsha River are available for travellers. You will see the Jinsha River shrinks in a most narrow valley, and blocked by several huge stones in random. Listen to the deafening voice of water flapping at the stones. The shuttle walking time is about two hours. Travellers can take a rickshaw from tourist area with the fee for 60RMB if bored with the same route when backing to the start point.

Where is the Upper Section of Tiger Leaping Gorge (Lijiang Side)

Located about 9 km (5.750 miles) away from the Qiaotou Village, the Upper Section of Tiger Leaping Gorge is the narrowest section. There is a huge rock lying in the center of the river; dividing the riptide into two parts. It is said that a tiger once leapt from the east bank, clearing the rock, to land on the west bank. The name of the rock “Tiger Leaping Gorge Rock” comes from the legend.

It is said that Lijiang ruler Lord Mu was very rich at that time, there are quite a few talented people around him. One people among them had ability of fortune-telling. One day, he told Lord Mu his fortune, he said that Lord Mu was rich when he alive but he has no coffin available after death. Lord Wu was frightened, from then on anywhere he had to pass, every 10 li (li, a Chinese unit of length = 1/2 kilometer) was placing a coffin to fight against prediction. One day, the weather is wonderful, Lord Mu’s mood is admirable, he rode on his tiger, went along the side of Jinsha River where has he surging river and the picturesque riverbank. He and tiger went to a relatively narrow area, the tiger leaped to a large rock in the center of the river. The tiger landed but Lord Mu was not landing at the same time and had dropped into a rolling river. Time has passed, there left a tiger leaping gorge for future generations. There is another beautiful legend that Jinsha River, Nujiang River, Lancang River, Jade Dragon Mountain and Hana Mountain, originally they were five brothers and sisters. Three sisters grew up and made an appointment went out to find love; their parents were worried and angry and asked Jade Dragon and Haba to run after and take them back. Jade Dragon brought 13 swords and Haba brought 12 bows, they took a shortcut to Lijiang and took turns sitting there waiting for their sisters face to face, and they made a appointment that who let three sisters slipped would be beheaded. When it was Haba’s turn to guard, Jade Dragon just asleep, Jinsha came. The way was blocked by two brothers, how to do? Clever girl Jinsha remembered that Haba had an inclination to doze off, and then she sang as she walked and sang 18 songs continuously. Tactfully moving song can indeed make Haba addicted, gradually fell asleep. Jinsha grasped the opportunity, finally rushed past from the two brothers and laughed loudly on the way. Jade Dragon woke up and saw that, angry and sad, he was angry that Jinsha has gone far, he was sad that Haba would be beheaded. He couldn’t breach of contract, so he draw out the sword and cut Haba’s head, then turned back to cry bitterly, two rows of tears became a white water and black water, Haba’s twelve bows turned into 24 bends on the west bank of Tiger Leaping Gorge, and Haba’s head fell on the river and became the Tiger Leaping Stone.

Bus
For no direct bus to the Upper Section of Tiger Leaping Gorge in Lijiang, travellers can take a bus departing from Lijiang to Qiaotou Town(桥头镇) or Shangri-La and get off at Qihong bridge(霁虹桥), then rent a car heading to the tourist area in Tiger Leaping Gorge for 10 miles. The fee is usually around 60RMB.

Car Rental
The fee of 100-mile drive from Lijiang City to the Upper Section of Tiger Leaping Gorge in Lijiang is about 300-500RMB. You’d better renting a 7-seat van above 3 people and its fee is same as cab’s. Travellers can visit the Tiger Leaping Gorge by yourselves after getting there in two hours and the driver is  waiting for you at the park lot. Between April and June in the late spring and early summer and the autumn time during September to October is the best time to travel. During these two periods it is suitable to go hiking on the Tiger Leaping Gorge, also can see the Jade Dragon Snow Mountain scenery. The late spring and early summer the temperature is moderate, flowers on the meadow blooming like a piece of brocade which is charming.

After about 20 days of Mid-Autumn Festival, the plateau is autumn secnery which is the most wonderful time of Diqing plateau.

From June to September is the rainy season of Diqing plateau, although the scenery is beautiful, but not suitable to travel.

After October the temperature is very low, if one wants to visit need to bring enough warm clothes.
Tiger Leaping Gorge even in August is also likely to fall a few snowflakes, and day and night temperature difference is very big, there is a saying that “there are four seasons in a day”, so every season need to pay attention to keep out the cold. What to Eat in Tiger Leaping Gorge

Jade Dragon Snow Mountain is a mountain massif near Lijiang. It is the southernmost glacier in the Northern Hemisphere. There are 13 peaks all together and the group of mountains stretches about 35 kilometers from north to south. The highest peak is named Shanzidou at an altitude of 5,596m. On the eastern side of Jade Dragon Snow Mountain, there is a deep valley where the Yangtze River runs. Tiger Leaping Gorge is in the northern part of the valley and Yuhu Village Is located in the south of the valley. Travelers can see Jade Dragon Snow Mountain over Tiger Leaping Gorge, Yuhu Village, Black Dragon Pool Park and other locations.

Haba Snow Mountain is a mountain in southeast of Shangri-La, rising above the northwest side of Tiger Leaping Gorge, opposite off Jade Dragon Snow Mountain, with the highest peak of 5,396 m. It boasts glaciers, lakes and waterfalls and contains one of the best preserved nature reserves. Each year from June to August, millions of azaleas are in blossom. To avoid the rainy season, the best time to travel Haba Snow Mountain is mid-March to June, mid-September to mid-December.

The Location Map of The Upper Tiger Leaping Gorge Lijiang Side