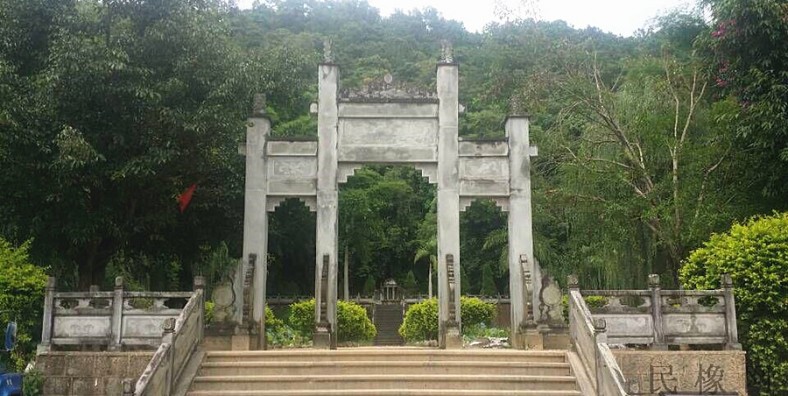 The reason why Yingjiang Tomb of Dao Anren became a tourist attraction is that Dao Anren made an important contribution to our motherland, as a patriot. He was chased as a general. The coffin was sent back to his homeland and buried in Fenghuang Mountain, Xincheng Township, Yingjiang County. It was destroyed during the Great Cultural Revolution. In 1994, the provincial government allocated funds for reconstruction.

Why is Tomb of Dao Anren So Special

The reason why Yingjiang Tomb of Dao Anren became a tourist attraction is that Dao Anren made an important contribution to our motherland, as a patriot. He was chased as a general. The coffin was sent back to his homeland and buried in Fenghuang Mountain, Xincheng Township, Yingjiang County. It was destroyed during the Great Cultural Revolution. In 1994, the provincial government allocated funds for reconstruction. On July 19, 1989, it was listed as the Dehong Prefecture Cultural Relics Protection Unit. In November 1993, it was announced as Yunnan Province the Forth Batch Relics Protection Unit. The tomb is 3.2 meters high, 3.741 meters long, 4.4 meters wide, and 2 meters wide at the end. It is inlaid with a figure-eight shape. It is an earth-filled tomb with a building area of 1,240.5 square meters. The passage length is 56 meters and the width is 3 meters. There are 29 steps.

Dao Anren (Yunnan patriot) is also known as Xi Anren, first name as Peisheng, male, the twenty-fourth Generation Tusi of Xuanfu Division in Ganya Yunnan(now Xincheng, Jiucheng, Nongzhang, Yingjiang County). In his youth, he repeatedly called on the Dai, Han, Jingpo, Lisu, and Achang people to fight against the British aggressors. He visited India and Japan to inspect the capitalist system. Under the influence of the democratic revolutionary thought, after returning to China, he engaged in revolutionary work in his hometown. In 1906, he went to Japan and established contacts with Sun Yat-sen and Song Jiaoren and other revolutionary parties and became an early member of the Tung Meng Hui(Chinese Revolutionary League). In 1907, he returned to China to implement industrial plans and reform cultural education and tusi system. In 1908, the uprising of Hekou in Yunnan Province failed, and its Tusi Yamen(Government office in feudal China) was used as a base for the revolutionary party to prepare for a new armed uprising. And the revolutionary members Zhang Wenguang and Liu Fuguo established the Revolutionary Organization Self-Government Comrades Association in Tengchong, and launched the Tengyue (now Tengchong) uprising on September 6, 1911, and established the Dianxi National Army Metropolitan Government. After the Revolution of 1911, he was arrested by Yuan Shikai’s government of the Republic of China. After being released from prison, he was appointed to the Army Department for consultation. In the spring of 1913, he died in Beijing.

Where is Tomb of Dao Anren -Location

It is located in Fenghuang Mountian, Xincheng Township, Yingjiang County.

How to Get to Tomb of Dao Anren

In the Tomb of Dao Anren, there are no transportation methods, such as buses. Self-driving and taxi are the best choices for visitors at the price of about 80 yuan, which takes about half an hour.

It is suitable to visit the the Tomb of Dao Anren all year around. Visitors can learn the patriotism of Dao Anren.

XiangEhu Lake
Located in the southwest of Jiucheng Town of Yingjiang County, the beautiful XiangEhu Lake is the gateway and business card of Jiucheng Town. There are natural wetlands, sparkling natural lakes, and thousands of acres of lotus ponds with unique charm. XiangEhu Lake has a large amount of water, is not dry all year round, has good water quality, and contains many trace elements needed by the human body. There are more than ten kinds of wild fish in the lake, as well as birds such as egrets, yellow ducks and wild ducks, as well as aquatic plants such as lotus, reed and water hyacinth.

Yunyan Stupa
Yunyan Stupa in Yingjiang County, also known as Manmengding Stupa, is located on the top of Yunyan Mountain, 1 km east of Yingjiang County. “Yunyan” in Dai Language means an auspicious, joyful and fascinating place. It is one of the most important Buddhist pagodas of Hinayana in Yunnan. The pagoda was built in 1947 and it took eight years to complete the work. Although it is a modern product, it is rich in ancient style and is listed as a key cultural relic protection unit in Yunnan Province.