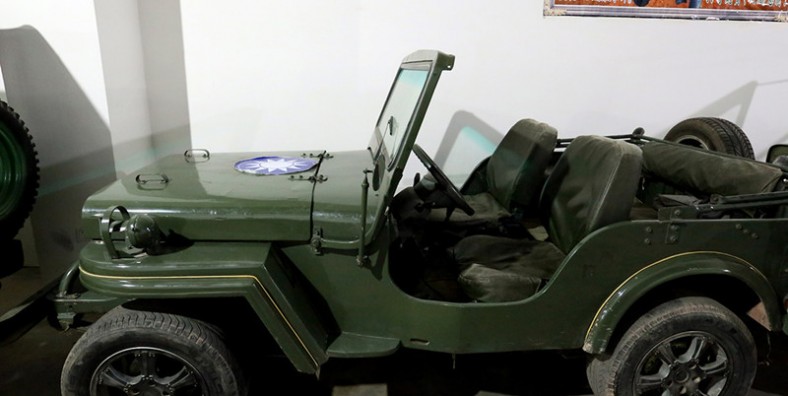 In Wanding Yunnan, as the border of China-Myanmar, there is a museum for antique cars, which collects more than a hundred of "Jeeps of Second World War". It is the same as the most famous local Wanding Bridge, which tells that period of war years to the later generations.

Why is Wanding Museum So Special

In Wanding, Yunnan, as the border of China-Myanmar, there is a museum for antique cars, which collects more than a hundred of “Jeeps of Second World War”. It is the same as the most famous local Wanding Bridge, which tells that period of war years to the later generations.

There are 227 world-class antique cars in the museum, in which, there are 105 American Jeeps, which are most eye-catching. The army green jeeps are lined up, which are magnificent. There are many well-maintained vehicles, which can be practicable now.

Where is Wanding Museum

It is located at the end of the Yunnan-Burma Road.

How to Get Wanding Museum

After arriving in Ruili City, car rental and self-driving are the best way to get to Wanding Museum, which takes about 40 minutes.

The 105 American Jeeps collected by Wanding Border Cultural Garden have a special meaning. After the completion of the Stilwell Highway, the US road construction expert General Pique led a team from the border crossing of the Wanding Bridge in Myanmar, including 105 Willis American Jeeps. In addition, the Chinese Expeditionary Forces’ allies in the West of Yunnan Province in the war against the Japanese out of the country, also called 105 Ma, and joined with the Allied forces in India.

The purpose of the usage of 105 is to hope that everyone can remember that Wangding was the base camp for the Anti-Japanese War in western Yunnan, and that China’s 100,000 expeditionary forces fought in the anti-Japanese War from Wanding to Burma. It is suitable to visit Wanding Museum at any time.

One-Tree Forest
In fact, One-Tree Forest is a large banyan tree, which has a history of more than 900 years, with 32 earial roots streight pinning into the earth. Banyan is a special and unique landscape in Ruili, it’s everywhere no matter in the vallies or villages or on the sides of the roads. people value banyan as holy tree, so they only plant these trees but don’t cut them. The big Banyan is in the one-tree forest park, and it’s 28 meters, what makes it more precious is that it has been standing there for over 200 years. The tree has many aerial roots hanging down from above, and they are interwined with one another, ending in the root. there are also so many aerial roots hanging down and they took roots in the earth, forming a forest that makes up of pillar-like roots, thus one-tree forest is shaped. It’s a very attractive and magical natural scenery. One-tree Forest has become a scenery that tourist must go, and it’s one of the hottest sceneries in Ruili.

Zhaduo Waterfall
Moli Waterfall is located in Moli Valley, also called Zhaduo Waterfall, and hides in deep mountains and forest. the clean water falls from 40-meter cliff, it’s like a white silk flying and dancing in the wind, you can hear the falling sound of water far away. There is a small brook flowing under the waterfall. The whole part of the waterfall is the soul of the scenic area, it’s very enjoyable to watch and feel the waterfall in the morning when the sun rises. It’s also very worthy to go there in summer, you can feel splashes from the waterfall and splash on your face, it’s very nice and cool.