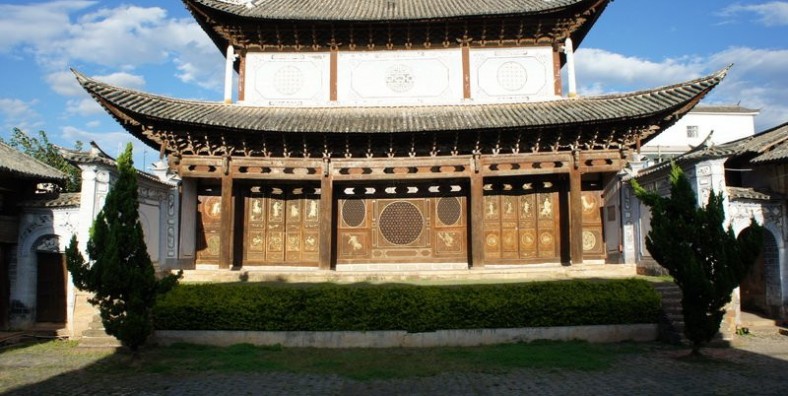 Weibao Mountain (巍宝山), also known as Weishan Mountain, is one of the birthplaces of the Nanzhao. In the past, he local Yi people held a temple fair in Weibao Mountain, which is the ancestral holy land of the Yi people. Today, Weibao Mountain enjoys the flourishing vegetation, towering trees and booming flowers. It is one of the famous Taoist mountains of China. The history of Weishan’s rising is recorded in “Cause of Weishan” of Tang Dynasty and “Picture Biography of Nanzhao” (by words). And along the south and north side of its peak, there are over 20 palaces or temples, among which Qingwei Temple, Doulao Pavilion, Peihe Tower and Changchun Cave are the largest. A large temple named Xunshan Temple, where Xi nuluo, namely, the first was mainly offered, is different from other famous Taoist mountains.

Why is Weibao Mountain so special?

Weibao Mountain was the birthplace of Nanzhao State and well-known for its sacred Taoist site. And it is also one of the famous mountains in southwest China with a good reputation of “the quietest place being in Weibao in the world”. This is recorded in the historical books of different dynasties.

Wibao Mountain is located in 10 km south from urban area of Weishan County. It is a famous Taoist mountain of China.

How to get to Weibao Mountain?

From Dali : take a bus from the southwest bus station in Xiaguan (下关).

There is a bus every 15 minutes and the journey lasts about 1 hour to Weishan.
From Weishan : there are no buses to Mount Weibao and you will have to hire one of the green mini-buses around the bus station. You probably want to negotiate the fare with the driver so as he waits for you.

Weibao Mountain was ever the farmland of the ancestor of Nanzhao, Xi Nuluo, who took refuge from Ailao Mountain to Mingshechuan and planted in Wei Mountain. According to the demise of King Zhangle Jinqiu of Jianning State, he founded Great Meng Kingdom and called himself King Qijia. Later, his descendants unified five Zhaos and established the brilliant government of Nanzhao in southwest China.

The history of Weishan’s rising is recorded in “Cause of Weishan” of Tang Dynasty and “Picture Biography of Nanzhao” (by words). And along the south and north side of its peak, there are over 20 palaces or temples, among which Qingwei Temple, Doulao Pavilion, Peihe Tower and Changchun Cave are the largest. A large temple named Xunshan Temple  , where Xi nuluo, namely, the first was mainly offered, is different from other famous Taoist mountains. • Taoism based, Buddhism compatible. In the Middle of Tang Dynasty, Nanzhao Kingdom vigorously advocated Buddhism. Although Weibao Mountain is still the important Taoist Temple in Dali area, the Buddhist elements permeated into Weibao Mountain, which can be seem in Guanyin Temple and Ganlu Pavillion.

The vegetation in Weibao Mountain is kept intact and there are many rare trees, such as evergreen chiquapin, cypress and camphor. Since the late Ming Dynasty or early Qing Dynasty,  the old camellia tree of 15m high and 28cm wide before Zhujun , has lived for 300 years. During early February, hundreds of bowl-like and red like rouge camellias are in full bloom.

During the Ming and Qing Dynasties, the Taoists in Wudang Mountain of Hubei and Qingcheng Mountain of Sichuan moved to Weibao Mountain and built more than Taoist temples, such as Zhunti Pavilion, Ganlu Pavilion, Bao’en Hall, Xunshan Hall, Wenchan Palace, Zhunjun Pavilion, Laojun Hall, Yuhuang Pavilion, Hall of Three Princess and Changchun Cave. This made Weibao Mountain the sacred Taoist site and there were hundreds of Taoists. These well-arranged, technically advanced, grand and elegant buildings reflected the religious and national features with rich and colorful sculptures and carvings. The Qing fresco, carved on the piers of Wenlong Pavilion in Wenchan Palace depicted the scene of song competition of Yi nationality. It was a very rare cultural relics. And it was highly exulted when its copy was exhibited in Beijing. It is Taoist ancestral hall of the ancient Taoism, Weibao Mountain; the Taoist Temple is located at the peak of more than 2,000 meters above sea level in the back hill of Qibao Mountain. Although it only covers an area of two acres, it is a mysterious natural creation. It is the wonderful scenery of the Weibao Mountain. It combines natural and cultural landscapes with a reputation for ancient, secluded, exotic, beautiful and clever. Today, the Taoist temple still completely preserves the legacy of the Ming and Qing Dynasties, reflecting the long-lasting charm of the Taoist culture of the ages.

Weishan Ancient Town is located at the foot of Ailao Mountain. It is a historical and cultural city known as the cradle of Nanzhao Kingdom. First built in Yuan Dynasty, Weishan Ancient Town has been changed to the brick city and remained the style and features until today. As the place that carry out Tusi System for the longest time in Yunnan, the long history of Weishan breeds numerous temples, echoing with the natural landscape at the diatance. Donglianhua Village is a village of Hui ethnic minority. It is one of the Muslim communities with the most traditional Hui culture in the Weishan County, enjoying the most quaint folk customs, the most colorful folk customs and the richest traditional culture. The whole village offers a flat terrain and convenient transportation. Its foundation can be trace back to early Ming Dynasty. There is also an important bridge built on the Bonan Ancient Road(博南古道) in the Wanli Period of the Ming Dynasty – Yongji Bridge(永济桥), which preserves Zhaozhong Temple in the Qing Dynasty and Du Wenxiu Uprising Site, also the Cultural relics protection units such as the military field, Dadongmen, and the masses.

During the period from February 1 to 15 (according to lunar calendar) the traditional Worshiping Fair is held. And thousands of people from all directions come here to visit.  This period is the recommended time to visit Weibao Mountain.

During the period from February 1 to 15 (according to lunar calendar) the traditional Worshiping Fair is held. And thousands of people from all directions come here to visit.