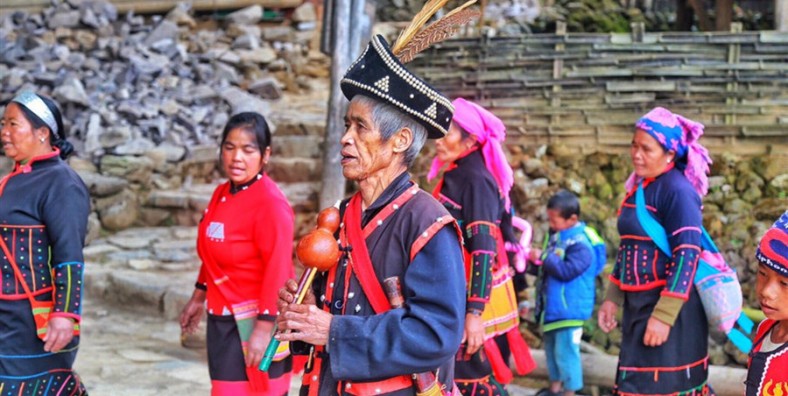 Wengding Wa Ethnic Village(翁丁佤寨) is an over 400 year-old Wa ethic village. Wengding means where the clouds are floating since mists often cloak the mountains throughout the year. People who live there have been called“ the last tribe of China’’,it has preserved the typical style of Wa residential architecture and primitive folk customs. Surrounded by lush trees, the village consists of 98 households with over 400 residence Of Wa people. The local elder stated that the woods protect the safety of the village. Inside of village has the best preserved cottages, totem, the woods, Village pillars and worship places, which reflects the splendid history and culture of Wa people. Black is auspicious color of Wa people. The elder, men and women, prefer holding tobacco pipe when they are free.

Why is Wengding Wa Ethnic Village so special?

Wengding Wa Ethnic Village is one of the best- preserved ancient Wa ethnic communites in China today, also the intangible culture heritage protection unit and historical village of Yunnan Province. The Village was list as the third batch of national famous tourism villages with characteristic landscape by the Ministry of Housing and Urban Rural Development and National Tourism Administration. It is also one of top 10 beautiful village of Lincang City. It is known as the last tribe of China.

Wengding Village(翁丁村) , is located in the southwest of Lincang, Yunnan province. It is 17km away from the township government and 39 km from the seat of Cangyuan county.

How to get to Wending Village?

The traffic there is very convenient and the roads to country side are laid with asphalt. It is about 40 km from Cangyuan County. It takes you 1 hour to drive to the Wending Village.

Follow the path to inside of the village, the thatched cottages and the livestock shed are next to each other. Women in Wa national costume weaving cloth in the courtyard, children playing and have fun together. The ox are around everywhere. Talking a Walk to local village’s home, the hospitable villagers will treat you with black tea and dialect. A branch with green leaf hanging in the entrance of the house means that a home born with a new life. You will have a commanding view of the village on the top of the hill ,smoke is curling up from the cottages, everything looks serenity and peaceful. Taking a random walk inside the village, the very first thing comes into your sight is the aged village and tall Banyan trees, guarding the villages for hundreds years. At the same times, you may shocked by the bull head hunging on the village entrance, and it is looks mysterious and amazing.

For centuries, Wengding still remains the railing architectural style, there are two types of cottages: those that single and lonely old people are live in the oval low cottage; those that two –story railing design enable people using the ground floor for feeding livestock and the upper for accommodation. In addition, local villagers will build a storage room without lock near the cottages to keep food. The Wa people believe that the woods besides the village can not be cut for guard the village, so the whole village is surrounded by lush tree.

Wengding Wa Ethnic Village enjoys the charming landscape and traditional architectures etc. It is a approving place to discover the traditional Wa culture. Village pillars, the village heart and Sigangli(a wooden stick) are the most mysterious power of the village. The three items stand in the middle of the village and they were believed to be the core of the village. It is a wonderful gathering place with a heavy flavor of life where is suitable for kinds of activities, such as playing ground for children, date for the young, leisure for the elder and worship for local people.

Village pillars, as the core of the village, they believe that as long as you have a sincere heart for pray, your dream will come true. Above the pillars there placed a lot of daily necessities such as crop stick, it is s pray for the rich harvest. From the bottle to top of the pillars, there are 13 layers in total with tripod, iron pot, pot circle and others, which means the reproduction of human beings. There is a bamboo stick and crop-made wreath standing at the highest of the pillar. The wood boat is the source of life in Sigangli tale, the wood bird standing at the boat to help herd and the wood fish swimming under the boat.

There is a public room, 5 m away from village heart, which provide for the young has date and those temporary stopover.

Huotang, a Chinese style fireplace, is one of holy custom to Wa people. Wa people light the fires in their new home and they will not extinguish the fire. The fire means harmony and prosperity for home and family. “Monihei Carnival” (making you black) is a mud smearing carnival of the Wa ethnic group. It is originated from the folk custom that people smear the pot ash, ox blood and mud on their faces to frighten the evils and seek peace. The Monihei Carnival is held in late April or early May each year in Cangyuan County, one of the only two Chinese Wa autonomous Counties in southwest China’s Yunnan Province.

Tourists can use natural paints to smear each other and pray for each other. “Monihei Carnival” has attracted more and more tourists both from home and abroad to join the activity.

Cangyuan Cliff Painting (沧源岩画), the oldest cliff painting of China, enjoys the history of 3000 years. It is painted with red paint with fingers or feathers. Pigments may be made from animal blood and hematite powder. The cliff paintings mainly describe the hunting activities, production activities and entertainment activities etc. There is also a war triumph, a picture of the bamboo house and the people who hold the weapon and get back with victory. The rough and simple painting is an important material for studying the history of the ancient nationalities of south of China.

1. Best time to visit: Travelers can visit the Wengding Wa Ethnic Village during April 29 to May 1, you can enjoy the local carnival in this period and discover more traditional culture.

2. Acoommodation: Travelers can accommodate at the home of villagers. It is relative cheap to eat and stay in their home.

3. Respect the local custom of Wa people, especially their believes.