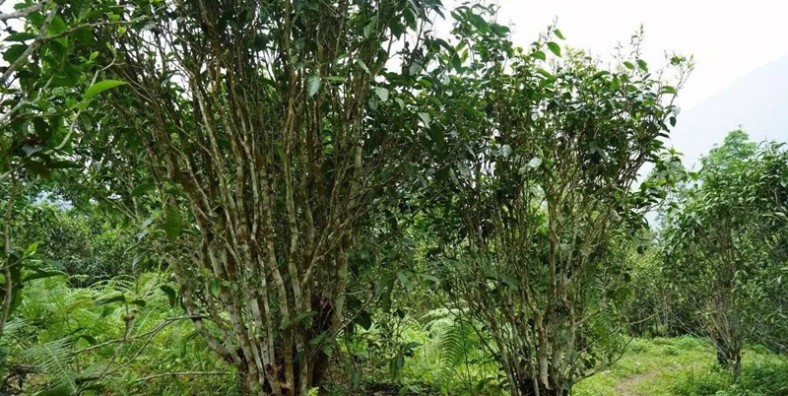 Yiwu,The Hometown of Pu’er Tea. Yiwu Town is situated in the north of Mengla County, Xishuangbanna Prefecture. It is the hometown of Pu’er Tea as well as the starting point of the Ancient Tea-Horse Trail (Road). In old times, Yiwu was known as a commercial city. It serves as the linkage between China and Laos and an important gateway to the Southeast Asia. The Yiwu name has picked up considerable steam and now carries significant sway in the pu’erh market. As a result, what is marketed as Yiwu tends to come from a very large area.

Why is Yiwu Mountain so special?

As the hometown of Pu’er Tea, Yiwu has conserved in good conditions historical relics of the “Ancient 6 Teas Mountains”.  Strolling on the old streets of Yiwu, one will be greeted by time-honored trademarks of tea businesses such as Cheshun, Qianlizhen, Anle and Tongxing etc. Tea trees can be found in every mountain, and every village plants tea. This is exact appearance of Yiwu Tea Mountain.

Where is Yiwu Mountain?

How to Get to Yiwu Mountain?

Travelers can get to Mengla County at first, then change bus or take local motorbike to Yiwu Tea Mountain. It is also a good idea to cycle or hike to Yiwu Mountain.

Long-Distance Bus is an important way getting to Mengla County, which could be accessible from Kunming, Jinghong, Puer, Luang Prabang, etc.  Here we list some of the bus information for your reference. Historically, Yiwu is famous for being the center of distribution for tribute tea to be sent to the emperor. The six famous tea mountains produced mao cha where it would be collected and sent out to Beijing from Yiwu. This trade brought a large number of Han merchants (the principle Chinese ethnic group) to the area to trade tea (source). Some of the more famous examples of aged pu’erh (from the 1930s) also originated here. i.e. Fuyuanchang, Tongqin Hao and Songpin Hao.

From the 1940s until the 1990s, tea production shifted away from these regions to Menghai County where Menghai Tea Factory planted ground. During this period, tea that was produced was usually unceremoniously sold as raw mao cha to the larger factories.

When China began to open up to the west, many Taiwanese traders visited Yiwu hoping to find both tea production and more aged tea. They found neither, but ended up helping the locals to restart tea production. As a result, the greater Yiwu area has strong ties with the Taiwanese market. Many of the Taiwanese pu’erh brands have strong ties to this region. This is covered far more thoroughly in Zhang Jinghong’s Ancient Caravans and Urban Chic.

In Zhang’s book she characterizes the Taiwanese and Yiwu style as emphasizing the hand-made and traditional aspects of tea-making, a supposed contrast from the more production oriented Menghai County tea. Yiwu tea operations tend to be smaller, often family-oriented, whereas Menghai County is more densely populated with major operations, i.e. Menghai Tea Factory .

Main Attractions and Things to Do

Yiwu is known for a distinctive softer, less punchy base with a long-lasting sweet aftertaste when compared with other pu’erh regions, i.e. Bulang/Banzhang. There are a number of growing regions within the greater Yiwu area, including the six famous tea mountains. These areas all represent Yiwu to some extent, although there will even be significant variation moving from one region to the next.

Note #1: Because Yiwu is a township and a county, it is ambiguous as to what exactly constitutes “Yiwu”. This has not stopped tea producers from constantly marketing and using the Yiwu name to sell tea.

Yiwu also is endowed with Karst sights some of which are Huashegongzhu Cave (Cave of Princess Snake), Nametiancaiyun Cave (Colorful Clouds Cave) and Gaoshanluoshui Cave etc.

About 500 meters in the northeast of Yiwu, the Snake Princess Cave is in fact a dolomite. It’s known for the patriotic poems by Xu Ziheng, Li Shouchang and Dao Chengzhang all of whom were officials in the Qing Dynasty. More spectacular than the Snake Cave, Nametiancaiyun Cave is noted for stalagtites and stalagmites all of which are queerly shaped. It integrates natural and cultural sights, tropical rain forests and Karst caves, thus bringing forth picturesque sceneries.

Yiwu is a multi-ethnic village, there are many ethnic live here together, such as Han, Yi ethnic, Dai ethnic, Yao ethnic, Hani ethnic.

Yi people are indigenous group of Yiwu village, which can date back to Han Dynasty. Diligent and kind Yi people keep a simple life style, work with sunrise and stop at sunset.

The Torch Festival is a traditional festival for the Yi ethnic group. It falls on the 24th of the sixth month of the Chinese calendar, and the celebration lasts for 3 days. The origin of the festival is related to ancestors’ worshipping of the fire, which is believed to have the power to repel insects, ward off evils, and protect the growth of crops. In some villages, it is a tradition for the elderly to pass down their farming experience to the younger generation during the festival.

During the festival, big torches are erected in the village, while small torches are placed in front of each household. When the night falls, an altar is set up and the holy flame is lit up. The Bimo (village flamen) will chant prayers, light up torches from the flame, and pass them to the villagers. Villagers, holding the flame, walk around the village, houses and the fields, and place the torches in the field corners to drive away evils. Inside the village, young men and women sing and dance around bir burning torches throughout the night.

Xishuangbanna Tropical Botanical Garden (Chinese name: 西双版纳热带植物园) was built in 1959, is the biggest and richest botanical garden in China nowadays. Since 1996, this garden combined with former Kunming Ecological Research Institute, formed an independent research institution attached to Chinese Academy of Science. With the time goes by, it becomes a comprehensive garden that combined research, preservation and education of tropical plants together.

Wangtianshu Scenic Attraction is the only oasis at 21 degrees north latitude, and has been recognized internationally as China’s unique tropical rainforest. What is the most impressive in the park are the towering Shorea chinensis (Sky Trees) that are the rainforest iconic images in South and Southeast Asia. An Air Corridor (Kong Zhong Zou Lang), 2500 meters long and 36 meters high, has been built on the high canopies. It remains a challenge to both visitors and scientists. The well-protected tropical rainforest that was discovered by the Chinese reputed botanist Mr. Cai Xitao (1911-1981) and witnessed by Prince Philip of the UK, surprised many people when it was unveiled to the outside world.  With hotels and air corridor, you can travel and lodge here. ●It is better to prepare some mosquito products and sun block in case of insects and sunlight.
●It is better to take T-shirt, short and slippers becauce it is too hot in Xishuangbanna.
●Respect the local customs of Yi and other minorities.
●Take care of yourself when climbing Yiwu Mountain.