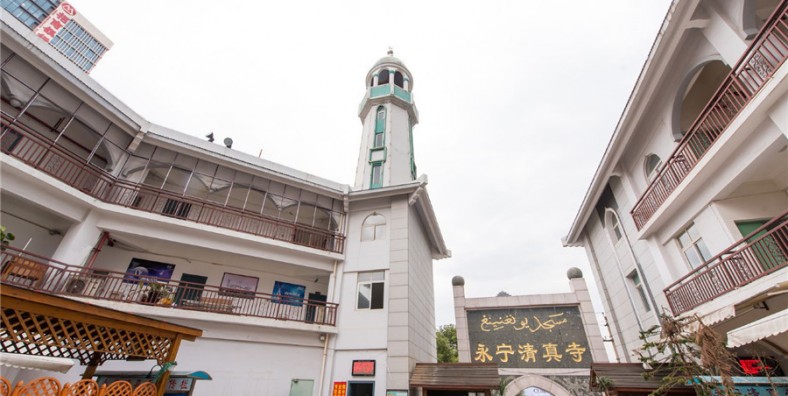 Kunming Yongning Mosque is located in the west section of Jinbi Road, Kunming, Yunnan. According to the History of Kunming County, it was built by Sayyid Ajjal Shams, the governor of Yunnan Province in the Yuan Dynasty. Director Naguo Xiang suggested that Yongning Mosque should be rebuilt as a modern building. With the support of the government and the support of Muslims, it finally broke ground on December 25, 2007. The new temple was completed ahead of schedule on December 5, 2008. In less than a year, a building with Arab characteristics combined with the traditional Chinese pattern sprang up.

The original site was in Donglai Street, which was called “Fish Market”, also known as “Donglai Street Mosque”, destroyed in the end of the war. There was a reconstruction in Ming Dynasty(1647-1661), renamed the “Yongning Mosque.” According to the tablet, the temple is the largest of all the mosques in the province, and was destroyed in the Qing Dynasty (1856) when the Qing army suppressed the Hui uprising. The existing Yongning Mosque was rebuilt in 1898. It was rebuilt by wooden structure in 2007 and completed ahead of schedule in December 2008.

Kunming Yongning Mosque’s layout is like a quadrangle. There is a hill-shaped gatehouse facing north and there is an open patio in the door. The hall of worship is a pure wood structure on the top of the hill. In the middle of the door is hung a wooden plaque of “the true palace”. It has an area of about 200 square meters. In front of the hall, there is a covered gallery with pictures of mecca pilgrimage on both sides of the walls. On the opposite side of the hall, there are seven rooms, which are used for the gathering. The side of the hall has a classroom, a chamber. The bathroom is located behind the chamber. Although the scale of the temple is smaller than that built in the past years, but the temple education has been thriving, mosques throughout Yunnan imams, the master of the school had studied here. Yongning Mosque is located at No.153, Jinbi Road in Xishan District. We provide 3 ways for tourists to choose.

Tourists can take Line.3 subway to Wuyi Road Station, and walk about 10 minutes to Yongning Mosque.

It takes tourists about 15 minutes to Yongning Mosque from downtown of Kunming by taxi.