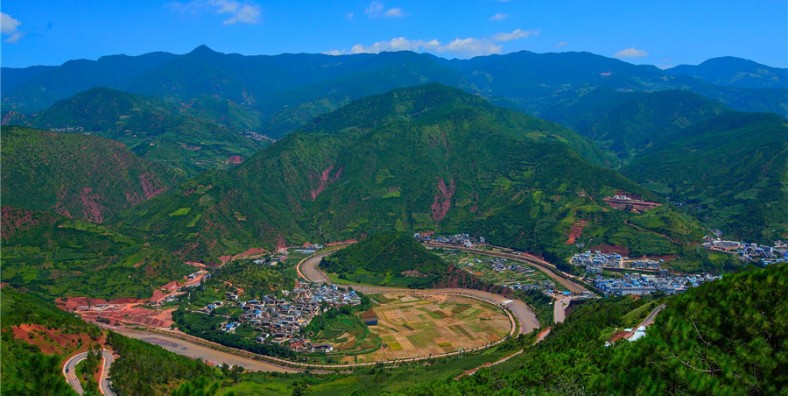 To the north of Yunlong county, there’s a river named Bijiang River(沘江), whose riverbed forms a shape of Taiji symbol. Because in Han Dynasty, Yunlong county was called “Bisu ” county, the Bijiang River, in fact, means “a river in Bisu”. With a whole length of 173 km, the river curves into a big “S” shape when passing here, forming a natural spectacle of Taiji symbol. In this natural spectacle, the Zhuangping dam in the north and Lian-jing-ping dam in the south constitute the two fish-like patterns representing “yin” and “yang” respectively in Taiji symbol, making it more vivid. What is called “Taiji Symbol” is a symbol used by ancient Chinese to explain natural phenomena in the universe, showing the the law of unity of opposites between yin and yang. Normally, there are also Eight Trigrams arranged in octagon around the symbol. And it is always a symbol of Taoism.

Where is Natural Taiji Eight-Diagram?

It is one part of Bijiang River, 1 km north of urban area of Yunlong County, Dali.

How to Get to Natural Taiji Eight-Diagram?

It is near the urban area of Yunlong County. Travelers can rent a car or cycle to it.

Get in Yunlong County

2.By Airplane and Bus

If you want to take plane, you need to go to Kunming Changshui International Airport to take airplane to Dali Airport. It costs your 55 minutes. When you arrive at Dali Airport, you need to take bus to Yunlong County Passenger Station and it needs 2.5 hours.

3.By Train and Bus

4.By High-speed Train and Bus

If you want to take a high-speed train, firstly, you need to go to Kunming South Railway Station. Secondly, you should spend 2.5 hours on the road. When you arrive at Dali Station, you need to take bus to Yunlong County Passenger Station and it needs 2.5 hours. To the northeast and south of the symbol, there are groups of taoist constructions, and to the northwest, there lying the famous “Pearl of the West Yunnan Plateau ” —-Tian Pond. Nuodeng river pours into Bijiang river through the very middle part. Therefore, this pattern is also called “Taiji locks up water”.

Lion and Elephant Guard the Gate(狮象把门)

What’s more, the hill on northern Zhuangping dam is like a lion’s head, and the hill on southern Lian-jing-ping dam is like a trunk of elephant, thus people called this “Lion and elephant guard the gate” for Nuodeng village, which is a Bai village with a history of more than a thousand year, lying 4km away from the Taiji symbol.

Standing in the west of the Bijiang River overlooking the “Tai Chi” pattern, the image is very realistic. Every summer and autumn season, the Bijiang River is like a red ribbon, two fish-shaped dams are like two green silk carpets, and the surrounding Yunling mountains are covered with clouds and fog, and the mountains are floating. It is like the legendary Taiji Tianyi used by Tiangong. The “Taiji” is facing the Yuhuang Pavilion of Nuodeng in the east of the mountain, and the Sanqing Hall in the south of the Hutou Mountain. The combination of natural Taiji symbol and highest shrine temple reflects the harmony of man and nature in Taoism.

The story of the transformation of the ocean into farmland also takes place in the “Taiji”. It is said that the prince of Dali Longwang came to Yunlongshan and found a lake, so he settled down here. Then he loved a pretty girl and followed her to the mountain. Then he moved the lake to form the Tianchi, and the original lake changed. It became a piece of farmland and later became “Tai Chi.”

Nuodeng, a thousand-years town, a famous historic and cultural village of Yunnan province. Located in mountainous area, it is far away from the hustle and bustle of metropolis. It is the true place with original flavor of life. Except for the profound history, Nuodeng is the important place of Ancient Salt and Horse Road. Salt is the key point of Nuodeng Ancient Town. Walk in the Nuodeng Ancient Town and view the busy Ancient Salt and Horse Road.

1.When the weather is fine in Dali, the sunshine is heated, and ultraviolet light is strong. People should avoid direct sunlight, and the sun hat preparation is required during outdoor activities, a pair of sunglasses will make you comfortable in the trip.

2.When the weather is right-cooler nights and warmer days, especially November through January according to locals the mists here are preternaturally lovely. Best photo-op times are mid to late afternoon.