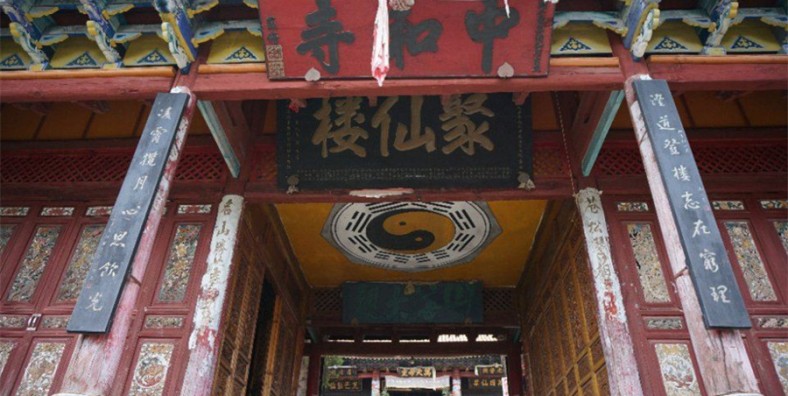 Zhonghe Temple(中和寺) is named after the Zhonghe Peak of Cangshan, built on the mountainside of Zhonghe Peak. It was once crowned by the Emperor Kangxi of the Qing Dynasty. Built in Ming Dynasty, it is one of the famous Taoist temples in Dali. On the 9th day of the first lunar month, the “Songhuahui” of the Taoist which is a activity to offer sacrifice to Jade Emperor is the grandest temple fair of Zhonghe Temple. Enjoying the continuous pilgrims, the fair lasts for more than 10 days. Due to its special location, it is the best place to overlook the landscape of Cangshan Mountain and Erhai Lake.

How to get to Zhonghe Temple?

There is tourism cableway in Mt. Cangshan. Next station is located in west of a racetrack in Dali March Street, and the previous station is Zhonghe Temple. Travelers also can choose to climb Cangshan Mountain. By Bike: Rent bicycles in the old town and get out of Cangshan Gate and ride another 1 kilometer to the foot of Cangshan Mountain.

By Walk: Get out of South Gate and walk west along Yita Road for about 1.9 kilometers or get out of Cangshan Gate (West Gate) and walk along about 1 kilometer to the footpath

Zhonghe Temple was built in the Nanzhao Kingdom of Tang Dynasty(AD 738-902) firstly. During the Jiajing period of the Ming Dynasty (AD 1522 ~ 1566), it was rebuilt. To the Xianfeng period of the Qing Dynasty (AD 1851-1861), it was destroyed again. The only remaining Lingxiaobaodian Hall and Juxianlou are the buildings that rebuilt in the twenty-sixth year of Guangxu (AD 1900). In recent years, the Wangmu Hall, the North and South Linguan Pavilion and the Guanhai Promenade have been rebuilt. The “Songhuahui” of the Taoist is the most prestigious temple fair of Zhonghe Temple, offering the sacrifice to the Jade Emperor. Zhonghe Temple has become one of the famous Taoist temples with more worshippers in the Dali area. According to the general religious knowledge, the Taoist temple should only be dedicated to the Taoist statues. However, there are also Buddhist statues here. This is the product of the integration of Buddhism, Taoism and Confucianism in Dali. Cangshan Mountain lies west of Dali Ancient City and Erhai Lake and includes 19 peaks and 18 streams. Mt.Cangshan’s 19 peaks extend 50km north to south in their column formation like a screen. The highest peak is Malong Peak with the height of 4,122 meters (13,524 feet). Waterfalls and surging rivers emit thunderous roars. Malongfeng, the main peak, shoots up into the sky with its top clogged with dazzling snow all the year round. ‘Clouds, Snow, Peaks and Streams’ are four spectacular views of the Mountain. May and June are the perfect months to visit Cangshan Mountain since at that time it’s carpeted with many kinds of flowers.  The azaleas  are the most eye-catching.

3 thoughts on “Zhonghe Temple of Cangshan Mountain in Dali City”