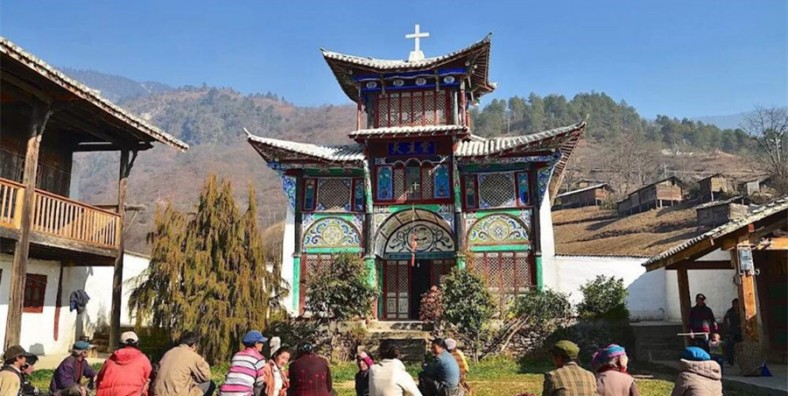 Baihanluo church is located in Baihanluo village, Bingzhongluo town, Gongshan county. It was built in the 24th year of the reign of emperor Guangxu of the Qing dynasty (1898), in wooden construction combined in Chinese and Western style.

Open Hours: All the Day

Located in Baihanluo village, Baihanluo church was built in the 24th year of the reign of emperor Guangxu of the Qing dynasty (1898), in wooden construction combined in Chinese and Western style. It covers 454 square meters. The door is of the arch style with six matting fan, the second floor with arched windows, the third floor for the bell tower. In 1905, the local people held an anti-foreign religious revolt and burned down the church, which was known as the “Baihanluo case”.

Baihanluo church is the oldest church in the Nujiang area. At the end of the 19th century, French missionary Annet Genestier arrived at Cawalong area from Kangding to preach. A few years later, Catholicism was introduced to the Gongshan area. The introduction of Catholicism violated the interests of the local Lamaism and prevented its members from paying tribute to the Lamaism. Up to 1905, anti-foreign religion activities and expelling foreign priests cases broke out at the border of Bingzhongluo including Deqin, Yanjing, Zhongdian, Batang, etc.

On the night of the 20th of July at the same year, more than 200 local people armed with machete and spears attacked the church and set fire to it. This is the case of Baihanluo. Annet Genestier heard the news in advance and run away. He came to Kunming and asked the governor-general office of Yunnan and Guizhou to pay 300,000 taels of silver and send army to suppress the mob. At last, the office took the method of giving him an official position and paying 50,000 for rebuilding the church.

That Baihanluo church, built over a hundred years ago, is much more spectacular than the existing one. The excellent craftsmen of Jianchuan Dali made this church beautifully and magnificently. On the vaulted roof of the church beautifully painted murals that telling stories from the Bible. Stepping into the chapel in candlelight is like stepping into heaven. By Bus
The only access to Bingzhongluo by road is from the south via Liuku, Fugong and Gongshan. A direct bus to Liuku leaves at 8am every morning from the front of Yudong Hotel. It stops briefly at Gongshan, then long enough at Fugong for a quick lunch. Two buses leave from Liuku at 6:20 and 8:20, arriving in Bingzhongluo in the afternoon. The trip takes 8 hours though schedules sometimes vary so it’s best to check before buying your ticket.

After arrived at Bingzhongluo, tourists can hike to Baihanluo church or take a chartered car to.