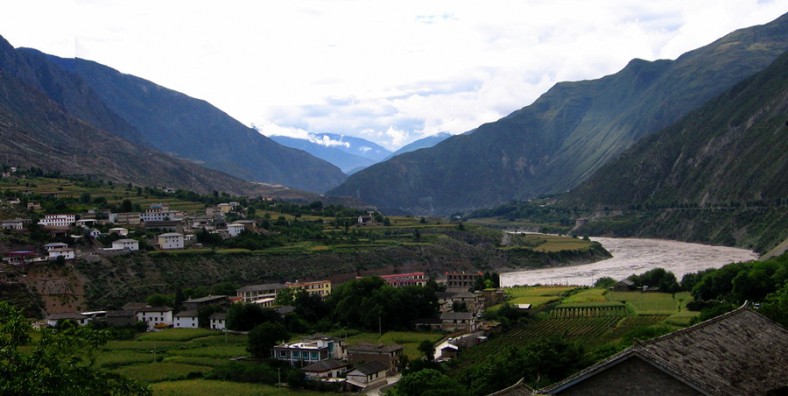 Benzilan refers to “beautiful sand dam” in Tibetan. Located in Deqin County, Diqing Prefecture, Yunnan Province, at the foot of Baimang Snow Mountain, on the west bank of Jinsha River, facing Shangri-La City and Derong County of Sichuan Province across Jinsha River, Benzilan is the only way to the “the Ancient Tea Horse Road”.

Location: in the southeast of the county of Deqin County, Diqing Tibetan Autonomous Prefecture of Yunnan Province

Why is Benzilan Town So Special?

Benzilan is an important traffic route from ancient times to the present. What’s more, there are many attractions around Benzian, such as Meili Snow Mountain, regarded by the public as the best spot to catch the fascinating sight of Meili Snow Mountain at sunrise or sunset. It’s a vital place to get into Yubeng Village, Baima Snow Mountain, Dongzhulin Temple, and Mingyong Glacier.

Where is Benzilan Town – Location

Benzilan is located at the foot of Baimang Snow Mountain, on the west bank of Jinsha River, facing Shangri-La City and Derong County of Sichuan Province across Jinsha River, Benzilan is the only way to the “the Ancient Tea Horse Road”.

All of the long-distance buses from Shangri-La to Deqin Coutny pass through the town, for Benzilan at 2:30 a.m. from Feima (horse statue). In fact the mid-point lunch stop is often taken a mere five minutes south of Benzilan.

There are a growing number of hostels and guest houses in Benzilan. They are different in standards and types, and also have wide price ranges. It’s a better choice to stay there rather than Deqin County. Tourists can enjoy a fabulous view of Benzilan.

Dongzhulin Monastery
Built in 1667 and located in Benzilan Town of Deqin, Dongzhulin Monastery is the largest one of the three Gelu Sect monasteries in Deqin County and one of the religious cultural activity centers in Kangnan District. With orderly-distributing architecture complex, the lofty monastery can be mistakenly deemed a town when looked from the distance. Benzilan is very hot in summer due to the typical dry-warm valley climate. Compared with other months, October is the best time to visit Benzilan, when it will not be too hot or too cold.

► The temperature difference is big between day and night, especially when it rains. Tourists should take some thick and long sleeves with you to prevent getting cold.

► Do not forget to prepare some cold medication, intestinal medicine band-aid, daily necessities and medicine.

► As Benzilan is located in a valley at the altitude of 2022 meters, the ultraviolet (uv) radiation is very strong that you should bring sunhat and sun scream with you. One thought on “Benzilan Town in Deqin County, Diqing”