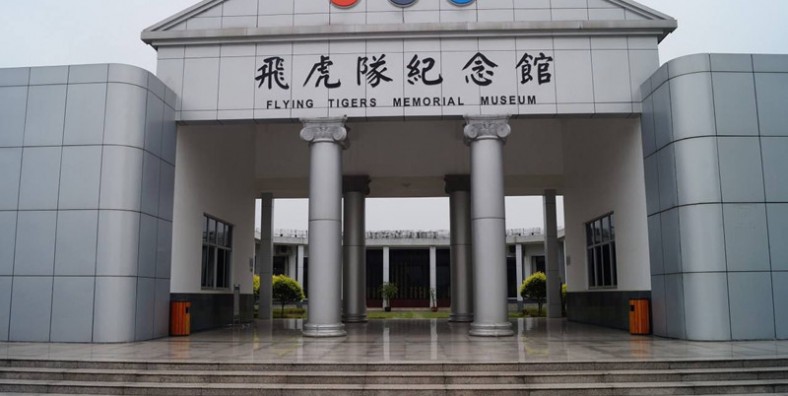 A small but important part of that complex story has found a modest home in Kunming. The Flying Tigers Museum (昆明飞虎队纪念馆) is housed in a wing of the Kunming Museum on Tuodong Lu.

The Name of “Flying Tigers”

In 1941, the 1st American Volunteer Group, better known by their nickname the ‘Flying Tigers’, began military action against the Japanese in the skies above China and Burma. Although supported by the US Government, the group was technically a mercenary ensemble and was sent to China, some historian’s claim, before the US had officially declared war on Japan.  Led by retired US Army Air Corps Officer Claire Lee Chennault, the Flying Tigers originally consisted of 100 rather basic Tomahawk fighter planes, each packaged and sent to Burma from a factory in the US. After being reconstructed and tested at the training base in Toungoo, each plane was painted with what was to become the group’s insignia – a shark’s head with bared teeth. Supporting the Chinese military, whose airforce had been almost entirely decimated by the Japanese, the Flying Tigers achieved a number of important tactical victories throughout 1941 and 1942. One such victory included the discontinuation of Japanese bombing over Kunming, a city integral to the defence of Burma Road. In 1942 the American Volunteer Group was disbanded and replaced by the US Army’s 23rd Fighter Group. The name the Flying Tigers was maintained along with the group’s shark head logo. According to some sources the Flying Tigers destroyed 2,600 Japanese planes (300 alone in the first year), 44 warships and killed almost 67,000 Japanese soldiers throughout their four year campaign (1941-1945).

1. Through a nondescript entrance lies a large entry hall leading to a wide staircase. From the base of the stairs a model of a Curtiss P-40 Warhawk can be seen hanging from the ceiling, backed by giant black and white photos of the Flying Tigers in action.

2. “Tigers in the Sky”: The exhibit’s English title is “Tigers in the Sky” and the history of the squadron’s origins begins immediately inside the door. Photos of key political and military figures line the walls, accompanied by placards in both Chinese and English that thoroughly explain the story of the Flying Tigers — officially named the First American Volunteer Group (AVG). Although the English descriptions are not grammatically perfect, they are some of the best we have seen in Yunnan. 3. Much is made of the iconography of the Flying Tigers and logos are displayed everywhere in the museum. Upon first seeing the insignia for the Flying Tigers, some people may think it a bit cartoonish. That may have been intentional — the logo was designed, in a wonderfully ironic twist of fate, by vehement anti-communist Walt Disney.

4. The emblems emblazon many of the leather bomber jackets on display and individual fabric patches also sit behind glass. Interestingly, many of the fatigue jackets in the museum are marked with camels on their backs. Each camel represents one Japanese plane shot down.

5. The final section of the museum displays a short black and white documentary about the involvement of the local Chinese men and women who assisted the Flying Tigers whilst they fought the Japanese. With the history of the Flying Tigers gaining momentum among historians, further exhibitions and memorials are planned for the future.

Chennault was called out of retirement and put in charge of the Flying Tigers in 1941. He was chosen largely because of his preference for air combat over high-altitude bombing campaigns. Under his supervision, the Flying Tigers would shoot down or otherwise officially destroy 297 Japanese planes.

In addition to spelling out his military exploits, the museum display focuses heavily on Chennault’s marriage to Chen Xiangmei (陈香梅), a reporter covering the Burma Campaign for the Chinese press.

The Flying Tigers Museum is located at No. 71, Tuodong Road and is part of the under-renovation Kunming Museum. Walk through the main gate and past a plaza that is currently used as a parking lot. The entrance is marked by a plaque.

By Taxi: It takes tourists about 8 minutes to The Flying Tigers Museum from downtown of Kunming by taxi.

1. Tourists should protect public facilities, or they must pay the full price for anything damaged.
2. No smoking and No spitting.