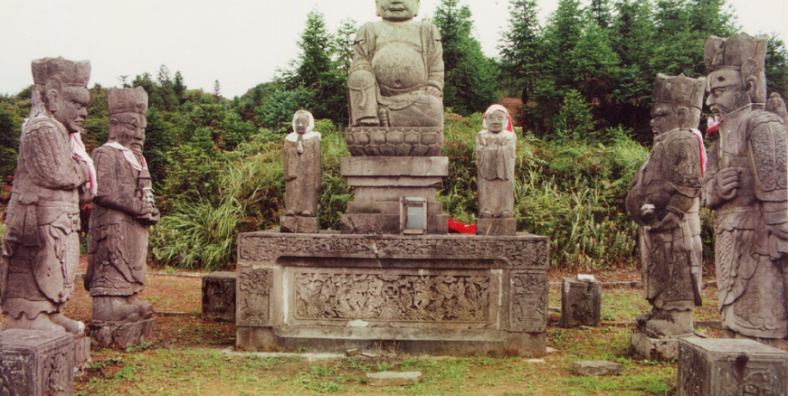 The existing 64 statues and more than 300 sets of relief sculptures of Guandoushan Stone Carving all present magnificent cultural, artistic, aesthetic and religious values, which are one of the representative works of modern Chinese stone carving art.

Where is Guandoushan Stone Carving – Location

The main peak of Guandoushan mountain is 1880 meters above sea level. Due to warm and humid climate, with abundant rainfall and rich soil, the vegetation on the mountain is quite rich and diverse. In the spring, things come to life, flowers in green and birds singing, a scene of vitality; in the summer, lush trees and cool climate makes it an excellent place for summer heating; in the autumn, with the fragrance of wild, the mountain is covered with maple leaves and mountain ash leaves, as picturesque; in the winter, the white snow on the branches is like black dragon and white phoenix, quite interesting. Guandoushan mountain is a famous religious mountain in eastern Yunnan and southern Sichuan. The temple on Guandoushan Mountain was built in the Ming dynasty, flourished in the Qing dynasty and the republic of China. In the Ming dynasty, centering on Guandoushan mountain, more than ten temples such as Kunlunshan temple, Xiaoxitian temple and Shensuolinshan were built. The temple was destroyed during the cultural revolution, only the ruins of Nine halls left. The first hall is Fozu Hall(佛祖殿), has the three stone statues of the thousand-handed Guanyin, Manjusri and Huochi Buddhas. The third hall has the stone statues of Queen Mother, the Eight Immortals, etc. In the fourth hall, there are the stone statues of Sakyamuni, Confucius and Lord Taishang. In the sixth hall, the Taoist gods and ancient mythological figures are enshrined, including Wuji, Nuwa, Pangu, Shennong, Xuanyuan, etc. The statues in the seventh hall, eighth hall and ninth halls are all stone carved.