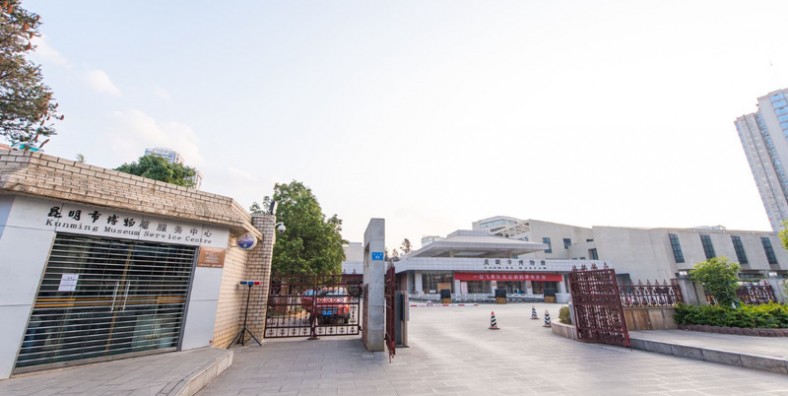 The Kunming City Museum is a historical museum and one of the popular tourist attractions in Kunming City, which is encompassed by the Yunnan Province in China. The museum is quite comprehensive for a local museum; all in all, it occupies an area of 5,000 square meters.

Although smaller than the Yunnan Provincial Museum, it attracts a lot of visitors thanks to its many notable exhibits. Some of these are repeats of what can be found in the provincial museum, but it has several unique offers of its own, including a historical exhibit offering a glimpse of the city’s history.

The Dali Sutra Pillar – The Highlight of the Museum The Kunming City Museum is also the home of the Dali Sutra Pillar. Found on the ground floor, this pillar is an astounding pagoda-like sculpture from the Song dynasty. It is 6.5 meters high and is made with pink sandstone. The pillar is made up of seven tiers full of images of Buddha and statues of guardian gods perched on subjugated demons. The pillar is then filled with a mixture of Chinese and Tibetan script, including what is known as the ‘Dharani Mantra’. On top of it is a ring of Buddhas carrying a ball above them; this ball is believed to symbolize the universe. At the bottom, the pillar is supported by an octagonal base.

The Dali Sutra Pillar was originally erected by the Dali regent, Yuan Duoguang, who dedicated it to the memory of his general Gao Ming. It used to be part of the now defunct Dizang temple. It is considered as a powerful work that reflects much of the authentic energy that used to surround ancient Chinese sculptures.

A brilliant branch of Chinese civilization of bronze, the Yunnan Bronze Culture is famous for its unique style, which was initiated in B.C. 12th century in late Shang Dynasty (1600B.C.-1100B.C.) and ended up in A.D. 1st century in late Western Han Dynasty (206B.C.-24A.D.) In academic circles, the bronze culture of Yunnan Province is divided into four parts on the basis of the features of unearthed bronze wares, that is, bronze of Dianchi Lake area, bronze of Erhai Lake area, bronze of northwest Yunnan and bronze of south Yunnan. Kunming Museum exhibits gracefully-shaped bronze wares of Dianchi Lake area, which were excavated in Dianchi Lake and its peripheral region. Bronze articles include bronze drum, bronze pot for keeping money, bronze pillows, bronze button ornaments, and so on. And all the pieces come from the tombs of nobles. Dhvaja, or Jingchuang in Chinese, is a Buddhism ornament architecture in the temples which is generally carved with lections and Buddhas. Named after the Temple, the Ancient Jingchuang Exhibition of Dizang Temple was built on the former site of the Temple to protect the Dhvaja, which was inscribed as a key national protected site in 1982. Dizang Temple, in memory of the highest military-political official of the Kunming, was built during the period of the Kingdom of Dali (1096-1253). Its Jingchuang, caved from five red sandstones, is a pagoda-shaped building with 7 storeys and eight faces in a height of 6.5 meters. On the Jingchuang, there are totally 300 caved Buddhas, of which the highest is 1 meter high and smallest is less than 3 centimeters high. All of these Buddhas are vividly caved in elegant shape with fluent lines and fine proportions. In addition, kinds of Buddhism sutras are also caved on the Jingchuang in both Chinese and Sanskrit. The Jingchuang of Dizang Temple is praised by experts as the art exquisite that none other can not be found by its delicate carvings and the large number of sutras.

4.  Exhibition of the Historical and Cultural City of Kunming

Displayed in the two exhibition halls of History and New Look, the exhibition displays the time-honored historical culture, glorious revolutionary tradition, picturesque natural landscape and the great achievement made since the reform and opening up. A small but important part of that complex story has found a modest home in Kunming. The Flying Tigers Museum (昆明飞虎队纪念馆) is housed in a wing of the Kunming Museum on Tuodong Road.

2.Exhibition Department (展览部): Responsible for the compilation, design, production of long-term exhibition outline, drawing up the exhibition plan, project application and so on.

4.Custody Department (保管部): Responsible for drawing up the collection plan and budget, providing the collection information, organizing the appraisal, evaluation, grading and so on.

6.Research department (研究部): To be responsible for the research of history, museology, archaeology and so on, to draft the articles of association and daily work of the academic committee, and to report and organize the implementation of social science projects.

7.Science and Technology Protection Department (科技保护部): Responsible for formulating the work plan for the protection and restoration of cultural relics collection, organizing and implementing, planning, declaring, evaluating, establishing and arranging scientific research projects, as well as the supervision of scientific research projects, the review of achievements, etc.

Kunming Botanical Garden (KBG) was established in 1938. It is affiliated to the Kunming Institute of Botany under the Chinese Academy of Sciences. It has an area of 44 hectares. The Garden is a comprehensive institution with the main task of ex-situ conserving and sustainably utilising the rare and endangered plants, endemic taxa, and economically important plant species in the Hengduan Mountains and in the Yunnan Plateau. The Camellia Garden is one the oldest and most important specialized gardens within KBG.

Kunming City Museum is located at No. 93, Tuodong Road of Panlong Diatrict.

By Taxi: It takes tourists about 8 minutes to Kunming City Museum from downtown of Kunming by taxi.

The museum houses a series of shops that sell fake fossils and minerals, Chinese paintings, textiles, porcelains, and furniture. If you’re looking for souvenirs from your China trip, you may want to check them out.