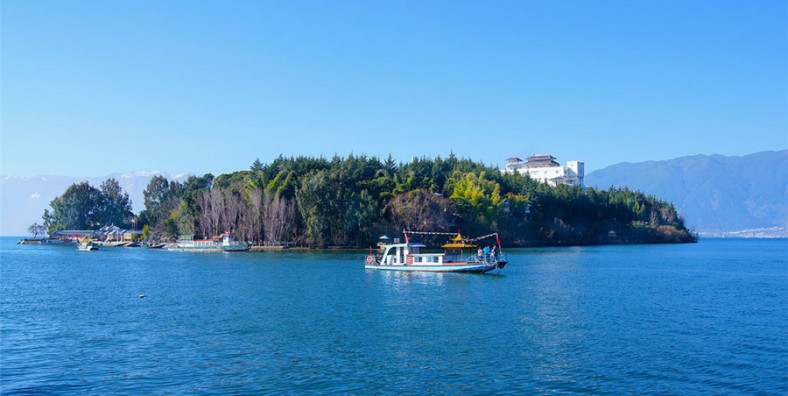 Nanzhao Folk Island is a tiny island in large Erhai Lake near the village Shuanglang. It is one of several islands and islets that dot the lake. It was turned into a Nanzhao theme park and resort complex in 1999. Before that, it was called Yuji Island. In the theme park, you can enjoy the sights of the lake and the surrounding region from the heights on the tree covered hill. There is also a small beach with white sand. The island is in the northeast part of Lake Erhai. Along with the natural trees and the lake for scenery, there are specially built attractions and a small amusement park. Nanzhao Folk Island is tiny, but it is big enough to have a big hotel sitting on the crest of the hill, a dock, some villas, and a park with trees. If you want to get away and relax in a villa or the hotel, it may be a place for you.

Why is the Nanzhao Folk Island so special?

Nanzhao Folk Island is one of the top three islands of Erhai Lake. Enjoying the unique tourism resources, it is the top attraction of Erhai Lake. It was listed as one of the 25 tourism boutique projects in Yunnan Province, and was the designated reception unit of the Kunming World Horticultural Exposition in 1999.

How to get to Nanzhao Folk Island?

Travelers can take the ferry boat to the island about 5 minutes. In addition, the Erhai cruise ships usually stop at Nanzhao Folk Island. Private cruise ships usually require 100 yuan for a half-day tour, but they can bargain; the Erhai Grand Cruise will also stop at Nanzhao Island, with a boat fare of 140 yuan. There are national performances on board.

It was said that the ancestors of Nanzhao were a woman named “Shayi”. She made a living by fishing. In the process of fishing, she touched the sinking wood and became pregnant. So she gave birth to ten sons, and then there was another one woman under the Ailao Mountain who gave birth to ten baby girls. Ten boys marry with the ten girls, amd they lived happily with each others. The sculptor Professor Ye Yushan carved a painting of God’s paintings and represented more about their daily life like farm work and sacrifice ceremony etc.

Cruising to the island from the south, you can see the coppers statues on the bank, named “Daughters of Erhai Lake”. Two fisher girls play and take bath here, one standing and one lying. There are also the statue of Shayi, ancestor of the local people in the local legend. In Yunnan Fuxing Square, the statue of Goddess of Mercy stands in the center. This statue is 17.5 meters tall and is made of white marble. It is the special Goddess of Mercy in Nanzhao culture, named as Acuoye. Nanzhao Palace is the main architecture of Nanzhao Island, covering an area of 8,000 square meters. It combined the architecture styles of Tang Dynasty, Nanzhao and Tibet, representing the multi-ethnic cultural integration of Nanzhao Kingdom. It was the holiday resort of the King of Nanzhao. Currently, it is an advisable place for sightseeing and holiday.

Bai people worship the patron god, Benzhu. They have many patron gods, like immortals and diverse characters in daily life, even the normal things like stone and tree. They are heroes in Bai’s legends. The highest Benzhu is Duan Zongbang who established the Dali Kingdom. He was called as the central patron god. Travelers can discover more about Bai ethnic culture.

The Three Pagodas,the symbolic building of Dali, was first built in the time of Nanzhao Kingdom and Dali Kingdom in 9th and 10th century. Looking from a distance, the pagodas are like three ballpoint pens standing between the magnificent Cangshan Mountain and elegant Erhai Lake.

Cangshan Mountain,located west of Dali Ancient Town and Erhai Lake, is with nineteen peaks and eighteen streams. Travelers can take cableways to reach the top of Cangshan Mountain or explore the breathtaking scenery along Jade Cloud Road. Dali Ancient Town is a historic town with rich culture located between Cangshan Mountain and Erhai Lake. Unlike any other Chinese town, the traditional Bai ethnic houses give the town distinctive feel. Travelers can wonder in this leisure town to appreciate the unique ethnic architecture and discover its profound history and culture.

Erhai Lake (Ear-shaped Sea), known as “Pearl of Plateau”, is the second largest highland lake of Yunnan. Since the lake has a shape of an ear, it gets the name Erhai (Ear Lake). Taking a boat and cycling around the lake are fantastic ways to explore “Silver Cangshan Mountain and Jade Erhai Lake” scenery. It is ranked the second in Yunnan Province and the seventh freshwater lake in China by area and water storage.

The best time to visit Erhai Lake should be from June to August, during that time is very comfortable. The seasonal variation of Dali is not obvious, there is no obvious hot summer and bitter winter. And the weather in Dali is spring all the year round.

1.Negotiate about the price of a boat ride before you get in.
2.A good way to see the sights in the valley is by rented bicycle.
3.The ancient district of Dali is a pedestrian area that is kept free of vehicles.
4.If you to stay on the island, you can choose the villas or the hotel.

Yongping Town of Jinggu County in Puer City
Jinchihe Village of Jindun Town in Heqing County, Dali
Would you like a cup of tea?
Qianshi Moutain in Jianchuan County, Dali
Grand Marshal Residence of the President in Dali City
15 Days Panorama Yunnan Tour from South to North
How to Get to Yunlong County from Kunming
How to Get to Dali from Kunming