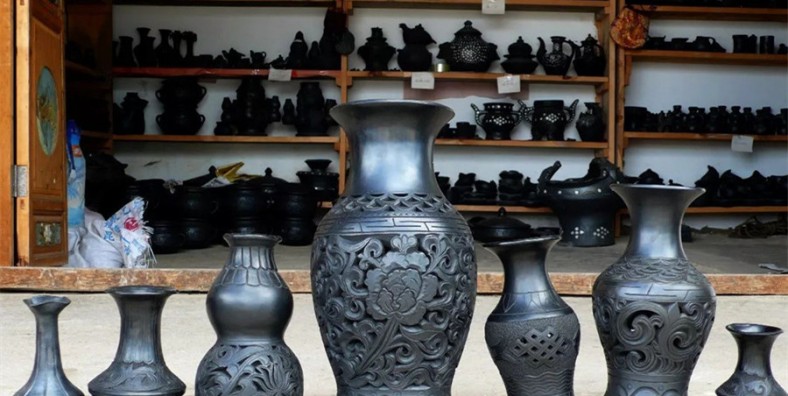 Nixi Pottery Village is a small Tibetan village nestling along the popular adventure route from Deqing to Zhongdian of the famed Shangri-La in Yunnan Province. It is well known for the century-old art, making pottery.

Why is Nixi Pottery Village So Special?

As a small village standing by green grassland on which flocks of yaks, sheep and horses graze, it gives a sense of timeless tranquility. However, it is best known for its traditional black pottery, a miracle among Tibetan handicrafts, which can date back 4,000-5,000 years ago. Nowadays many visitors would always make a stopover here, perhaps buying some wares or just watching how the locals deal with their ancient art.

Where is Nixi Pottery Village – Location

Also called Tangdui Village, Nixi Pottery Village is a small Tibetan village nestling along the popular adventure route from Deqing to Zhongdian of the famed Shangri-La in Yunnan Province. It is 38 kilometers Northwest of Shangrila City, Yunnan.

At Shangrila Bus Station, tourists can take the coach running to Weixi, Tacheng, Deqin and get off at Nixi Village.

Renting a car from Shangrila to Nixi Village is the best way to visit it. Nixi Village has a long history of potting, most of which are fire pans, fire pots and kettles. The raw material clay, is taken from a mountain three kilometres away. The potting skills have been carried on for nearly one thousand years. Nixi black pottery enjoys great prestige in northwestern Yunnan Province and the whole Tibet area for its unique appearance and special function for cooking which can make the food more delicious.

the pottery-making process is rather complex. First of all, the clays are patted into sticks by the wooden bats, and then they are kneaded into various shapes by hand; at last, they are fired in a kiln after polishing and decorating.

About 70 percent of the families in the village are engaged in pottery-making. Thanks to the fine quality, even people from Tibet travel here to get black potteries.

Napahai Lake Natural Reserve covers an area of 3,125,000 square metres, rising 3,266 metres above the sea level, while the lake covers 660,000 square metres. The natural reserve is flat, surrounded by mountains. In winter or summer, you will be shocked at the snow-cladded mountains, Naqu River, Naizi River and other ten meandering rivers flow into Napahai Lake through the grasslands.

The park, located in Nixi Township, Shangrila Town, Diqing Tibetan Autonomous Prefecture, southwestern Yunnan Province, covers an area of 176 sq km and is the only scenic area named after “Shangrila” in Yunnan. According to Sina Dingzhu, founder of the park, the Bala Village is the only village in the grand canyon. It is said that the villagers are descendants of a heroic tribe in neighboring Sichuan Province and moved to the canyon 1,300 years as they were tired of war.

Built in 1667 and located in Benzilan Town of Deqin, Dongzhulin Monastery is the largest one of the three Gelu Sect monasteries in Deqin County and one of the religious cultural activity centers in Kangnan District. With orderly-distributing architecture complex, the lofty monastery can be mistakenly deemed a town when looked from the distance.