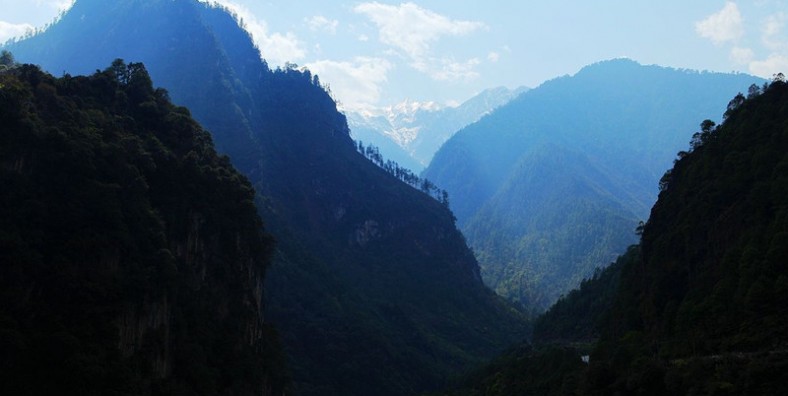 Shimen pass is the only passageway between the northern Nujiang river and the ancient tea horse road in Tibet, Biluo snow mountain on the left and Gaoligong mountain on the right. Nujiang gushes out of the Shimen pass and flows down, magnificent and spectacular.

Open Hours: All the Day

In the north of Bingzhongluo, two cliff straight up along the river bank and form a large stone pass in the height of 500 meters and in the width of 200 meters hence the name ‘Shimen Pass’. Shimen Pass is a stunning landscape lying on a beautiful slope along the river bank. It is the essential way to get into Yunnan-Tibet. There are two stone pendant on the side of Shimen Pass of Nujiang river called Stone Umbrella. At the top of the cliff is a flat piece of land surrounded by a type of palm tree that will molt every year, which is the only rare plant in the world with only a few hundred at present. The local people call Shimen Pass ‘Nayi Qiang’. Nayi means Fairy Cave. Qiang means Pass. The whole word refers to a pass that the celestials also have difficulty passing through. There are five Tibetan inscriptions engraved on the wall, of which the first, second and third are the words the followers said to the seventh Gamala which says “We believe in you, we respect you, Galama”. The fourth one says Amituofo Chant and the fifth one says the mountain god bless the passing pedestrians safe, no haunted and no falling stone.

Every year around the Dragon Boat Festival, a number of different-colored boa snake climb out of the cave to bask in the sun, the longest about 10 meters, which make the Shimen gate more mysterious. According to the Buddhist scriptures, the boa snake first appeared 300 years ago. According to the legend, the Tibetan language on the rock wall of the Shimen pass is for the purpose of suppressing the boa snake “dragon” .

By Bus
The only access to Bingzhongluo by road is from the south via Liuku, Fugong and Gongshan. A direct bus to Liuku leaves at 8am every morning from the front of Yudong Hotel. It stops briefly at Gongshan, then long enough at Fugong for a quick lunch. Two buses leave from Liuku at 6:20 and 8:20, arriving in Bingzhongluo in the afternoon. The trip takes 8 hours though schedules sometimes vary so it’s best to check before buying your ticket.

After arrived at Bingzhongluo, tourists can hike to the Shimen Gate or take a chartered car to.