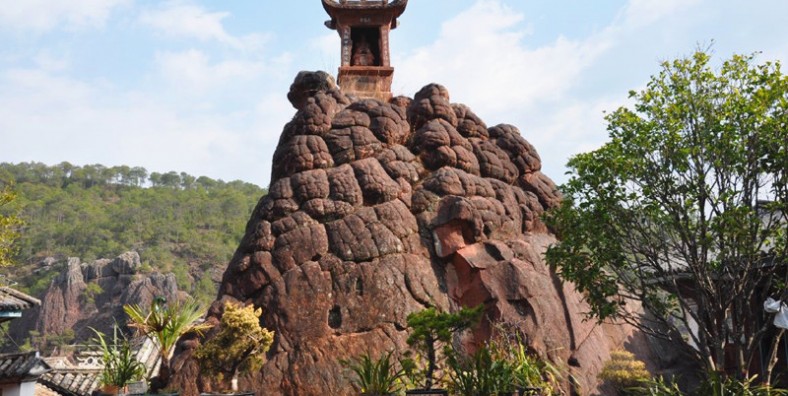 The Shizhong Mountain Grottoes (石钟山石窟) is located 25 kilometers southwest of Jianchuan County, Yunnan Province. It is considered the “treasure of the south.” The carvings were constructed during the the Nanzhao and Dali periods (738-1253 A.D.). The 17 grottos and 139 statues make up one of the most beautiful grotto complexes in South China, with statues of the royal Nanzha family and other historical figures, as well as Buddha statues.

Shibao Mountain is famous for its natural beauty as well as the local Buddhist caves, sculpture and
temples. Amongst rocks of various strange shape and size, the slopes of the mountain are covered

with azaleas and other green vegetation. There are two main tourist attractions on the mountain, namely the Shizhong Caves and Baoxiang
Temple. The caves were created during the Song Dynasty.

One hundred and thirty-nine statues of Buddha in 16 grottoes are scattered throughout Shizhong Temple, and Shiziguan and Shadengqing of the
Shizhong Temple section. The Baoxiang Temple section is the most scenic attraction of Shibao Mountain. The Baoxiang Temple has a reputation
as the “suspended Temple”. Thousands of stone steps ascend to the Cascade, Stone Tower, Sky Ladder, and Ancient Bridge, halls and pavilions.

The grottos had been gradually chiseled and sculpted from the Nanzhao (local regime in Yunnan
Province from 700~900 during the Tang Dynasty) to the Dali (during the Song Dynasty), which
lasted several hundred years (c.649-1094).

The optimal season to visit the Shibao Hill is the end of the 7th month and the beginning of the 8th
month of the lunar calendar. There is a traditional singing and dancing jamboree held each year,
which never fails to enchant visitors.