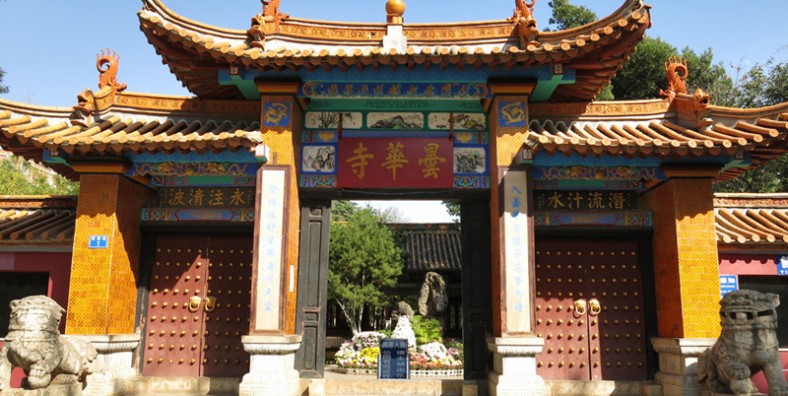 Tanhua Temple, also called Taohu Nunnery, is located at the foot of Jinma Mountain in the eastern suburb of Kunming City. With an area of 8 hectares, it originally was a thatched shack of Shi Shiqiao, a scholar of the Ming Dynasty (1368-1644). During the reign of Emperor Chongzhen(1628-1644), his grandson, Shi Tai, donated the estate for the shack whereon Tanhua Temple was built. And it rebuilt after the earthquake during the reign of Emperor Daoguang. There was an epiphyllum tree in the backyard, which came from India according to legend, which is called “tanhua” in Chinese and honored as “Buddha’s Flower”, hence the name “Tanhua Temple”.

Tanhua Temple is known for its luxuriant trees and showy flowers. At the beginning of the republic of China, the abbot Yingkong was good at gardening and famous in Yunnan. He made the trees and flowers in Tanhua Temple green and bloom in every four season. The plants such as peony, cymbidium, orchid, Myanmar osmanthus and Malus halliana were very famous at that time. Now, it still attracts a lot of tourists both at home and abroad every year.

In the backyard there was an epiphyllum tree, which is called tanhua in Chinese, hence the name. The temple went through many renovations during the Qing Dynasty. It is well-known for its flowers and plants. It has been a scenic spot for more than three hundred years, and an epitome of Kunming, the Flower City of the Southern Frontier. The epiphyllum tree was planted in the side court of the depository of Buddhist Scriptures. There is a stone tablet on which four characters are carved “The Epiphyllum Brings Luck”. After the erection of the temple, the original epiphyllum withered and died. The epiphyllum now standing taller than the eaves of the templeeavefrom the root of the original one at the beginning of the Qing Dynasty, and is about three hundred years old. It bursts into flowers in mid-summer. The big loquat tree in the backyard is said to have been planted in the early Ming Dynasty. In the South Garden there are flowers and rockeries with winding paths among the flowers and the zigzagging corridor surround the Lotus Pond, where you can watch fish. The East Garden is shaded by tall cedars and cypresses and include seven smaller gardens and a Children’s Playground.

Whether the Spring Festival comes early or late, the peonies in Tanhua Temple can bloom perfectly during the holiday while the natural flowering period is usually in March and April. Thanks to the specific cultivation techniques which makes the natural growth law of peony broken. It is easier said than done. In the greenhouse of over 6,000 square meters in the park, different batches peonies are placed in line. The peony flower seedlings were like firewood sticks 2 months ago, however, they became luxuriant after more than 50 days. Besides complicated processes, the degree, the light, and the watering are significant factors influencing the time and quality of flowering as well. Tanhua Temple is divided into three parts, including the front garden, middle garden and back garden. The front garden is mainly base on the Sanjin Courts. There are pavilions, artificial hill, trees and flowers in it. The flowers and rockeries with winding paths among the flowers and the zigzagging corridor surround the Lotus Pond, where you can watch fish. Middle garden is bigger than the front garden. It is shaded by tall cedars and cypresses and includes seven smaller gardens and a Children’s Playground. In the back garden, there is a Ruiying Tower with a high of 48 meters, which offer for visitors to look far into the distance to enjoy the beautiful sight of whole garden.

Golden Temple is the biggest and heaviest as well as the best preserved copper temple in China. It is a key national cultural and historical relics. The whole temple reflects the excellent metallurgical and casting technology more than 300 years ago in Yunnan.

The Kunming City Museum is a historical museum and one of the popular tourist attractions in Kunming City, which is encompassed by the Yunnan Province in China. The museum is quite comprehensive for a local museum; all in all, it occupies an area of 5,000 square meters.

Kunming Zoo, also called Yuantong Mountain Zoo, located in the Yuantong Mountain, northern section of Qingnian Road, northeast of Kunming city. Founded in 1953, with about 200 kinds of Yunnan specialty animals and rare animals in the world, Kunming zoo is one of the national top ten zoos and seven major zoos in China. As one of the eight scenes of Kunming, Yuantong Mountain is a willow leaf that is long and narrow. It covers a total area of 26 hectares and presents the most abundant and the most visited park in Kunming. The annual visitor even has reached 3 million people. The most attractive things are flower boom, animal and temple. Yuantong flower boom is regard as the most especial activity and is listed as one of the famous spots to appreciate sakura in China.

How to Get there？

It takes you about 20 minutes to Tanhua Temple from downtown of Kunming.