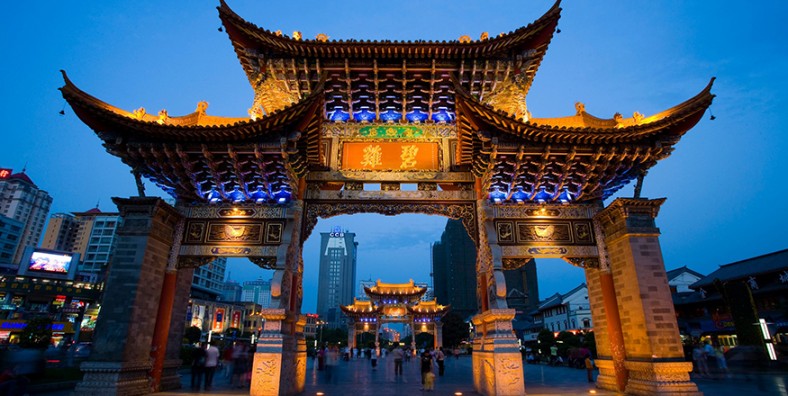 Why is Jinma Biji Archways so special?

The true uniqueness of Jinma Biji Archways lies in one particular magical moment known as “Jinbi Jiaohui”: Gold and turquoise intertwining. Just before the sunset, the golden rays of the sun illuminating the Biji Archway from the west, cast its shadow on the square to the east. And at the same time, the light of the moon, just risen from the east, casts the shadow of Jinma Archway on the paving stones to the west. With the movements of the sun and moon, the shadows of the two archways gradually draw closer to finally connect, a moment known as “Jinbi Jiaohui”.

History of The Golden Horse and Jade Rooster Archway Built in China’s Ming Dynasty, it has history of more than 400 years. Right on the central axis of old Kunming city, it is located in the center of downtown Kunming.

The Golden Horse Archway is in the east against the mountain with the same name as the archway; the Green Rooster Archway is in the west against the Green Chicken Mountain. Within a short distance of each other, the two archways are in the traditional archway styles. Together with another Loyalty Archway on the other side, these three archways shape a triangle of archway clusters. With their distinctive characteristics they present a spectacular view in the midst of surrounding downtown modern buildings.

The Name of “Jinma” and “Biji”

No one exactly knows where comes the name for the Jinma Biji archways. Some say the names of Jinma and Biji are named after the two nearby mountains called Jinma and Biji. But some goes much further. They think the Golden Horse and the Jade Rooster are the gods of the Sun and the Moon. What’s their reason? The magic moment when the shades of the Jinma and Biji approach at sunset and the rise of the moon. The archways of Golden Horse and Jade Cock were built on an east-west axis, not far from each other. At 5 or 6 p.m. on the day when Autumn Equinox (September 22, 23 or 24 of the Gregorian calendar) and the Mid-Autumn Festival (August 15 of the lunar calendar) of the year of cock (you year. There are 12 symbolic animals associated with a 12-year cycle, often used to donate the year of a person’s birth. One of the animals is cock) happened to be the same day (it happened once every 60 years), when the sun has set and the moon is rising, the shadow of sunshine on Golden Cock becomes longer gradually and the shadow of moonlight on the Jade Cock becomes clearer [Traditional Chinese calendar calculated the passage of years, months, days and hours by combining one Heavenly Stem (tian gan in Chinese. The 10 Heavenly Stems are jia, yi, bing, ding, wu, ji, geng, xin, ren and gui) and one Earthly Branch (di zhi in Chinese. The 12 Earthly Branches are zi, chou, yin, mao, chen, si, wu, wei, shen, you, xu and hai) to form 60 unique pairs in a complete cycle. In the lunar calendar in use today, only years and days are in such cyclic pairings]. Then the shadows of Golden Cock and Jade Cock draw near bit by bit and finally become one shadow. That is the splendid scene of the overlapping shadow of Golden Horse and Jade Cock. There are two huge arches on Jinma Biji square: Golden Horse Arch in the east and Jade Rooster in the west.

The Eastern arch in the direction of Mount Jinma is called Jinma Archway; the Western arch in the direction of Mount Biji is called Biji Archway. Together with the northern “Zhong-Ai Gate”, in memory of Sayyid who was a famous politician in Yuan Dynasty(1271—1368), they are known as the “Pinzi Sanfang”: three gates forming the shape of the Chinese character pin, a triangular layout composed of three rectangular forms. A major landmark in central Kunming, it contrasts with the Nanzhao Kingdom Eastern and Western Pagodas, which still stand in south Kunming, representative of the architecture of a more ancient Kunming civilization.

Jingxing Flowers and Birds Market: Located at Yongdao Street (甬道街), Jingxing Flowers and Birds Market was opened for business in 1983, gathering vendors selling flowers, birds, fish and so on, and finally became the biggest flowers and birds market in Kunming. Local people of the city, especially children getting pocket money during the Spring Festival, like wandering around this oldest flowers and birds market to buy the merchandise they like or shop with eyes only.

Yuantong Temple: It is one of the oldest Buddhist monasteries in Kunming with a history of more than 1200 years. It is also the largest temple in Kunming.

Kunming Zoo: It’s also called Yuantong Mountain Zoo, located in the Yuantong Mountain, northern section of Qingnian Road, northeast of Kunming city. Founded in 1953, with about 200 kinds of Yunnan specialty animals and rare animals in the world, Kunming zoo is one of the national top ten zoos and seven major zoos in China.

Take Subway Line 1 or 2, get off at Dongfeng Square Statin and walk for about 15mins to Jinma Biji Archway.

1. There are several public houses behind Golden Horse and Jade Cock Archways. The most famous one is Hump Bar. The place bustles every night, and it is a very good place to taste the local food.
2. It is a nice place to go since many fashion shops, fancy shops, restaurants, and health clubs, pubs, pleasure grounds, supermarkets and sight-seeing minibuses cluster in the Golden Horse and Jade Cock Pedestrian Street.

No. K12 Bus Route in Kunming
Napahai Lake in Shangri-La
Cloudland International Youth Hostel in Kunming
How to Get to Songming County from Kunming
Fahuasi Temple and Grottoes in Anning City, Kunming
COP15 of the UN Convention on Biological Diversity (postponed)
The Lake Course of Kunming Spring City Golf & Lake Resort
Region Map of Jinning District in Kunming