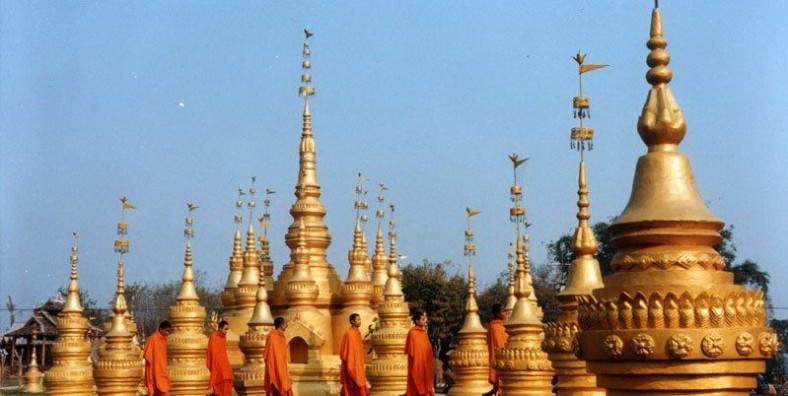 Xishuangbanna shares a 996km boundary with Burma and Laos, 550 km south of Kunming. Xishuangbanna Dai Autonomous Prefecture is a very attractive destination for tourists as well as important...

Xishuangbanna shares a 996km boundary with Burma and Laos, 550 km south of Kunming. Xishuangbanna Dai Autonomous Prefecture is a very attractive destination for tourists as well as important gateway to Southeast Asia. In addition, it is regarded as the Kingdom of Animal and Plant, with lush tropical forest containing varied wild lives. For your notice, many of them are rare. In the morning, drive in the south to Da Menglong, a small town close to Myanmar border, first see White Stupa, the most famous Theravada Buddhism Building of China aged over 800 years, symbol of Xishuangbanna. Drop in village of Dai and their temple. This area is still free from influence of big number of tourists, so peaceful and traditional. Further drive across basin of Da Menglong, up a long river valley to Bulang Shan, this area is close to Myanmar border, and inhabited mainly by ethnic groups, on the way we will visit Lahu nationality, who used to be a part of ancient nomadic tribe – Chiang, they stay out-of-the-way and still follow very traditional way of life. Continue driving across forest and along river valley from Bulang Shan to Menghun. Bulang Shan is the most original residential area of Bulang people, many of their traditional villages are situated along the road, we will stop randomly and walk into their village even their houses built on stilts to find out how their traditional life is going on, in addition short visit will also be paid to village of Ake people, with different language and costume, they used to be an unidentified ethnic group, now classified as a small branch of Hani. Stay at simple hotel in Menghun. In the morning, visit a village of Dai, where villagers are making paper with tree bark traditional way, their production looks primitive, and product’s rough, but because it’s firm and durable, was used a lot in the past to record Buddhism sutras by monks, nowadays adopted a lot by businessmen for packing local produce, tea for example, hence the technology is still living. Continue driving to Jingzhen to see Octagonal Pavilion, a meeting hall of senior monks originally built 300 years ago, one of 3 most famous Theravada Buddhism buildings of province, original construction was destroyed during Culture Revolution, existing one is a restoration in 1978. Near Menghai, drop in village of Muslim Dai, an exception from normal Dai ethnic group, they speak the same language as others, but following the traditions and taboos of Moslemism,  in the center of their village, we see mosque instead of Buddhism temple. On the way back, visit Aini village near Mount. Nan Nuo, a place reputed for tea of good quality, local Aini is good at tea planting and production, big number of ancient tea trees aged several hundred years are scattered around, and still bearing buds to benefit villagers. Return Jinghong and tour ends.