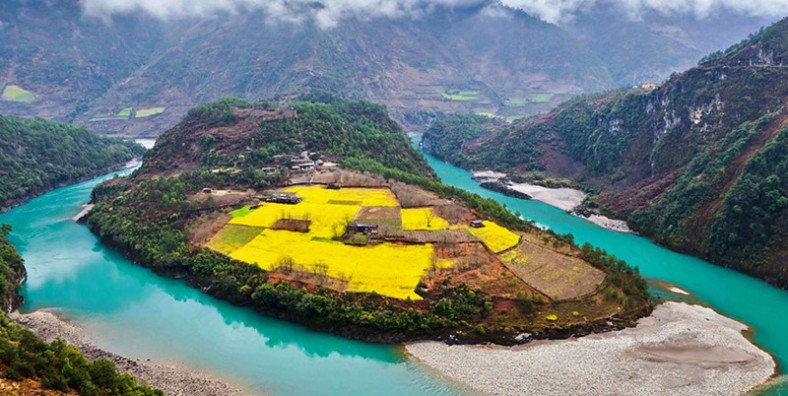 Nujiang is the only autonomous prefecture for Lisu ethnic minority. Nu and Dulong are minority groups unique to this region. Nujiang Grand Canyon is located throughout southwest China’s Yunnan...

Nujiang is the only autonomous prefecture for Lisu ethnic minority. Nu and Dulong are minority groups unique to this region. Nujiang Grand Canyon is located throughout southwest China’s Yunnan Province and flows into Myanmar, where it joins the Salween River and ends its journey at the India Ocean. The Nujiang Gorge running from northwest Yunnan to Tibet lies in a narrow strip of land bordering Myanmar, sandwiched to the west by Gaoligong Mountain range and the Biluo Mountain range on the east.

The name of the river is changed into the Salween River after flowing into Burma from China, and it finally empties into the Andaman Sea of Indian Ocean at the Moulmein. The upper reaches of the river are known as the Naqu River in Tibetan. The river is called Anurimei by the Nu ethic minority, Anu is the name of the Nu people called by themselves, the Rimei means the river, so Anurimei means the river dwelled by the Nu people. Drive from Liuku to Gongshan. On the way you can enjoy the beautiful landscapes of the Nujiang Grand Canyon with Tiger Leaping Gorge, the Flying Stones and the Stone Moon.

The 247-kilometer-long Nujiang River Gorge is flanked by two 4,000-meter-high mountains. The mountain peaks on the two sides have an average altitude of over 3,000 kilometers. The gorge is located in Yunnan Province in southwestern China, an area rich in ethnic minority culture. It is now a first choice for many domestic and foreign travelers.

The Dulong (also known as Drung) ethnic group is one of the smallest ethnic groups in China. With a total population of about 5,816 (data from the census in 2000), the Dulong people mainly live in the Dulong River Valley in the Gongshan Dulong and Nu Autonomous County in north-western Yunnan Province.

One full day excursion to Bingzhongluo, sightseeing includes the First Bend of Nujiang River(Salween River), the stone house of the Nu Nationality, Peach Island, the Tibetan Puhua Temple. You will then have the chance to visit a minority household and experience the life of the local people. There are easy and beautiful walks to nearby villages along the Nujiang. A few kilometers outside of town, the river widens and cuts through very deep and dramatic gorges. The road hugs the Nujiang and landslides occur from time to time along the way. It is said that the scenery is especially spectacular after rain, however this also increases potential delays and exacerbates the danger from landslides.

The most beautiful part of Nujiang Gorge starts from Binzhongluo, the northernmost town of the Gorge, where the essential attractions of the Nujiang Gorge are located. Hiking is the best way to enjoy the landscape and an average of 2.5 hours is needed for most tourists to reach the famous “Tea Horse Caravan Route.” Renting a mini bus at Bingzhongluo town is an alternative for the less adventurous sightseers.

On the way to the “Tea-Horse Caravan Route”, you can see the 100-year-old Zhongding Catholic Church built and founded by a French missionary. Shimen Pass is another fantastic section of the gorge along with Wengli (also called Wuli), another stunning landscape lying on a beautiful slope along the river bank. Very near to the Wengli, a carved path is seen on the other bank cliff, so-called “Tea-Horse Caravan Route”, a path used by traders ferrying their goods between Yunnan and Tibet. At the end of the trekking road, an old hanging bridge and a new bridge swing side-by-side. Leave Gongshan and drive 110km through the fascinating mountain areas to Fugong. Sightseeing includes a visit to a suspension bridge and a glide cable. Special Lisu food will be served during dinner. In the evening you will take part in a party with the local people.

Return to Liuku. Enjoy your last day at Nujiang Grand canyon and visit Laomudeng Village and the bathhouse of Lisu minority. It is a tradition to welcome new year that all people take a bath together in the open hot springs by the banks of the river.

Sightseeing and Activities: Departure from Liuku
Accommodation: None
Meals: Breakfast