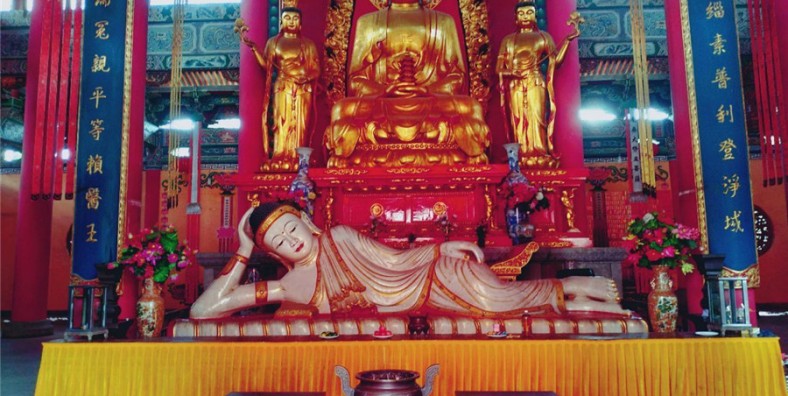 Why is Yuquan Temple So Special?

Yuquan Temple, located in Daying Street of Hongta District, Yuxi City, is adjacent to Yingyuetan映月谭 leisure culture center and Yingyuetan hot spring. It is a large-scale Buddhist activity site and a national AAAA level tourist attraction. The seven halls of Yuquan Temple are magnificent and grand in scale. The Buddha statue of Sakyamuni is 26.8 meters high and is the highest indoor Buddha in Southeast Asia. White jade reclining Buddha of Pharmacist hall weighs 16 tons, it is rare in the world. According to records, there was an ancient temple called “Yuquan Temple” more than 200 years ago. The present Yuquan Temple is a large Buddhist activity site and a national AAAA class tourist attraction expanded on the basis of the original Yuquan Monastery. In December 1998, it broke ground and was fully completed on May 26 2002. The architectural format has the typical style of Chinese Buddhist monasteries in the south. Although not rebuilt on the former site, the name is no changed, its scale is far beyond the original temple. There are lush trees, bamboos and magnificent palaces in Yuquan Temple. The 16-ton Burmese white jade sleeping Buddha is the remains of Sakyamuni when nirvana. There are the grand buddha’s hall大雄宝殿, heavenly king’s hall天王殿, the hall of patriarch祖师殿, pharmacist hall药师殿, Dizang palace地藏殿, hall of 500 arhats五百罗汉堂 and wealth hall财神殿, magnificent and quiet. In addition, there are also quadrangle courtyard, Monks’ dwelling, guest hall, long corridor, free life pool, incense paper storehouse and other ancillary building facilities, for devotees to meditate禅修, incense上香, free life放生, get accommodation and rest. The four Chinese characters “福田妙果(Fu Tian Miao Guo)” on the front of the Jiulong Wall is written by famous Confucian Zhu Ming朱明 in Yuxi. Fu Tian(福田) is representative of the heart and soul, doing good deeds without begging to do, so that people can get the greatest blessing, what goes around comes around. Nine dragons totems of Jiulong Wall in China has the meanings of disaster prevention, peace, auspicious, fortune and so on. It symbolizes wealth, divine power and prosperity. In the feudal dynasty, nine dragons represented imperial throne.

Kindness, abstinence from killing can make people live longer and eliminate disasters. In order to reflect Buddhism’s benevolence, Yuquan Temple built a free life pond, so that believers can free a variety of aquatic animals such as fish and turtles. There are nine stone lotuses in the pond, representing the purity of the Buddha. The temple enshrines the statue of wealth God, the traditional folk deity of China. The wealth God is one of the five auspicious gods. Wealth Bodhisattva is the god in charge of the world’s wealth. The fifth day of the first lunar month is the birthday of the wealth god. Every New year, each family hangs wealth god figure, hoping the wealth god to bless a great fortune.

Yingyuetan Hot Spring upholds the natural style, carries forward health, leisure and ecological balance. It combines the most traditional hot spring culture and the latest concept of healthy leisure, coupled with the most considerate, sincere service to every tourist.

Yingyuetan leisure culture center is built by Yunnan Yuxi Tipping Paper Factory, the largest production enterprise of tipping paper in Asia, covering an area of more than 300 mu. It is a tourist service enterprise which integrates bath, accommodation, catering and tourism.

Yuquan Temple visit is mainly indoor activities, therefore tour is possible all the year round.

The fastest way to get to Hongta District of Yuxi is by train. And then, there are many taxis and minibuses at Yuxi Station you can choose to get to Yuquan Temple. 1. Hongta district is the government seat of Yuxi, so all aspects like transportation and accommodation are more convenient.

One thought on “Yuquan Temple in Hongta District, Yuxi”