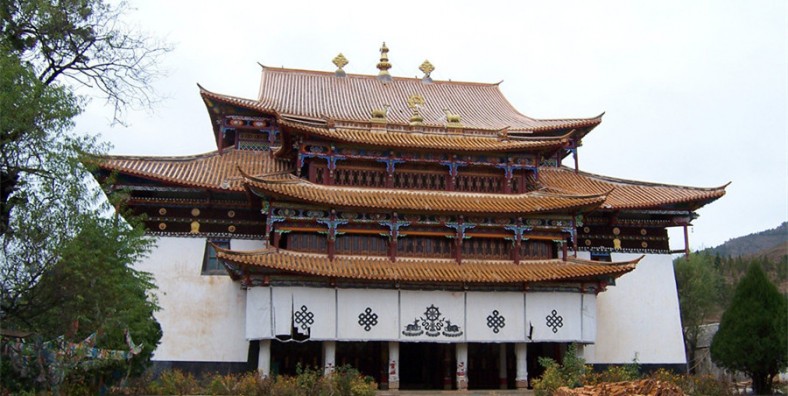 Zhamei Lamaist Temple Mosuo Yunnan is the largest and Pumi Tibetan Buddhism (commonly known as Lamaism) temple. Temple occupies the entire 24,000 square meters, the main hall of the main building, about Piandian, were three pavilions, civil structures, Houqianghuangwa, erected a gold-plated copper roof, the magnificent, become a spectacular. Piandian the west, the plastic is about 12 meters high gold-plated seated Maitreya, the Buddha five crown headdress, holding wishful Baozhu, clay sculpture is a typical Tibetan style. Piandian within the four walls are painted six murals for the change of Buddhism, fine lines, colors Ming, modeling lively, with murals of the same Tibetan areas of Sichuan, not Han Buddhism and Taoism and the impact of murals. Around the great hall, surrounded Sengshe, formed to Zhudian as the center of the complex. The original more than 700 monks, are Mosuo and Pumi. Temple in the “Cultural Revolution” movement have been destroyed, only one Piandian. 1986, the fund-raising by the local religious figure, the state appropriate subsidies, as is rehabilitation of the main hall. Is the basic repair, a monk of more than 100 people.

Zhamei Lamaist Temple located in Yongning Township Pijiang Street at the foot of mountains northwest of Goulburn, Yunnan Province is now the focus of heritage conservation units. Karmapa Living Buddha from Tibet, was built in Ming Dynasty, the temple were originally Gaju Pai. Legend has it the white founder Karmapa visits Xikang, via Yongning, that the location of the Temple Mosuo language known as the “ÔúU.S. Ge”, Tibetan, who happens to be “peaceful” means, a decision in this Jiansi. – Yongzhengnianjian expansion, reform in the Gelug Sect, is the Gelug Sect (Yellow Sect), the temple. Tsongkhapa, founder of the faction known as the religious theory Gandan will Lu, Lu Gan were referred, said after the evolution of Gelug Sect, which means the good (or good law) sent to the camp named after advocating strict discipline; Because of the monks were wearing yellow Mitral, was commonly known as the Yellow Sect.

Zhamei Lamaist Temple Monastery serving the main benefits Luosang history of the Living Buddha, was born in Nanjing Yongning County Apgar Chieftain Mosuo families of Wing Ning Zongguan A few clouds brother, 3-year-old was considered to be at Chek straight microphone Sichuan Daocheng of the Living Buddha Reincarnated soul boy, 12-year-old into Lhasa, Tibet’s Drepung Monastery of San Dasi one of the 26-year-old Living Buddha of the Drepung Monastery for 28 years (1955) to return to Yongning Temple Zhamei Lamaist Temple of the Lord now. He incumbent member of the Chinese Buddhist Association, member of the governing Buddhist Association of Yunnan, Lijiang Prefecture CPPCC vice chairman of the Work Committee. The largest extant Tibetan Buddhism temple in the Mosuo area is Zhamei Monastery in Yongning. It originally was a Gelug Sect (white sect) temple, and later was transformed into a Gelug Sect (yellow sect) temple during the reign of Emperor Yongzheng during the Qing Dynasty (1644-1911).
According to legend, Karmapa, founder of the white sect, made an inspection tour in Xikang. He passed by Yongning Monastery and learned about the sect. Zhameige in the Mosuo language means peace in the Tibetan language. The mountain behind the monastery, known as Zengmiwa in the Mosuo language, is pronounced the same in the Tibetan language. So he decided to build a monastery here.
Different from the lama temples reformed by the Mosuo ethnic group near the ancient city of Lijiang, this monastery is a traditional Tibetan Buddhism temple. However, it also enshrines and worships the Gemu goddess, which symbolizes features of the Mosuo people.
The monastery was ruined during the Cultural Revolution in the 1960s. Only a side hall exists. In 1986, the main hall was restored. The monastery has basically regained the original appearance. It is home to at least 10 monks. The abbot of the monastery, Luosang Yishi Living Buddha, was born to the Ashi headman family of the Mosuo. He started to learn Buddhism at Zhaibung Monastery, one of the top three monasteries in Lhasa in the Tibet autonomous region, at the age of 6. He obtained Zhaibung Monastery Living Buddha qualifications at the age of 26. In 1955, when he was 28 years old, he returned to serve as the abbot of Yongning Zhamei Monastery. He still serves as the abbot. He also is director of the Chinese Buddhists Association and vice-chairman of the Lijiang municipal people’s political consultative conference.

Others Attractions near Zhamei Monastery

● lugu lake: A misterious and see colorful Yunnan of China, you can see the Mosuo People to expolore the unique culture and lifestyle. How to Get in Zhamei Monastery

Departure Time: Every morning at 08:15 am

Departure Time: Every morning at 08:00 am

This is no train station in Ninglang County. So tourists can take the train to Lijiang or Xichang and then transfer to Ninglang County by bus or by car.

Where to Take: Lijiang Bus Station(丽江客运站)

Where to Take: Yongsheng Bus Station(永胜客运站)

It is feasible to rent a car to travel from Ninglang Coutny to Zhamei Monastery. We can offer car rental service, and if you need a private car in Yunnan Province, please feel free to contact us. Our cars/ vans are new, safe and comfortable. Our drivers are skilled with several years of driving experience on the hill path.

There are many minibus heading to Zhamei Monastery.