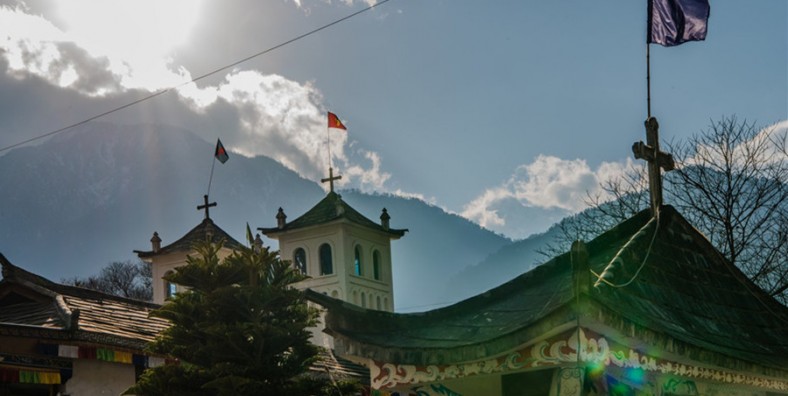 Zhongding church is the most famous church in Bingzhongluo area, which was built in 1908 by French missionaries Annet Genestier and modelled on the Catholic church in Hong Kong, large and beautiful. It was destroyed during the "cultural revolution" and rebuilt in 1996.

Why is Zhongding Catholic Church So Special?

Zhongding church is the most famous church in Bingzhongluo area, which was built in 1908 by French missionary Annet Genestier and modelled on the Catholic church in Hong Kong, large and beautiful. It was destroyed during the “cultural revolution” and rebuilt in 1996. Smaller than the original church, the inside of the church is very simple, with a number of long wooden benches, and faded paintings hung on the wall. Behind the church is a simple little grave hidden by the trees where the missionary who built the church was buried.

Where is Zhongding Catholic Church – Location

In the late 19th century, French missionary Annet Genestier arrived at Bingzhongluo from Kangding to built church. In 1921, he purchased another piece of land in Zhongding village of Bingzhong township. It took more than ten years to build a new opalescent church symbolizing holy and pure, in two mini Notre Dame de Paris, finally completed in 1935. Unfortunately, it was destroyed during the cultural revolution and rebuilt on its original site in 1996, much smaller than the original one.

In 1937, Annet Genestier died in Zhongding village. He lived in Bingzhongluo for nearly 40 years. The villagers had placed his tomb on the right side of Zhongding church, very humble with a wooden cross, even without an epitaph, but he rested in the closest place to god. When it was repaired in 2005, two small gravestones were added to its two sides, inscribed with his simple life story: Annet Genestier was born on April 16, 1856 in Clermont, Puy-De-Done of French. He came to Tibet for preaching in 1886 and built churches in Bingzhongluo of Gongshan county in 1898. He died at Zhongding Church in 1937 at the age of 81.

Built in 1935, it took about ten years to finish the building. It is the most brilliant, most spectacular building in Gongshan area. The pillars in the hall are made of white marble. The whole church was a great square quadrangle yard, with residential buildings on both sides, and the middle of the church was very tall, with a height of about 25 meters, and the church could accommodate thousands of people.

By Bus
The only access to Bingzhongluo by road is from the south via Liuku, Fugong and Gongshan. A direct bus to Liuku leaves at 8 am every morning from the front of Yudong Hotel. It stops briefly at Gongshan, then long enough at Fugong for a quick lunch. Two buses leave from Liuku at 6:20 and 8:20, arriving in Bingzhongluo in the afternoon. The trip takes 8 hours though schedules sometimes vary so it’s best to check before buying your ticket. The First Gulf of Nujiang River(怒江第一湾)

When Nujiang River flows through Ridan Village of Bingzhongluo, it is obstructed by Wangqing Grand Cliff so that Nujiang River is forced to flow in east-west trend instead of north-south trend. After running 300 meters, Nujiang River is cut off by Danla Mountain so it turn round from west to east. Hence the half-round gulf of Nujiang River.

In the north of Bingzhongluo, two cliff straight up along the river bank and form a large stone pass in the height of 500 meters and in the width of 200 meters hence the name ‘Shimen Pass’. Shimen Pass is a stunning landscape lying on a beautiful slope along the river bank. The local people call it ‘Nayiqiang’. It is the essential way to get into Yunnan-Tibet.

Qiunatong(秋那桶)
It is the last village on the north end of the Nu river valley, as it continues north into Tibet, so it’s also the only route into Tibet. Qiunatong canyon is the most beautiful part of the Nujiang grand canyon, covered with dense virgin forest and numerous waterfalls.

Kantong Village(坎桶村)
Kantong village is located in the center of the First Gulf of Nujiang River. It is a little village of Nu people and Kantong means a place of long bamboo. The village is planted with peach trees. Every Spring, the peach blossoms pervade the village so that the local people call it ‘Peach Blossom Island’. There is the only suspension bridge that connects the village to the outside world.

Puhua Temple(普化寺)
Puhua Temple, a Tibetan Buddhist temple, plays an important role in this place. Inside the temple, there are 11 frescoes and 2000 ‘Songji’ in total.