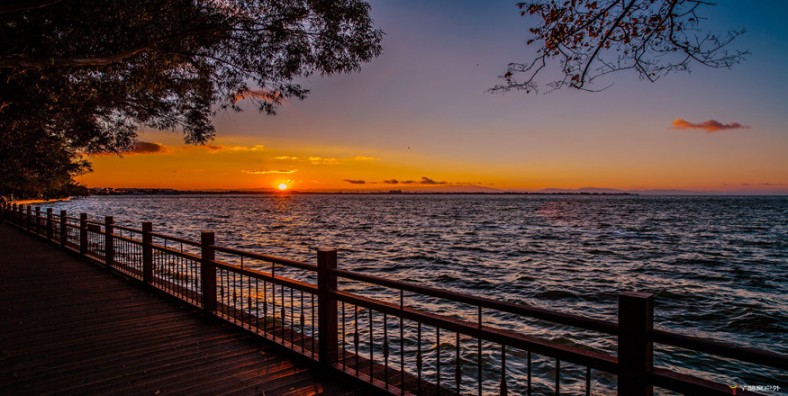 Why is Dianchi Lake so special?

Embraced by several peaks and alluring waters, Dianchi Lake is just like a sparkling jewel embedded in Kunming. The lake is crescent-shaped, stretching 24 miles (39 kilometers) from north to south and more than 8 miles (13.5 kilometers) from west to east. Occupying an area of 116 square miles (300 square kilometers), Dianchi Lake is the largest lake in China. More than 20 rivers converge into it.

The Dianchi Scenic Area is quite mesmerizing, where natural scenery and human landscape blend perfectly. It can be divided into two districts, namely West district and East district. What makes Dianchi Lake distinctive is that the color of its water changes with the clouds and sunshine of the day. Around Dianchi Lake also lie many places of interest, such as West Hill, Daguan Park, Yunnan Ethnic Village and so on. These featured attractions are all ideal getaways for visitors to get close to nature to relax. the History of Dianchi Lake

The Chinese character for the lake is a phonosemantic compound of the radical 氵 (“water”) and the character 真, whose current pronunciation is zhēn but whose Old Chinese pronunciation has been reconstructed as tin.

Dianchi Lake was the site of the capital of the independent kingdom of the Cuan (爨) during the first millennium AD. At that time, it was known as Kunchuan (昆川).

Together with other Yunnan lakes (Fuxian, Qilu, Yangzong, Xingyun, and Yilong), Dian Lake is recognized as an ecoregion. Among three major Yunnan lakes with a high number of endemics, the two other being Fuxian and Erhai, the most drastic loss of biodiversity has been seen in Dian. Of the 25 native fish species and subspecies in Dian Lake, 10 are endemic to the basin: Acheilognathus elongatus, Anabarilius alburnops, Anabarilius polylepis, Cyprinus micristius micristius, Liobagrus kingi, Pseudobagrus medianalis, Silurus mento, Sinocyclocheilus grahami, Sphaerophysa dianchiensis and Xenocypris yunnanensis. Today the only endemic fish known to survive in the lake itself is Anabarilius alburnops, but it is endangered. The remaining have not been recorded there since the 1990s or earlier, and most of these are likely extinct. Two other species, Schizothorax grahami and Yunnanilus nigromaculatus, are endemic to the general region, but have also disappeared from Dian Lake itself. Among the non-endemic natives, only gold fish and Asian swamp eel still live in Dian Lake. In contrast to the status of the natives, the lake is now home to more than 25 introduced fish species. The Yunnan lake newt (Cynops wolterstorffi) was endemic to the lake, but it has not been seen since 1979 and is considered extinct. Many native hydrophytes have also disappeared from the lake.

Pollution Management of the Dianchi Lake

The pollution and the management of it is the eternal but sad topic of the province and government. Although the country and some global administrations like the World Bank have invested lots of money to help the progress of pollution management and have made some environmental improvement at Dianchi Lake, it can not completely solve the problems of pollution. Dianchi is still one of the most serious polluted lakes in the world, guests may find the water is of extremely green color in the lake. For the comfortable weather in Kunming, it is suitable to have trip here all the year round. What special in winter is that sea gulls will come to winter here and most of the local people will enjoy their time with sea gulls, such as taking photoes and feeding sea gulls.

How to Get here?

Take a taxi to the Haigeng Park (near Dianchi Lake)costs about RMB25 yuan, it is about 12 kilometers from the Nanping Pedestrian Street of Kunming.

There is special line for traveling to Dianchi, you can take that car in the city center.

If you want to get rid of hustle of public transportation and troublesome navigation, you can book a private tour package which covers sightseeing, dining and transfer from us. Our local tour guide and driver will escort you to Dianchi Lake with speed and convenience, and take care of all the details. You just need to focus on sightseeing.

Tourists can not only visit Dianchi Lake, but also can visit some famous attractions near it, such as West Hill Forest Park, National Sport Training Centers, Yunnan National Museum, Yunnan Minorities Village, Daguan Park and other attractions, they are very close to the lake.

Yunnan Ethnic Villages ( 云南民族村)
The Yunnan Ethnic Village acts as a good shortcut to understand the social customs of the ethnic groups in Yunnan. It has a natural sun-bathing area where you can escape from the heat of summer. Twenty-five ethnic nationalities have their respective villages and conduct many activities to present their unique folkways and beautiful clothes. Also you can enjoy the water screen movie and an elephant performance, have a taste of the local dishes and buy pretty handicrafts.

Daguan Park (大观园)
Daguan Park is vibrant with rock gardens, pavilions, bridges and murmuring water. It is famous for the longest couplets in China on the Daguan Pavilion (dà guān lóu 大观楼). The Daguan Pavilion was built in the year 1828. It commands a lovely view. The couplet written in the Qing (qīng 清) Dynasty (1644-1911), contains 180 characters brimming with literary grace. During festival evenings, gatherings take place here

Baiyukou Park (白鱼口公园)
Baiyukou Park is on the west bank of Dianchi Lake. Here a small hill looks like a white fish opening its mouth to Dianchi Lake. Near the Irregular shore line, beautiful gardens are hidden among green trees. In spring, the cherry trees are in blossom, adding luster to this serene place. Overlooking Dianchi Lake, you can see white sails of boats on the glistening lake and gulls skimming over the waves.

Haigeng Bank (海埂)
Haigeng Bank is about four kilometers (2.5 miles) long while ranging in width from forty meters (131 feet) to three hundred meters (984 feet). The bank, like a floating jade belt, is in fact a watershed of the Dianchi Lake. Slender willow twigs sweep the lake in the gentle breeze. In the south is a wonderful natural swimming pool which is always crammed with people in midsummer.

Kwan-yin Hill(观音山)
Kwan-yin Hill is bordered by the vast lake and has an altitude of 2,040 meters (6,693 feet). Lofty peaks on this hill seem to thrust themselves straight towards the sky. A Kwan-yin Temple built here in the Ming Dynasty (1368-1644) was once a popular resort of Buddhism. Remaining are a seven-tier brick pagoda, houses, and a gate to the Kwan-yin Temple.How to get there: A Taxi ride to the northern section of the lake near Daguan Tower lakeside from the city center should cost you a mere Y15. You can also take bus 24 , 44 and get off at Haigeng Bank.

Top 3 Dianchi Lake tours chosen by most customers to explore Dianchi Lake in the best way. Check the detailed itinerary, or tailor your own trip now with us. We provide some tour routes for tourists to choose.

1.Recommended travel itinerary in Kunming including the Dianchi Lake: Visitors can firstly go to the West Hill Forest Park for a visit, then take the cable car from Longmen (the gate of the dragon) to Dianchi lake (Ticket price at RMB30).

2.There is no entrance fee charged at the Dianchi Lake, the entrance fee for Haigeng Park is RMB8 yuan. If guest do not want to take boat during the visit, a half day is enough for a visit to Dianchi Lake. If you want to explore the lake further, you can rent a bicycle and spend two days to cycle around the Dianchi, it is about 200 km.