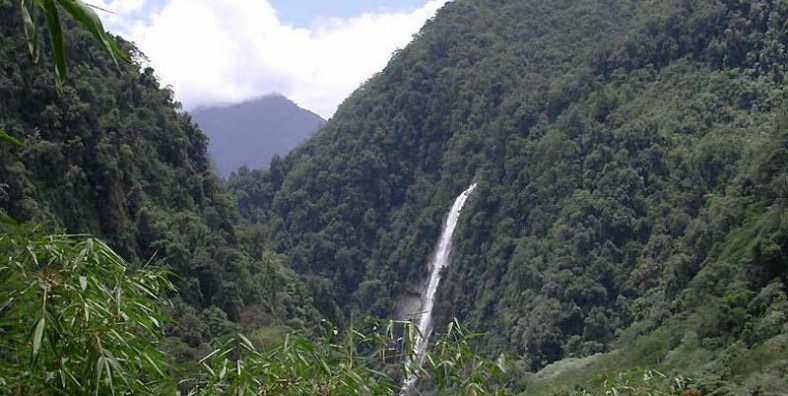 The Moon waterfall is on China's side of the China-Myanmar border in the lower reaches of the Dulong river, about 3 kilometers away from the border. It's also known as Hapang waterfall.

The Moon waterfall is on China’s side of the China-Myanmar border in the lower reaches of the Dulong river, about 3 kilometers away from the border. Also known as Hapang waterfall(哈旁瀑布), Moon Waterfall is located in the town of Dulongjiang, 30 kilometers away from Bapo(巴坡). In Dulong language, it is called ‘Habayicheng(哈巴依称)’, meaning shiny water falling from the sky. From 3,100 meters to 1,400 meters above sea level, Hapangwang(哈滂王) river suddenly fell, forming a drop 200 meters high and 20 meters wide. On every October night, the moon irradiates the waterfall and the waterfall also reflects the moon, with Chang ‘e dancing and water’s singing. That’s why called Moon Waterfall.

On the high ground in Qinlangdang(钦朗当) village, you can see the waterfall flying down in the direction of the boundary, which is Moon Waterfall. After walking about half an hour on the path to No.41 boundary monument, you’ll be under it. A huge stream of water, gushing from a breach more than 120 meters high, falls on the rocks along the Dulong river. Under the sunlight, the seven colors of rainbow, green mountains and rivers reflect each other, making a colorful, majestic landscape painting. Moon waterfall is said to vary greatly in water, only about 20 meters wide. By the time of the rainy season in May and June, the water was quite large, and huge columns of water were roaring down. The high water column straight rushes into the Dulong river and make a thunderous loud sound. The huge waves of air rushed to the opposite shore of the Dulong river more than 100 meters away, shaking the branches of the whole slope.