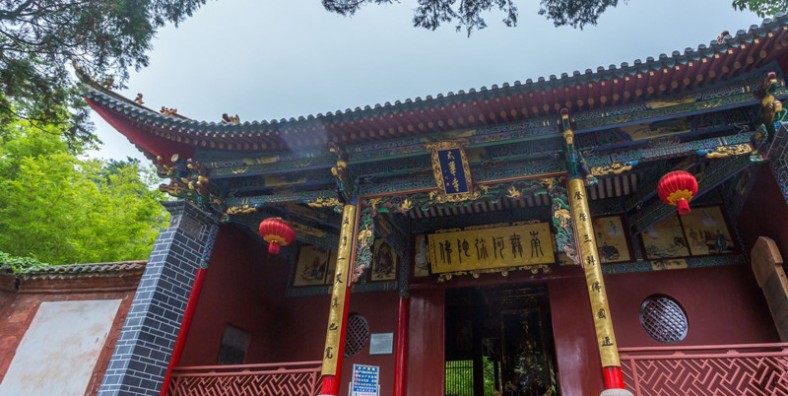 The magenificent and solemn Taihua Temple is located on the mountiainside of Taihua Hill in Kunming Xishan Forest Park. Taihua Hill has Dianchi Lake to its east, Huating Hill, Biji Mountain to its north. It is the highest peak in the Western Hills.

The History of Taihua Temple

Outside the mountain gate, a ginkgo tree, tall and bulky, according to legend it was planted by Ming dynasty emperor Jianwen personally. Emperor Jianwen is the eldest grandson of Ming dynasty’s founding emperor Zhu Yanzhang, after he succeed to the throne he started weakening the vassal states because vassals maintained armies and defy orders from the central government. But he was not capable and experienced as Emperor Kangxi in the later Qing dynasty, King of Yan Zhudi was provoked and has sent his troops to siege and attack Nanjing. City was broke through, “the palace was on fire, and the emperor has not to know the whereabouts.” From then on, Emperor Jianwen’s whereabouts has been a riddle. In fact, Empeoror Jianwen was most likely run out of the palace and became the monk living on the Yunnan-Guizhou region. It was said that Emperor Jinwen was stayed in Taihua Temple as monk for 5 years, though these hearsays were not written in the official history, but heardays may not be entirely groundless. Throughout Taihua Temple, it experienced the vicissitudes of life and is still standing, towering and majestic.

Taihua Temple sits west and face the east. It is in broad scale and rigorous layout. The courtyard and turret shows a multi-ethnic tradition bucket structure. In the temple, pavilions, galleries, pools merge in to a picture, quiet and tranquil. Taking the Mahavira Hall as the center, the two side has verandas connecting with the pavilions. The entire architecture area of the temple is 3562 square meters. The style of the architecture is between Beijing palace garden architecture and Suzhou garden style.

The main architecture is the Heavely King Hall with single eaves jehiel. It is 3-room wide, and 2-room deep, covering an area of 367.5 square meters. The middle of the hall is a wood carving Avalokitesvara Statue with his hands clasped together, standing on a lotus shrine. It is about two meters high.

The highest point of Taihua Temple is the famous Mercy House, built in the Qing Xianfeng years. Later it was ruind, and In 1883, it was renovated, covering 582 square meters. There is now worshipping three bronze Buddhas: Dharmakaya Vairocana, Sambhogakaya Lushena Buddha, and Conduct Sakyamuni Buddha. Each Buddha is 2.8 meters high with charity face and golden body. Taihua Temple, also known as the Foyan Temple, was founded by the first Yunnan Zen master Xuanjian. The king of Liang state gave temple the name Foyan Temple, but later name after Taihua Mountain. It has went through over seven hundred years wind and rain erosion, years of vicissitudes of life and destroyed by war, and in Ming and Qing dynasties it was expanded and repaired for many times, but the main temple is still keeping the Yuan dynasty architectural style.

Taihua Temple is facing east, and it has a large scale and rigorous layout. Pavilion, gallery and pool inside the temple what is quiet and beautiful. Centered on the Great Buddha’s Hall, there are two verandas aside the hall, connects with two wing pavilions, all building covers an area of 3562 square meters. The construction art is distinctive, its style is between Beijing palace garden construction and artificial garden architecture in Suzhou.

Stepping up, the first thing you encounter in is the middle of stone memorial archway banner with carved characters “峻极云霄 (to high to touch the sky)”, and there is a couplet in the stone column which expressed the earnest concern to the society by the Buddhism.

What to See in Taihua Temple?

Hall of Heavenly King: Hall of Heavenly King is single hipped-gable roof, it is three rooms wide, two rooms deep, the hall is nearly 20 meters high, covers an area of 367.5 square meters. A wooden carving Buddhism goodness Guanyin is in the middle of the hall with hands folded, look kindly, well-dressed standing on the lotus shrine, it is about two meters high, and it is the remain of Qing dynasty emperor Kangxi period. Both sides of the hall are famille rose four heavenly kings statues with majestic looks, all as high as three meters. Weituo wears golden armor on the back of the hall, which shows the dignity of guardian deity, and it was said that this statue was created by Li Guangxiu in Qing dynasty Guangxu period, whose creation technique focuses on mental state and the inner world, image lifelike and guileless that closer to the characters in real life. Dabei Pavilion (Great Mercy Pavilion): The highest place of Taihua Temple is the famous Dabei Pavilion, built in the reign of Xianfeng in Qing dynasty and later it was destroyed by war. In ninth year of Guangxu period (1883) the temple was repaired, covers an area of 582 square meters. Now the pavilion contains three of copper Buddha statues, Dharmakaya Mahavairocana, sambhogakaya Vairocana Buddha and Shakyamuni Buddha and each 2.8 meters high, they were remains in Kangxi period.

Sizhao Room: Taihua Temple has many annexes. Originally in the north of the Great Buddha’s Hall was “Sizhao Room” which was the ancestral temple of Lord of Guizhou Muying in the early Ming dynasty, and in recent years it has rebuilt into cold drinks and tea house. South of the Great Buddha’s Hall is “Yingbi Shed (reflecting green)” which is a pavilion in the south of storied building and stretched into the pond. Square pond is about two mu (a unit of area =0.0667 hectares), divided into two pools with a rockery ornament, and zigzag veranda, mountain, water, building, corridor is surrounded the pond which makes it beautiful.

Wanqing Building: “Wanqing Building” in the east side of the Great Buddha’s Hall, its wall was written “世济其美 (Refers to the offspring inherit the virtue of former generation)” by Qing emperor Kangxi. In here you might feel like place oneself in the mirage. Taihua Temple has many varieties of flowers, the flourishing flowers is blooming like a piece of brocade. The red fire of camellia, graceful white magnolia, magnolia liliiflora, magnolia diva stapf; the plum blossom is full of branches in the New Year, and is full of courtyard. Breeze blowing, the flowers are fragrant and refreshing, just like place oneself fairyland.

How to Get to Taihua Temple?

It is inside the Western Hill Park, people can take public bus No.6 in the city to there.

Huating Temple: Huating Temple is located at Xishan Mountain Forest Park in Xishan District, Kunming City, Yunnan Province. Different from other temples, it faces east not south. The temple was frist built in 1063, during Song Dynasty, covering an area of 12,000 square meters in rectangle. The temple is axisymmetric and closed courtyard type. Huating Temple is the largest temple in Yunnan province. It was released as one of the kunming municipal cultural relics protection units.