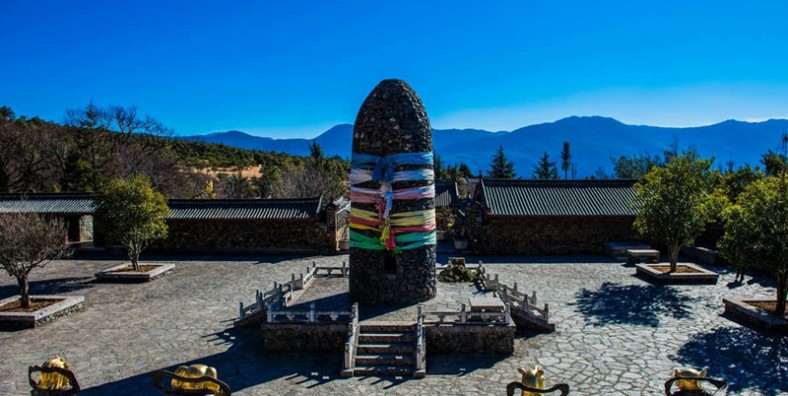 Yushuizhai is under the foot of the Yulong Snow Mountain, facing the Lijiang Ancient Town, which is o­nly 15 kilometers from the city. Jade Water Village is the Dongba Holy Land in the central part of the Naxi Nationality and it is the trace of Lijiang City. The American Nature Conservancy Association designated Jade Water Village as the inheritance base of Dongba Culture and Baisha Music Heritage Base and the inheritance base of Leba Dance, which is to carry out the excavation, arrangement, inheritance, research and display of the ancient culture of Naxi.

What to see in Jade Water Village

There is a Sandieshui Waterfall(三叠水), which is an important symbolic meaning in the Naxi culture system. From the spring eyes of the Naxi people’s living water, the architectural structure, to the banquet, and the costumes. The cultural connotation of the “Shenlong Sandie Water” is running through.

The Dongba Culture Heritage Base of Jade Water Village retains the traditional and simple style of the Naxi people and complements the beautiful natural landscape around it. It truly reflects the traditional concept of “the harmonious development of man and nature” and the true meaning of Dongba culture. There are three famous Dongba masters in the scenic area to conduct daily affairs. There are several Dongba students studying Dongba Scripture, Dongba Dance, Dongba Sacrificial Ceremony and Dongba Art in Jade Water Village. On the 5th March of the lunar calendar, Dongbas in the entire Naxi area gather in Jade Water Village and hold the annual Dongba Shiluo Conference in the Dongba Shiluo Temple. First, in order to improve the inheritance of Dongba culture, the Dongba Shiluo Hall, the places to sacrifice heaven, the guardian (natural god), and the ritual winds were built.

Take the No. 8 bus to the Jinjia market (the fare is 5), and transfer to the minivan (the fare is 5 yuan) to go to Jade Water Village.

What to Pack
Travel light when strolling in the old town. Bring a camera with you that you can take photos along the way. Sunlight is very strong in Lijiang, wear sun protection such as hats, sunglasses and use sun block, etc.

Photography Tips
To shoot some amazing photos of Jade Water Village, photographers should not miss Naxi architecture and Naxi Ancient Music performance. It is better shoot in the early morning and late afternoon.